The insinuation that Medicare for All would somehow leave people currently insured under a private company behind elevates a popular right-wing talking point used to dissuade Americans against single-payer health care.

October 17, 2019 Celisa Calacal Independent Media Institute
Printer friendly
How the Mainstream Media Tries to Convince You That Medicare for All Is Impossible Published October 17, 2019 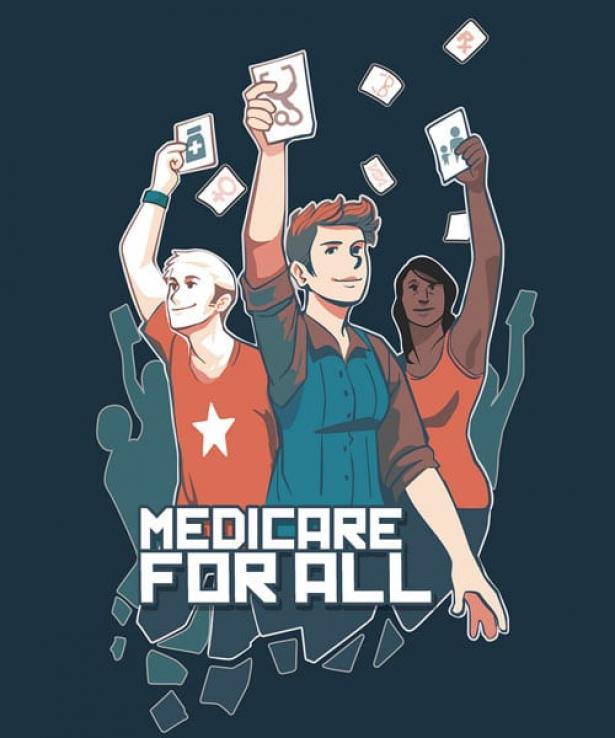 A Reuters poll last year, found 70 percent of Americans (including 52 percent of Republicans) support “Medicare for All,” as universal healthcare now has been branded, was received with surprise by many. But this finding—should not have been unexpected, Graphic: "Medicare for All,” Juhan Sonin; The Nonprofit Quarterly (NPQ)

Despite numerous polls showing a majority of the public supports a Medicare for All, single-payer health care system, reports from mainstream media paint a different picture. In a New York Times election piece from February on the Democratic candidates’ stances on health care, Alexander Burns explains that Medicare for All “would require so much public funding and would force many people who like their existing health insurance to change plans.” Another New York Times article by Margot Sanger-Katz claims that Medicare for All “would do away with all private health insurance.” Chelsea Janes and Michael Scherer in a piece for the Washington Post even go so far as to say that moving the U.S. to a Medicare for All system could be “just as disruptive as the GOP’s push to kill the ACA.”

This kind of framing and description of Medicare for All—that it would eliminate private health insurance and force people off their current plans—pervades the mainstream narrative around single-payer health care. The problem, however, is that these descriptions are half-truths. Yes, a Medicare for All plan, like the kind proposed by Sen. Bernie Sanders and what most of the media refer to when talking about single-payer health care, would end up eliminating private health insurance. But, it would do so with the purpose of putting every person in the U.S. on a government-run plan to ensure that every person would have adequate health care, only without the exorbitant out-of-pocket costs that have become commonplace in our current health care system.

What results from this kind of obscuring and omitting of information is a narrative that misleads the public into believing that a Medicare for All plan would ultimately hurt them. In addition, the implication that the fight for Medicare for All would be “just as disruptive” as the Republican Party’s attempts to gut the Affordable Care Act is a faulty comparison—wanting to kick more people off their health insurance is nowhere near the same as wanting every person to have adequate health care coverage.

Another common mainstream media trope about Medicare for All is that such a plan would hurt the people who receive health insurance from their employer. But what this line of thinking ignores is how Medicare for All would make it so that Americans would not be reliant on their jobs or their employers for health care.

Televised news is also guilty of being misleading when it comes to describing Medicare for All. During the second Democratic primary debate hosted by CNN, moderator Jake Tapper asked Bernie Sanders: “You support Medicare-for-all, which would eventually take private health insurance away from more than 150 million Americans in exchange for government-sponsored health care for everyone. Congressman [John] Delaney just referred to it as bad policy, and previously he’s called the idea political suicide that will just get President Trump reelected. What do you say to Congressman Delaney?”

The insinuation that Medicare for All would somehow leave people currently insured under a private company behind elevates a popular right-wing talking point used to dissuade Americans against single-payer health care. But by peddling half-truths about Medicare for All and single-payer health care, the mainstream media unfairly characterize the policy as both extremely unpopular and terrible for the country.

The reality, however, is far different, as many public opinion polls show a widespread majority of Americans supporting a Medicare for All system. Many articles in the mainstream press fail to mention this, and the pieces that do are also quick to include polling showing that support for Medicare for All decreases when people are asked if they would still support the plan if it means getting rid of private health insurance.

In a Washington Post piece from August, “Why 2020 Democrats Are Backing off Medicare-for-All, in Four Charts,” Amber Phillips cites a July poll conducted by the Washington Post and ABC News showing that, while 52 percent of Americans and 77 percent of Democrats like Medicare for All, support drops (to 43 percent for all Americans, 66 percent for Democrats) when respondents are told that such a plan would eliminate private insurance. Phillips goes on to write that an NPR/PBS News Hour/Marist poll from July shows that a public option is more popular than Medicare for All among Americans.

But that is not the entire story of how Medicare for All would impact Americans, and it’s not the full story of public support for such a policy.

The results from all voters regardless of political party are telling: support for Medicare for All drops from 53 percent to 46 percent in response to the first question, but then increases to 55 percent when the respondents were told that Medicare for All would allow people to keep seeing the same doctors and going to the same hospitals. Between the two questions, the latter is actually a more accurate representation of public sentiment of single-payer health care, because it does a better job explaining one of the basic tenets of Medicare for All to voters: As Diane Archer explains on Common Dreams, Medicare for All “will provide all Americans their choice of doctors and hospitals anywhere in the United States.”

Through public opinion polling, it’s clear that once Americans know the facts about Medicare for All, they support the plan. In fact, the biggest hurdles to getting Americans better health care are not found in the Medicare for All plan itself, as some news outlets would claim; they lie in getting the media to present all the important data when it comes to reporting the popularity of Medicare for All.

[Celisa Calacal is a freelance journalist based in Kansas City, Missouri. She is a writing fellow for the Independent Media Institute. She graduated with a degree in journalism from Ithaca College, where she worked as an editor and reporter for the Ithacan. Her writing has appeared in the Nation, ThinkProgress, AlterNet, and Salon. Follow Celisa on Twitter @celisa_mia.]