tv Without Rose Byrne, The ’80s Aerobics Drama Physical Would Be Unwatchable

Physical spends a lot of time pinning aerobics to capitalism and how it would violate the leftist politics the protagonist thinks she stands for. 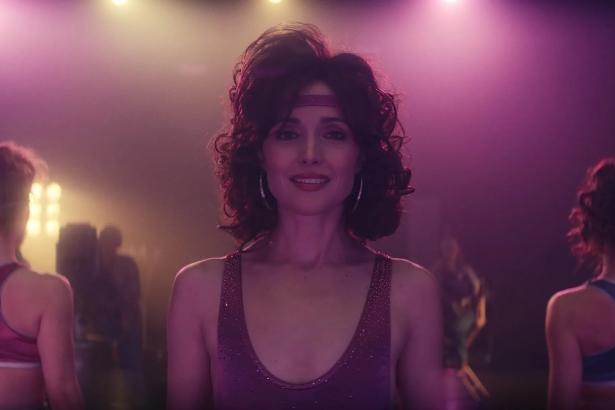 I’ve found Elle Woods’s theorem to be generally true, that people who exercise are happy. I’ve also yet to meet a murderer at fitness class. But in the new AppleTV+ aerobics period piece Physical, starring Rose Byrne, exercise is less about creating happiness than it is about making the life you live a little less painful.

The most surprising thing about the 10-episode series, created and written by Annie Weisman, is just how unpleasant it’s willing to get to make that point. An example: Physical often smashes emotional distress and queasiness into brutal sequences where Sheila (Byrne) binges and purges hamburger combo meals to enact vengeance upon her own unhappiness. It’s a dramatic turn from how the show has been marketed as a campy ’80s paean to aerobics starring the mean woman from Bridesmaids.

Physical is not for everyone, and it’s very close to being not for anyone at all.

The series finds its protagonist Sheila in a desperate situation. She’s married to a flop who doesn’t appreciate her, taking care of their child with no help, and she has given up any sense of a career to live this unsatisfying life. Sheila’s only tether to sanity is being able to get away from her life via exercise.

Physical would be unwatchable misery if it wasn’t for Byrne’s performance. Her Sheila is a mess that’s fraying at her edges. In Byrne’s hands, that jittery exterior gives way to a bellowing sadness and frustration not just at her life gone wrong, but also the state of the world around her — as she dwells on everything from ocean pollution to Reaganomics to, it seems, the end of disco. Somehow, in her sweat and metallic lycra, Byrne allows you to see the spark of hope that Sheila might just turn everything around.

The series ultimately becomes a portrait of a woman learning to live with her own demons by manifesting her own success, even if that success clashes against everything she believes in. In doing so, it shifts and challenges our own ideas about what it is — capitalism, self-obliteration, divorce — we’re rooting for. You may have to steel yourself, though, to stick with Physical until the second half of Sheila’s caustic journey.

Wow, I do not want Sheila’s life 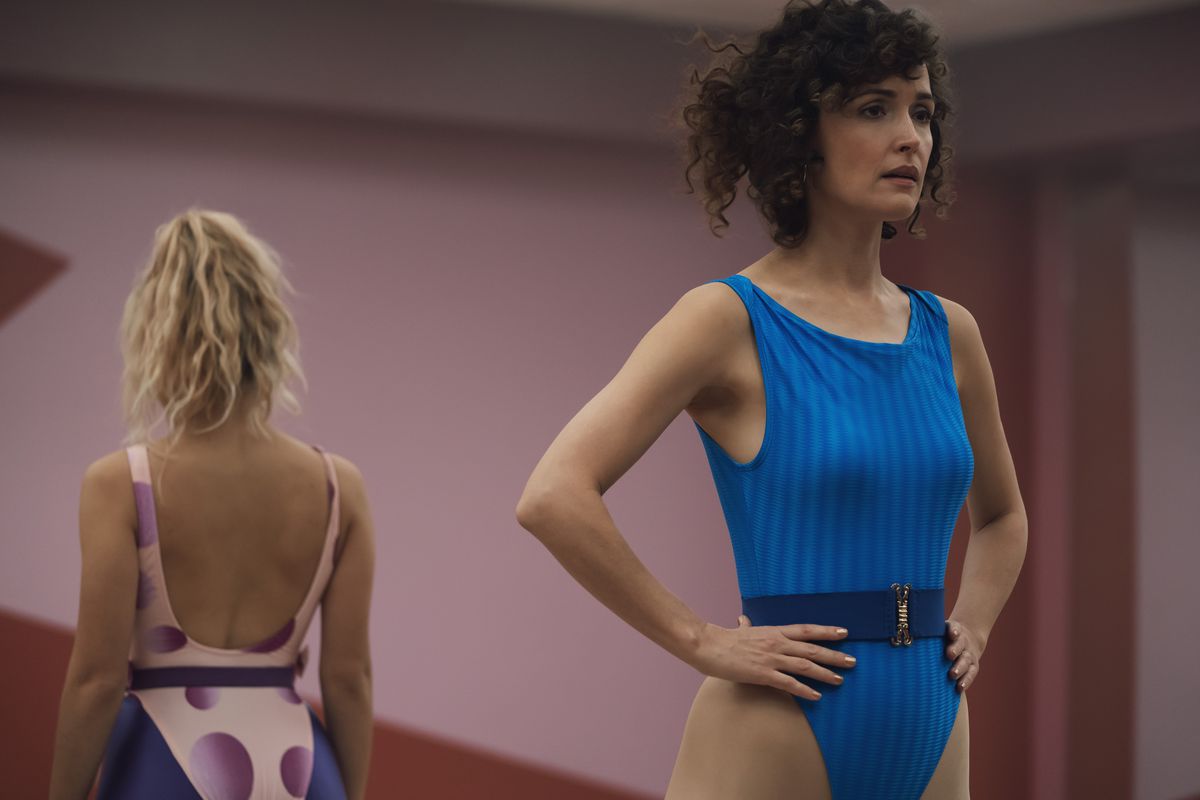 The most devastatingly effective takeaway from Physical is that it will never make you want to live in 1980s San Diego. Beneath the perpetual golden hour, Sheila Rubin is stuck in a desperate hell. Her husband, Danny (Rory Scovel), is a mediocre professor who has decided to pivot and make a bid for state assembly as a leftist upstart.

That goes about as well as his (failed) tenure attempt.

In her head, Sheila curses his mediocrity. But soon, she comes to realize that the only person sadder than the unexceptional professor turned unexceptional politician is the woman cooking his eggs, putting the kid to sleep, dealing with his deadbeat friends, and tending to his every beck and call. The series heavily features Byrne in voiceover, cruelly mocking the deficiencies — fatness, stupidity, weakness — of the humans around her, including Greta (Dierdre Friel), her earnest and only ally, before turning the acidic insults onto herself.

The punishment Sheila inflicts upon herself eventually becomes, yes, physical. Sheila’s dark secret is that she’s been using her and Danny’s joint savings, buying hamburger meals and then bingeing and purging the pain away one calorie at a time. Her knuckles have callused from how often she’s made herself throw up. From the very first episode, we learn that Sheila is incredibly and shockingly adept at hurting herself.

If you want to tap out, that’s understandable — especially if you’re sensitive to the heightened sound effects of a toilet flushing and a woman retching. Though Sheila’s disordered eating isn’t glamorized or depicted in a visually graphic way, it is a cornerstone to Physical, and viewers should be aware of this when deciding to watch the show.

To some extent, Physical’s corrosiveness can be explained by the show presenting itself as a taunt and a dare. Here’s a desperate, terrible woman, and boy is she unfathomably destructive.

But its overall unpleasantness is unintentional because it comes in large part from a lack of imagination. Making fun of someone doesn’t always need to be funny or inventive, but having Sheila repeatedly lurch back to the lowest common denominator by simply calling people fat or stupid derails Physical’s momentum. I get that the point is that this woman’s miserable life is entrenched in monotony and that she herself is trapped in a soul-numbing redundancy — but there are ways to get that point across without turning the show itself into something redundant.

Viewers who stick it out a little further will be rewarded with Sheila finding salvation in an aerobics class called “Body by Bunny.”

At “Body by Bunny,” which is located in a mall that will induce nostalgia in viewers of a certain age, Sheila’s life melts away and synth music drowns out her inner voice. She feels strong. Her face softens into a smile. Each kick and thrust brings crystal clarity into her consciousness, showing her that this is the way life should feel and the way it should be. Sheila’s smitten with this feeling. The show itself twists away from its finicky energy in its aerobics sequences to slow-motion fantasy shots and languid dreaminess.

It’s in these moments, where Byrne is looking at her aerobics instructor like someone witnessing a holy miracle, that Byrne unlocks her character’s full potential.

What’s frustrating is that there should be more than just moments for Byrne. On paper, Sheila feels like a character tailor-made for Byrne. The actress has shown she’s equally adept at playing hilariously mean villains in Spy and Bridesmaids, winsome momtagonists in Neighbors and Instant Family, and a calibrated cool Gloria Steinem in Mrs. America. Sheila’s in Byrne’s ballpark. But the writing on Physical doesn’t often match Byrne’s heroic performance, and the best parts of the show are wordless ones with Byrne digging into physical, aerobic comedy to carry it someplace better.

In hammering home Sheila’s unhappy existence, Weisman seems to want to answer why people like Sheila threw themselves at something ridiculous like aerobics and perhaps why people, specifically women, today throw themselves into fad exercise trends like SoulCycle, Peloton, and “The Class.”

Weisman provides a lot of answers, to a fault. For Sheila, aerobics becomes not only her hour-long respite from her life but also a possible meal ticket. If she can figure out a way to teach and record her workouts on tape, she could amass a home workout video fortune not unlike Jane Fonda. Physical spends a lot of time pinning aerobics to capitalism and how it would violate the leftist politics Sheila thinks she stands for.

If capitalism vis-à-vis aerobics is the only thing that can make Sheila feel alive, can it really be so bad? Looping in Sheila’s mediocre husband and all the deadening he represents, it becomes obvious to Sheila that capitalism and aerobics is the way to go. And so large parts of Physical become Sheila allegorically being seduced by — and then chasing — that forbidden fruit, which also involves a bizarre sexually tinged relationship with the conservative mall owner John Breem (Paul Sparks).

But I found the most riveting argument of Physical in the less splashy, less biblical, more effortless moment.

Sheila’s entire existence is built on a premise that her desires, small or large, shouldn’t even be considered. Her husband scoffs at the idea of making an effort, just one time, to comfort his own child back to sleep instead of leaving that responsibility to Sheila. He can’t imagine Sheila wanting to do something other than make him breakfast. He is so oblivious to her own existence, and so preoccupied with his own, that he can’t see her wasting away.

Bunny’s aerobics class is the antithesis of that, a place where desire isn’t shamed and Sheila’s existence is acknowledged, even encouraged. It’s the one place where Sheila feels like she comes first.

It’s not surprising that dismissing her devotion to the spectacle of exercise as ridiculous fails to convince Sheila it isn’t a worthwhile pursuit; from Sheila’s perspective, all of her desires have already been dismissed as ridiculous.

And to Sheila’s credit, aerobics is a lot less harmful and exponentially more legal than any urge she might have to shoot her husband.

What Physical whiffs on is building this idea in a bigger way. We understand why Sheila needs aerobics but not exactly why women are drawn to Sheila or what makes Sheila, out of presumably a world filled with Sheilas, the woman (and aerobics instructor) they need. It might be because they too lead lives of caged dread, keep self-destructive secrets, or harbor frustrations with their husbands. The audience is asked to connect the dots in a way that Physical takes for granted, and a lot like Sheila herself, it’s not hard to feel neglected at the end of it.

The first three episodes of Physical debut Friday, June 18, on AppleTV+. After that, one new episode will be released on the streaming service each week.