At UAW Local 2110, Maida Rosenstein has quietly organized the most prestigious group of cultural institutions on the East Coast.

June 28, 2021 Hamilton Nolan In These Times
Printer friendly
The Roots of Today's White Collar Union Wave Are Deeper Than You Think Published June 28, 2021 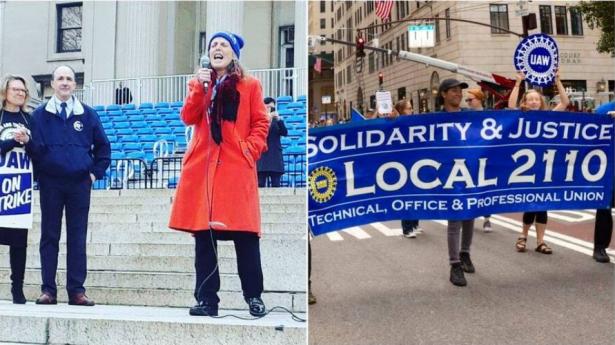 Photos via Maida Rosenstein/ Local 2110 // In These Times,

Before the recent wave of organizing among media workers, adjunct professors and nonprofit workers set the world talking about the promise of white collar unions, there had already been decades of quiet organizing among the white collar creative underclass. A surprising amount of that organizing has been done by a single local union: UAW Local 2110 in New York City, which with little fanfare helped to pioneer the sort of unionizing that routinely draws headlines today.

Beginning in the 1980s, the union organized workers at a list of cultural institutions including the Museum of Modern Art, the Village Voice and HarperCollins Publishers. More recently, Local 2110 has been organizing the museum and culture industry at a furious pace, at places like the Brooklyn Academy of Music, the New York City Tenement Museum and the Children’s Museum of the Arts. In just the past year, the union has added the Portland Museum of Art, the Boston Museum of Fine Arts, the Whitney Museum, the Brooklyn Museum and Film at Lincoln Center, among others. (They also found time to help lead a strike against a pricey private school.)

Local 2110 is led by Maida Rosenstein, who joined after leading a campaign to unionize administrative staffers at Columbia University in the 1980s. She has spent more than three decades assembling what may be the most prestigious collection of cultural institutions in America in a single union local, all with a resolutely anti-elite organizing model of keeping the door open to everyone. In an interview, Rosenstein offered the long view on the white collar union trend that continues in earnest to this day.

On the reason the UAW doesn’t just organize autoworkers:

“UAW calls itself an industrial union, and they’ve long had a view of trying to organize companies broadly. There were always a certain amount of office workers, even in the Chrysler plant or whatever. When District 65 [the union she originally joined] affiliated with the UAW, they affiliated more on the ground of progressive politics than anything else. Walter Reuther took the UAW out of the AFL-CIO during the Vietnam War era. That was really where the affiliation came from. We in District 65 actually brought in a lot of the white collar organizing.”

On the recent popularity of unions:

“I do think there’s a generational thing. The millennial generation is a lot more pro-union than my generation was. At least in the blue cities, it seems like there was a wave of people who after Bernie Sanders, and after Trump was elected, embraced the idea of organizing. People went from Occupy Wall Street, where everybody was doing their own thing, to saying ​‘We have to get organized politically.’ I feel like that did carry over — unions made [sense to] a lot of people when they thought about their disgruntlement at work. The millennial generation have been so much more open towards it.”

On unionizing the museum industry:

“In museums, there have been these big shifts, with the expansion of the number of employees, and a lot of money flowing in as they’re very involved in land expansion projects, etc. They have these very corporate boards and much more highly paid leadership, and then they bring in a ton of younger, educated people and pay them really low wages. Most of them are working there for idealistic reasons, and in large numbers.

“I thought the pandemic would put a stop to that, would kill our organizing. And it didn’t. In some ways it made it easier. Museums and all these institutions were shut down, and a lot of people were furloughed or laid off. Their institution betrayed them. A lot of people saw that and felt they had no recourse, and it was very disappointing. They wanted to do something about it. Also, we found a way of organizing virtually, too. There were certain things about it that made it more accessible. All these people got on these Zoom meetings, because really they had nothing to do. They were home, they were upset and they were isolated. This was something to really make a difference. And it really took hold.

“The pay issue is a really big one. Especially in larger institutions, they have these trustees who are just like dripping with money. Museum leadership is starting to be like university presidents, where it’s very obviously out of whack, and you have people who are paid really poorly. Museums are absolutely terrible at having large numbers of staff being very precarious, like the front line staff who do visitor services and the store. A lot of them are part time, some of them are seasonal. They get paid like minimum wage or a little above. In almost every museum it’s like that. Very few of them have full time jobs. And even the more skilled positions — art handlers, museum educators — those have been converted into per diem positions, on-call positions, intermittent work. They basically work the way a freelancer would work.

“Even the people who are in the full time professional positions are paid very low. You know this from journalism: You’re a writer, and now you’ve been busted down and people are making like $50,000 a year. And that’s what happened in museums: You’re a curator and you’re making $50,000 or $60,000 and living in Boston, New York or Portland. It’s not very much money.”

On why the publishing industry has been slower to unionize:

“You have corporations that are gobbling each other up. It’s like unbridled capitalism, and it’s very, very difficult. They can move, merge, subcontract, do all these things with no control. Nonprofits can do a lot — universities like Columbia are notoriously anti-union, and they do a lot of bad things — but museums and universities so far haven’t been able to move some place. They can’t really pick up and leave. We’re still doing better in the nonprofit sector than we are in the for-profit sectors.”

On the Village Voice, a media union pioneer:

“The union at the Voice was amazing when I first met people there. At that point the newsroom was like 175 people or 200 people. It was very, very vibrant. They really ran the paper, they had so much control.”

On craft unions vs. industrial unions:

“The arts unions, the craft unions, they have done a phenomenal job for their members, but they are very focused and deeply wedded to their occupations. I think administrative staff, for instance, have really been overlooked in a lot of these institutions. We were appealing to them in a lot of ways. In the museums they are [wall to wall unions that include everyone], but not all of them. We can’t always get wall to wall.

“No one is organizing museums in a [systematic] way — no one has targeted this and said, ​‘This is a strategic target, we’re doing all this research.’ We’re a local union. We have opportunities to organize, we’re taking it. We’re just trying to push the envelope forward where we’re able to.”

On the difference between the 1980s and today:

“When I was organizing, it was like, ​‘A union, in an office? What are you, kidding? That’s very blue collar.’ People said ​‘I don’t want to wear a uniform, I don’t want to punch a time clock.’ At Columbia, they did a full out anti-union campaign. They told us, ​‘With a union you’ll have to go to meetings downtown. The union will come between a secretary and her boss.’ It was really also sexist and elitist. It was hard. They ran an anti-union campaign, and we won our election at Columbia by eight votes out of 1,100 people. It was a total squeaker. People were terrified.

“One thing I’m noticing is that the anti-union campaigns [now] seem less effective. And there’s been more exposure. No one had ever heard of an anti-union campaign. It was like a secret that bosses did this. And now it’s out there. Everybody knows about Walmart, or Amazon or Delta. The fact that there was actual press on that stuff is amazing to me!”