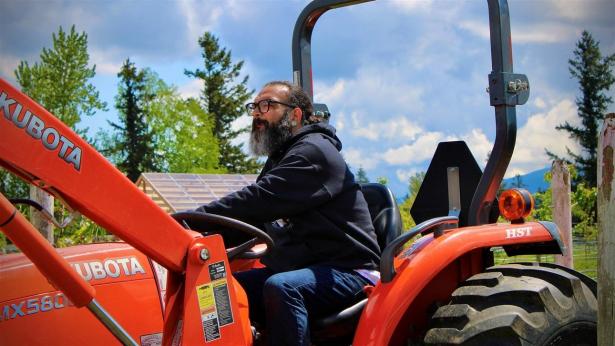 Oregon state Rep. Ricki Ruiz grew up the son of two farmworkers, and he remembers his family’s struggles vividly.

“We almost faced eviction five times because we didn't have enough money for rent,” said Ruiz, a first-term Democrat. “We didn't go to the grocery store; we went to the food bank. We didn’t have extra clothes.”

Ruiz hopes to change that situation for farmworkers in Oregon. He sponsored a bill that will mandate that farmworkers be paid overtime for any work beyond 40 hours a week.

“If this legislation was passed when I was a kid, we would have had less stress in our family and my parents wouldn't have had to work 80 hours a week,” he said. “This will be life-changing for farmworkers. They will be able to make a living wage and support their families.”

The effort in Oregon follows bills passed earlier this year in Washington and Colorado to grant overtime pay to farmworkers. Lawmakers in Maine are considering a similar measure.

Currently, federal and most state laws exempt farmworkers from the overtime protections guaranteed to most other workers. Labor advocates say that precedent was set by the Fair Labor Standards Act in 1938, which was written to exclude Black field workers in order to win the support of Southern Democrats. Today, 83% of the nation’s farmworkers are Hispanic, according to the U.S. Department of Labor’s National Agricultural Workers Survey.

“The exclusion of farmworkers was rooted in racism and made possible by the feeling that it wasn't necessary to protect African Americans,” said Bruce Goldstein, president of Farmworker Justice, a Washington, D.C.-based advocacy and support group. “It's hard to believe that the exclusions of farmworkers from overtime pay and labor rights would continue if the majority of farmworkers were Caucasian.”

Nearly half of all U.S. farmworkers lack legal status, according to the U.S. Department of Agriculture. Just more than a quarter of farmworkers are U.S.-born, according to the agency's numbers. The Economic Policy Institute, a left-leaning research think tank based in Washington, D.C., estimates about 10% are foreign workers in the United States on H-2A temporary visas. The average farm wage was $13.99 an hour as of 2019, roughly 60% of the average non-farm wage.

Some lawmakers interviewed by Stateline said the overtime bills they sponsored would apply to workers on H-2A visas, while others said theirs would not. The disparate rules in federal and state laws show the need for federal action, farmworker activists say. Some lawmakers also have proposed whistleblower protections because undocumented workers are unlikely to report wage theft if they fear retaliation.

Edgar Franks, a labor leader who picks raspberries and blueberries in Washington state, said overtime protections would not only boost wages, but also would keep families together.

“A lot of us grew up with our parents at work all day and our older family members taking care of us,” said Franks, political director for Familias Unidas por la Justicia, a farmworker union.

Last year brought renewed attention to racial justice and the frontline workers who face health risks in order to provide essential services. In several states, that spotlight led to the recognition of the plight of farmworkers, who advocates say are among the most vulnerable groups in the country. Lawmakers’ push to end inequities in overtime law has drawn support from President Joe Biden. But they’re up against the politically powerful agriculture industry, which asserts that new wage requirements would devastate farmers.

“Incremental change for farmworkers, who are the most devalued human lives in our country, has always been an uphill battle,” said Elizabeth Strater, director of strategic campaigns with United Farm Workers, the labor union founded by Cesar Chavez and other organizers. “But no industry should feel entitled to use up a human body at a rate it's not meant to endure.”

Agriculture industry groups say that farmers operate on thin margins, and they compete against other states and countries that grow the same products with less labor costs. They also note that farm work is seasonal, and requires immense amounts of work during harvest and planting times, which they believe is grounds for the longstanding farm work overtime exemption.

“Overtime requirements, especially a blanket, standardized mandate when there is nothing standard about farm work, would make it increasingly difficult for farmers to remain competitive, leading to small farms going out of business,” wrote Allison Crittenden, congressional relations director at the American Farm Bureau Federation, in a statement provided after a Stateline request for an interview.

Earlier this year, Washington state lawmakers passed a bill that will grant farmworkers time-and-a-half overtime pay, phasing in a 40-hour threshold by 2024. The new law was a response to a state Supreme Court ruling in 2020 that required dairy workers to be paid overtime.

“The deep-seated bias in agriculture is that labor needs to be as close to slavery as you can get it,” said Rosalinda Guillen, an activist with Community to Community Development, a Washington-based organization that focuses on food sovereignty and immigrant rights issues. “The court recognized the racist structure of the agriculture industry.”

Agribusiness groups expected the court to rule similarly for other farmworkers, and they feared farmers would be required to pay workers retroactively for overtime worked in years past. The result was a bill that established overtime pay while protecting farmers from retroactive claims. It was a long-awaited win for farmworkers and progressive activists, supported—albeit begrudgingly—by the agriculture industry and its Republican allies.

“Knowing that the court was very likely to impose this on us, we were open to a discussion on this being legislatively applied, as long as it was not done overnight,” said Jon DeVaney, president of the Washington State Tree Fruit Association.

Washington state Sen. Curtis King, the Republican who sponsored the overtime bill, said he did so to protect farm owners from retroactive payments, though he disagreed that the previous state law, passed in 1959, was evidence of systemic racism.

Despite sponsoring the bill, King still fears the overtime requirement could make it difficult for Washington farmers to compete with producers from other states or overseas.

“We can sit here all day long and say the going wage ought to be such and such for farmworkers,” he said. “You go try and pay it and stay in business and see what happens.”

At present, only six states—California, Hawaii, Maryland, New York, Minnesota and now Washington—offer any overtime coverage for farmworkers. Some of those states offer overtime only after 60 hours; California will phase in a 40-hour threshold by 2022.

Even though Washington’s law was forced by a court decision, farmworker advocates say it has renewed momentum for efforts in other states. Earlier this week, Colorado lawmakers passed the Farmworker Bill of Rights, which will give minimum wage and overtime rights to the state’s farmworkers. The measure also will allow workers to join labor unions, mandate rest and eating breaks, and offer whistleblower protections to workers who report unsafe conditions.

“The rights this bill will restore to these workers are rights that are enjoyed by almost every other worker in the state,” said Colorado state Sen. Jessie Danielson, the Democrat who sponsored the bill.

Colorado Gov. Jared Polis, a Democrat, has indicated he will sign the bill.

In Oregon, Ruiz’s bill is still in committee, but he’s hopeful it will advance this session, aligning the state’s policy with neighboring West Coast states.

“There's a majority of people of color working in the fields, and they're the ones being excluded from these resources,” Ruiz said. “I believe folks are going to appreciate that this region is honoring farmworkers. It will attract more workers and keep current workers.”

Ag industry groups disagree. They say agribusinesses won’t be able to afford the extra wages, and the law will cause them to limit hours, split shifts and increase mechanization—forcing farmworkers to take on multiple jobs just to make the same money as before.

“We heard from hundreds of farmers saying they would not be able to afford the bill as it was proposed, and ultimately it would result in a tremendous amount of job loss and wage reduction,” said Samantha Bayer, policy counsel with the Oregon Farm Bureau, which opposes the bill. “It’s a false promise that this would result in more wages.”

Farm groups across the country have made similar predictions about overtime proposals in different states. Labor advocates view them as a threat to punish farmworkers.

“‘The food system will be destroyed, the agriculture industry will be destroyed’—they say that about every single benefit that is given to farmworkers,” said Guillen, the Washington activist. “They have essentially said that if they have to pay farmworkers overtime, they’ll cut their hours and pay them less. That is insidious racially biased behavior.”

Maine state Rep. Thom Harnett, a Democrat who has sponsored his own farmworker overtime bill, acknowledged that farming is a challenging industry.

“There's a great deal of empathy for that industry, and I share that,” he said. “I just don't share putting it on the backs of the workers to be the ones who suffer the most. Because of these exceptions, we have farmworkers who have been stuck in poverty for generation after generation.”

Farming groups say that overtime doesn’t make sense in an industry that requires immense amounts of work during seasonal periods such as planting and harvest time. To account for this, Hawaii’s law, for example, has a seasonality clause, which raises overtime thresholds during certain periods of the year. Farmers in Washington sought unsuccessfully to include a similar provision in their state’s bill.

“In agriculture, there are seasonal activities where you can safely work more for short bursts of activity,” said DeVaney, the fruit tree farming advocate. “There are periods of the year where we have longer hours worked, and the work is by nature physically demanding.”

Harnett noted that many itinerant farmworkers don’t get a reprieve from those cycles. Some laborers travel among states to find work in different regional growing seasons, often living in employer-provided housing.

“We hear that farming is a unique business, because there's this intense period of planting and harvest,” he said. “For the farmworker, their life is that intense period over and over again.”

Harnett’s bill has passed through a House committee but has not yet received a vote before the full House.

“For too long—and owing in large part to unconscionable race-based exclusions put in place generations ago—farmworkers have been denied some of the most fundamental rights that workers in almost every other sector have long enjoyed,” Biden said.

U.S. Rep. Raul Grijalva, an Arizona Democrat who has been a leading voice on the issue, reintroduced the Fairness for Farm Workers Act last month, which would end federal overtime and minimum wage exemptions for farmworkers, although it would not apply to those on H-2A visas. The bill is included in the Biden administration’s immigration plan.

Alex Brown covers environmental issues for Stateline. Prior to joining Pew, Brown wrote for The Chronicle in Lewis County, Washington state. He’s won awards for investigative reporting and feature writing from the Pacific Northwest Newspaper Association. In 2017, Brown thru-hiked the 2,650-mile Pacific Crest Trail, which traverses mountain ranges from the Mexican border to the Canadian border. He previously was a congressional correspondent for National Journal, where he covered energy and environment, technology and campaigns. Brown graduated from Union University and is a native of Michigan.

Stateline provides daily reporting and analysis on trends in state policy. Since its founding in 1998, Stateline has maintained a commitment to the highest standards of nonpartisanship, objectivity, and integrity. Its team of veteran journalists combines original reporting with a roundup of the latest news from sources around the country.

Sign up for email newsletters from The Pew Charitable Trusts. You'll get our latest findings and recommendations—plus opportunities to advocate for the issues you care about.