There Are No Mass Migrations Without U.S. Meddling and Militarism

Despite its pledges to aid Central America, the Biden administration continues to deny the United States’ role in destabilizing the region.

July 8, 2021 Azadeh Shahshahani and Rhonda Ramiro In These Times
Printer friendly
There Are No Mass Migrations Without U.S. Meddling and Militarism Published July 8, 2021 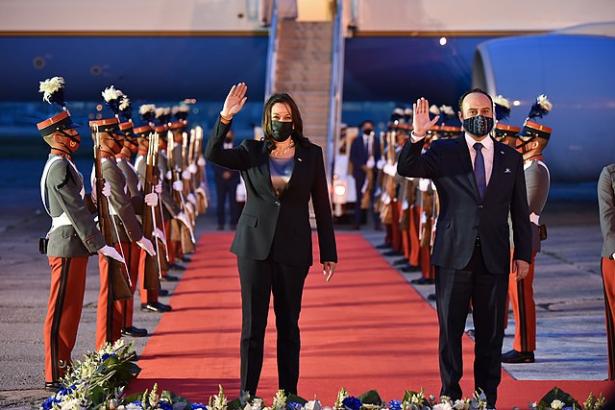 When Vice President Kamala Harris visited the U.S.-Mexico border in El Paso, Texas, on June 25, she repeated the claim she made during her trip to Guatemala and Mexico earlier that month: The Biden administration is serious about addressing the root causes of Central American migration.

Toward this end, the administration has set forth a four-year, $4 billion proposal to increase assistance to El Salvador, Guatemala and Honduras, ​“conditioned on their ability to reduce the endemic corruption, violence, and poverty that causes people to flee their home countries.” President Joe Biden also issued an executive order that identifies the principal culprits for this present state of affairs as ​“criminal gangs,” ​“trafficking networks,” ​“gender-based and domestic violence,” and ​“economic insecurity and inequality.”

Perhaps unsurprisingly, Biden appears to be following the footsteps of past administrations by denying the role that decades of U.S. interventionism and militarization have played in destabilizing the region. What’s worse, officials like Harris continue to order migrants to stop coming to the United States — even as the United States exacerbates the very crises that encourage migration in the first place.

A history of white supremacy and interventionism

Since the early 1900s, the United States has trained and employed law enforcement officers to patrol the U.S.-Mexico border, providing them with virtually unlimited discretion to keep non-white people out of the country. U.S. Border Patrol is itself rooted in white supremacy: At the time of its founding in 1924, many of its members belonged either to the Ku Klux Klan or the Texas Rangers, which was tantamount to a racist paramilitary force. In addition to beating and humiliating migrants, patrols shot, hung and disappeared people who they believed had crossed into the United States outside official ports of entry. Confident in their impunity, border patrollers often tortured migrants into confessions whether they had entered the country lawfully or not.

Even after transferring Border Patrol from the Department of Labor to the Department of Justice, the U.S. government continued to pass laws that effectively criminalized migration while increasing the agency’s powers. The Hart-Celler Act of 1965 established immigration quotas from Mexico and other Latin American countries. Twenty-nine years later, under President Bill Clinton, U.S. Border Patrol implemented a ​“prevention through deterrence” immigration policy that funnels migrants into mortally dangerous terrain by closing off more common points of entry. The policy remains in effect today.

While brutally guarding its Southern border, the United States has spent billions of dollars training Latin American security forces in torture, extortion, blackmail and extraordinary rendition. Formerly known as the School of the Americas, the Western Hemisphere Institute for Security Cooperation (WHINESEC) has ​“educated” over 80,000 officers in more than a dozen countries, in addition to Border Patrol and Immigration and Customs Enforcement (ICE) officials. WHINESEC graduates are responsible for countless acts of abuse, murders and disappearances outside of the United States.

The United States has used WHINESEC-trained security forces and other government resources to destabilize left-wing governments in Latin America. In the 1950s, at the height of the Cold War, the CIA backed a coup to overthrow the democratically elected president of Guatemala, Jacobo Árbenz. The Eisenhower administration depicted Guatemala as a pawn of the Soviet Union; in reality, Arbenz’s proposed land reform threatened U.S. business interests, including the United Fruit Company.

The United States also played a key role in El Salvador’s civil war from 1980 to 1992, supplying the Salvadoran junta with $1 million each day to quash the left-wing Farabundo Martí National Liberation Front. During that time, the Reagan administration, working alongside the International Monetary Fund and the World Bank, began imposing trade policies on Central American countries that benefited large, multinational corporations at the expense of local people.

In 1999, the United States adopted Plan Colombia, allocating more than $8 billion to arm and train Colombia’s military and police in a so-called war on drugs. The plan, which has targeted narco-traffickers and left-wing guerrillas alike, has forcibly displaced nearly 6 million Colombians and killed thousands more.

These policies at home and abroad have not only generated mass human suffering but waves of forced migration to the United States. The number of Honduran children crossing the border increased by more than 1,000% in 2014, for example, within five years of the Obama administration aiding a coup against Honduras’ democratically elected president, Manuel Zelaya.

As another example, immigration from Mexico has doubled since the United States signed the North American Free Trade Agreement in 1994, which undercut small business, crushed low-income workers and made migration a matter of survival. School of the Americas Watch, a human rights organization that has long called for the closure of WHINESEC, notes that, ​“by the 1980s, migration from the South was not for obtaining employment” but was fueled instead by the immediate need to flee the ​“conditions created by U.S. foreign policy and intervention.”

The foundation of Biden’s platform

So far, the Biden administration appears committed to business as usual when it comes to the Southern border and foreign policy in the Americas. Biden’s proposed U.S. Citizenship Act of 2021 reflects two long-standing priorities of past immigration bills. First, it floods Central American countries with money to beef up local military and police forces as a means of promoting ​“the rule of law, security, and economic development.” Second, it effectively ​“outsources” U.S. border control by funding Mexico to militarize its own Southern border states, which also works to extend U.S. authority over movement in the broader region.

The United States pursued similar strategies with the Mérida Initiative (2007) and the Southern Border Program (aka Programa Frontera Sur, 2014). Modeled after Plan Colombia and initiated by President George W. Bush and Mexico’s President Felipe Calderón, the Mérida Initiative sought to limit drug trafficking and organized crime by providing Mexico with billions of dollars for military equipment, training and infrastructure. The Initiative also increased security along new ​“21st-century borders” that are not contiguous with the United States. As of 2013, the U.S. government had financed a dozen advanced military bases and a hundred miles of security partitions along the borders separating Mexico from Belize and Guatemala, respectively.

With Programa Frontera Sur, the Obama administration doubled down, funneling millions more in aid and law enforcement resources to the Mexican government. This time, U.S. assistance included such equipment as high-tech observation towers along the Mexico-Guatemala border, as well as intensive training for local Mexican police and immigration officers.

Many of the countries to which the United States has supplied security aid have embraced this kind of militarization. In the early aughts, the governments of Mexico, Guatemala, El Salvador and Honduras each placed soldiers on the streets in an effort to crack down on drug trafficking. Yet, in the years since the Mérida Initiative and Programa Frontera Sur took effect, homicide rates and drug-related violence in these countries have only increased.

Biden again demonstrated his commitment to a failed immigration policy in January when nearly 8,000 Hondurans arrived at the Honduras-Guatemala border seeking refuge from the wreckage of two major hurricanes, the devastating effects of Covid-19 and the extreme violence that has swept Honduras since the U.S.-backed coup of 2009. Unwilling to break with precedent, the Biden administration stood by as 2,000 Guatemalan police officers and soldiers, armed and trained by the United States, fought the migrants back with tear gas and batons. Multiple administration officials would later praise the Guatemalan government for its response.

Steps towards a more just and humane immigration policy

On January 15, days before Biden assumed office, more than 70 human rights organizations published a joint letter urging the incoming administration to make substantive changes to U.S. policy in Central America. Echoing many of the demands that advocates and organizers have made for decades, the letter called on the federal government to end security assistance, training, and weapons sales to the region; increase transparency about where U.S. aid is directed and how it is used; halt all economic sanctions against Central American countries; and drastically limit U.S. involvement in their domestic politics.

Money towards further militarization will only intensity the suffering in Central America. If the Biden administration is truly committed to addressing the root cause of forced migration, it must first acknowledge the destructive force of U.S. interventionism, imperialism and white supremacy. Only then can the administration offer anything approaching a just remedy.

The authors would like to thank law students Aashna Rao and Camelia Metwally for their research support for this article.

[AZADEH SHAHSHAHANI is legal and advocacy director at Project South and past president of the National Lawyers Guild. She tweets @ashahshahani.

RHONDA RAMIRO is the chair of BAYAN-USA and leads the global secretariat of the Resist US-Led War Movement.]