This book, the second on Trump written by this pair of Pulitzer Prize-winning reporters, "pulls back the curtain on the handling of Covid-19, the re-election bid and its chaotic and violent aftermath." 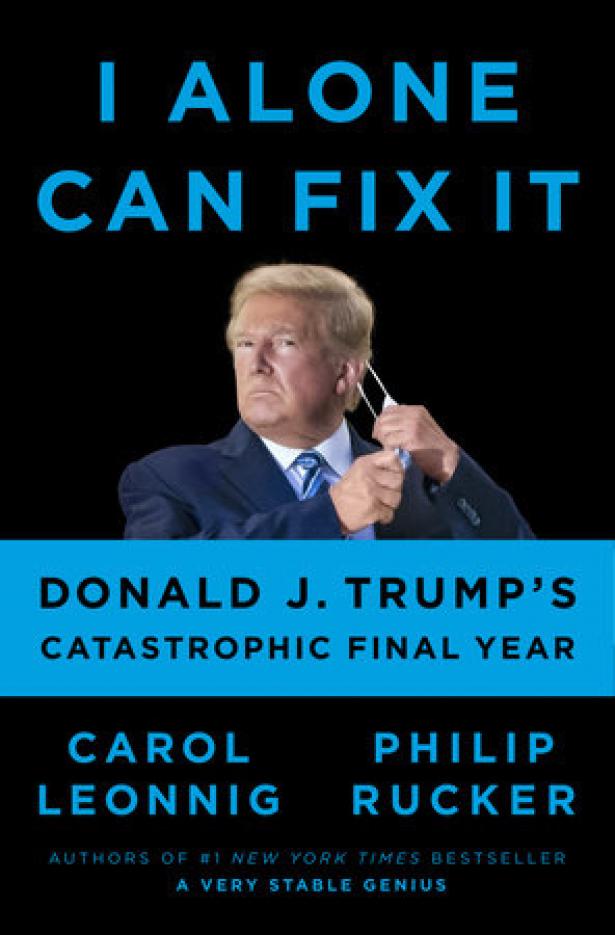 Gen Mark Milley saw that the US was in a ‘Reichstag moment’ – four days before the Capitol riot. With this and much more startling reporting, Carol Leonnig and Philip Rucker of the Washington Post deliver the goods once again

"Personally, what I wanted is what they wanted,” he tells Carol Leonnig and Philip Rucker of the Washington Post.

Five people died after a mob of Trump supporters stormed the Capitol on 6 January, seeking to overturn the election.

Last week, Trump declared: “These were peaceful people, these were great people.”

So much for blaming Antifa. Think Charlottesville redux, on a larger stage. Or something even more ominous.

In their second book on the Trump presidency, Leonnig and Rucker report that on 2 January 2021, two months after election day and as Trump still refused to concede defeat, Gen Mark Milley, chairman of the joint chiefs of staff, told aides: “This is a Reichstag moment.”

He was referring to the fire at the German parliament on 27 February 1933, an incident seized as a pretext by Hitler to begin arresting opponents and to consolidate his power.

“The gospel of the Führer,” the authors quote Milley as saying.

According to the general, the US under Trump was experiencing its own version of the late Weimar Republic, complete with modern-day “Brownshirts”. A graduate of Princeton and Columbia, Milley was not alone in seeing shadows of the past slither into the daylight.

Trump, Leonnig and Rucker quote a senior official as saying, is a “guy who takes fuel, throws it on the fire, and makes you scared shitless”, then says “‘I will protect you.’

“That’s what Hitler did to consolidate power in 1933.”

This is a blockbuster follow-up to A Very Stable Genius, in which Leonnig and Rucker chronicled the chaos of Trump’s first three years in office. I Alone Can Fix It pulls back the curtain on the handling of Covid-19, the re-election bid and its chaotic and violent aftermath.

The pair are Pulitzer winners, for investigative reporting. Their book is essential reading. They have receipts, which they lay out for all to see.

Of Covid, they capture Marc Short, Vice-President Mike Pence’s chief of staff, telling folks in February 2020: “It’s not that bad.” The families of more than 600,000 dead Americans would probably disagree. (Short later contracted the virus.)

Feeling burned by the authors’ first book, this time Trump sat for a two-and-a-half-hour interview. At the end of it, he let it be known – with a “twinkle in his eye” – that “for some sick reason” he “enjoyed it”.

Much as he claims to hate the media and the elite, Trump craves their attention. Much as he believes in his own power of persuasion, Leonnig and Rucker were not converted.

Trump’s hubris shines through. But for the pandemic, he claims re-election was inevitable. It’s a salesman’s pitch but one sufficiently rooted in reality. He also claims America’s two greatest presidents could not have defeated him. That is just surreal:

I think it would be hard if George Washington came back from the dead and he chose Abraham Lincoln as his vice-president, I think it would have been very hard for them to beat me.”

Before Covid, the economy was humming. Trump had taken down Qassem Suleimani, a top general in Iran’s Quds force, and the public approved.

On the relationship between Covid and Trump’s defeat, Leonnig and Rucker describe Benjamin Netanyahu, Israel’s now former prime minister, sharing his thoughts with Tony Fabrizio, a pollster who worked for him and Trump, in early 2020.

Netanyahu said: “The only thing that can beat President Trump is coronavirus.”

With analytic capacity Trump could never muster and a sense of history he lacked, Netanyahu added: “If you don’t understand what a pandemic is and the mathematics behind how this will spread if we don’t contain it, it will collapse economies, and that changes the ball game tremendously.”

The book’s rawest revelations concern 6 January. At best, Trump was blasé about Mike Pence’s plight, presiding over confirmation of Biden’s win, stuck inside the Capitol as halls and offices were plundered. Like Nero watching Rome burn, Trump fiddled in front of his TV.

As for the rioters, Trump now claims he and they are one: “They showed up just to show support because I happen to believe the election was rigged at a level like nothing has ever been rigged before.”

On 6 January, James Lankford of Oklahoma argued against certification, citing constituents’ concerns about voter fraud. He failed to mention it was Trump who spread that very concern.

Hours later, however, the senator voted to certify. Months earlier, Tulsa was the venue for Trump’s infamous comeback rally, a flop which cost Brad Parscale his job as campaign manager and Herman Cain his life.

Liz Cheney also makes a telling appearance in Rucker and Leonnig’s story. In a 7 January call with Gen Milley, the Wyoming congresswoman unloaded on Jim Jordan, a hard-right Ohio representative and Trump favorite, as a “son of a bitch”.

Stuck with Jordan during the Capitol siege, Cheney discounted his expressions of concern, saying: “Get away from me. You fucking did this.” Cheney is now a member of the House select committee charged with investigating the riot.

Leonnig and Rucker also quote Doris Kearns Goodwin: “There is nothing like this other than the 1850s, when events led inevitably to the civil war.”

Politicians and acolytes make pilgrimages to Mar-a-Lago, Trump’s mecca in Palm Beach. Each dusk, Leonnig and Rucker write, he receives a standing ovation.

Just the way he likes it.

An attorney in New York, Lloyd Green was opposition research counsel to George HW Bush’s 1988 campaign and served in the Department of Justice from 1990 to 1992.