labor McDonald’s and the Failed Promise of Black Capitalism 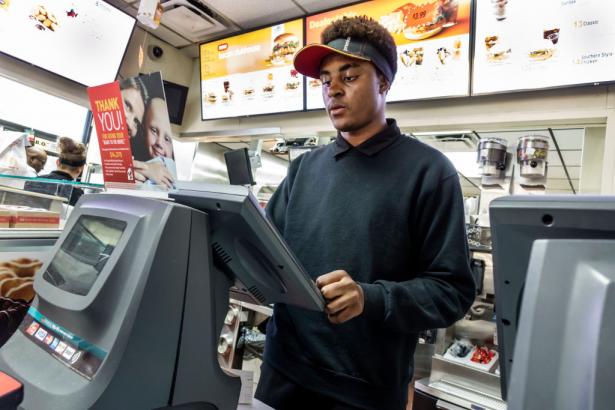 Review of Franchise: The Golden Arches in Black America by Marcia Chatelain (Livewright, 2020)

As Darnella Frazier’s video of George Floyd’s murder by Minneapolis police officer Derek Chauvin circulated, hundreds of thousands of protesters demanding an end to racist state violence flooded the streets in cities all across the US. They were met with violent, retaliatory cops tear gassing and shooting them with “rubber” bullets. For the first time in a mass protest against police brutality, corporations from Starbucks to BlackRock released statements supporting “Black Lives Matter,” pledging to promote racial equity. Local businesses posted signs in their windows reading “black-owned” and “buy black,” protecting themselves from the fray in a symbolic gesture of support with protesters. Meanwhile protesters in Minneapolis burned down a police precinct and the Wendy’s where another black man, Rayshard Brooks, was killed by a police officer, and they occupied city squares all across the country.

After the summer of uprisings waned into fall and the Coronavirus pandemic continued ravaging poor and working-class communities, slogans such as “buy black” and diversity trainings held at JPMorgan Chase served as a reminder that superficial market solutions have long been recommended by capital and the state in response to demands  for wide-ranging, structural change in society — while those same forces have simultaneously disinvested in the social welfare of these communities.

Historian Marcia Chatelain writes about the co-optation of black radical protest against state violence and economic disenfranchisement into the “struggle for silver rights,” defined by inclusion of black people in the institutions of the free market, in Franchise: The Golden Arches in Black America. This wildly entertaining and instructive book covers four decades of the civil rights movement — beginning in the late 1960s, when black protest was militant, anti-capitalist, and frequent, to the early 1990s, when, in the absence of meaningful state investment, the movement had been trampled by a violent, reactionary government and the logic of black capitalism.

At the center of Franchise’s engrossing storytelling is the history of McDonald’s, one of the first fast food franchises to open its doors to black franchisees. As Chatelain tells it, McDonald’s has long been the site of civil rights protest, black capitalist opportunity, and economic uplift in black America. If the “constrained choices” of poor and working-class black neighborhoods are shaped by racism and government disinvestment in social welfare, then McDonald’s has portrayed itself as a beacon of potential in black communities.

The chain offers cheap, easy, and arguably delicious food, as well as low-wage jobs and the prospect of black ownership. The rise of McDonald’s in black America is in large part because of shrewd marketing and the high profits that black consumers bring to this corporation. By the 1970s, “black stores” were grossing 25 percent more than “white stores.”

Chatelain marks Martin Luther King’s murder as catalyzing a shift from the militant civil rights movement demanding an end to racist state violence to the campaign for black business. King, a staunch anticapitalist leading a movement guided by the needs of the poor, was murdered in 1968 a day after defending the sanitation workers’ strike in Memphis, igniting weeks of violent uprisings all over the country. The black rebellion referred to as the “Holy Week Uprising” led to an exodus of white-owned businesses in black communities already gutted of decent housing options, access to good schools, healthy food options, and employment opportunities.

The federal government soon attempted to extinguish the fires of protest. President Lyndon B. Johnson’s administration proposed more black-owned businesses as a solution to dispossession and blight; his successor Richard Nixon perfected this plan: “President Nixon, who preferred racial dog whistles and oversaw the covert destruction of the Black Power organizations, was black capitalism’s goodwill ambassador and benefactor … promot[ing] legislation that provided business loans, economic development grants, and affirmative action provisions on federally contracted projects as a means of suppressing black rage and securing black endorsement.” McDonald’s benefited from this opportunity, opening its doors to black franchisees in inner cities as other businesses fled post-uprisings. 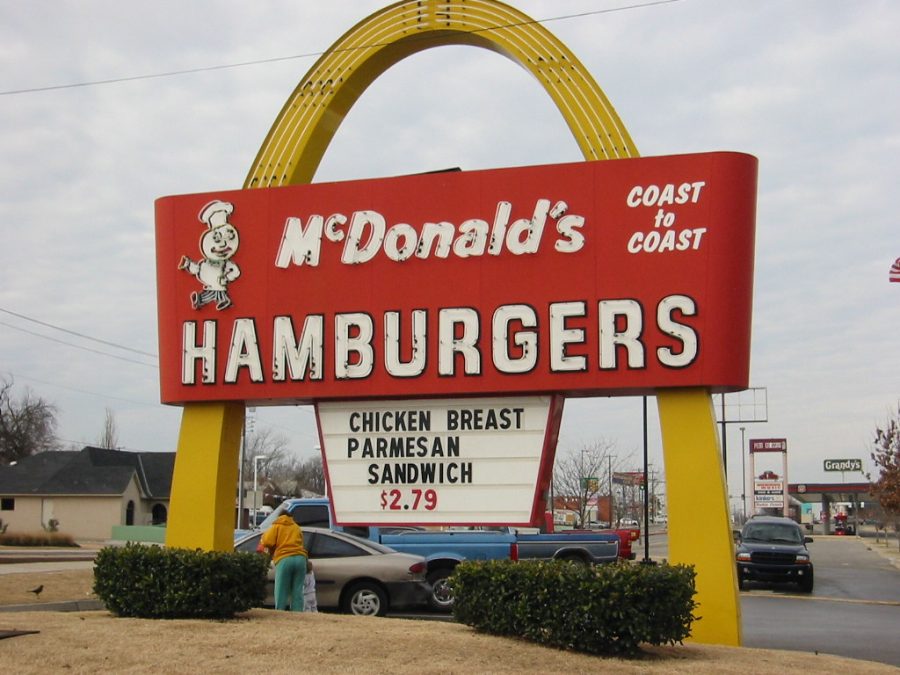 But the company’s expansion in black communities did not come without a cost. Franchising for black owners consisted of higher overhead costs, higher insurance costs, and higher crime than white franchisees in the suburbs. Often black franchisees had to depend on white investors with capital and dealt with racial discrimination from the parent company.

Still, hucksters and honest, hard-working African Americans alike were drawn to the economic possibilities that franchising promised. Former Student Nonviolent Coordinating Committee member and Georgia state legislator Julian Bond tried to franchise a Dairy Queen but failed. Serial entrepreneur La-Van Hawkins, a franchisee mogul of Burger King and other chains and founder of the La-Van Hawkins Inner City Foods company, would swindle his way into investment capital to extract from the black poor, not paying his black employees and not paying off his debts before eventually being arrested for fraud.

Chatelain argues that civil rights leaders and black nationalists saw opportunity in McDonald’s during eras of both legal and de facto segregation. McDonald’s was a restaurant open to black people with few options in a white-supremacist America.

From Protest to Big Macs

But the shift from militant civil rights struggle to the campaign for the liberal individualism of black franchising was not without protest. In cities all over America, including Chicago, Portland, and Cleveland, McDonald’s was the site of boycotts and picketing, as black community members demanded the fast food company put money back into the community from which it was extracting capital.

By the 1970s, with the rise of black nationalism, The Black Panther Party in Albina — a poor, black community in Portland with a high unemployment rate — waged a successful “redistributive program” that demanded local businesses reinvest in the community. With support from many businesses, volunteers, and even the University of Oregon’s Dental School, the Albina BPP ran the Malcolm X Dental Clinic, the Fred Hampton’s People’s Clinic, and a free hot breakfast program for children in schools.

When McDonald’s refused to donate money to their free breakfast program, the BPP launched a boycott and picketed McDonald’s, demanding that they redistribute supplies into the neighborhood and change their unfair labor practices that fired and exploited black employees. They also blamed McDonald’s for bringing cops into the neighborhood as its parking lot became a “base area for PIG attacks,” according to a Panther.  After a mysterious firebombing of the restaurant, McDonald’s complied with the Panthers, donating hundreds of hamburgers and cups to the BPP’s various community projects.

Black communities’ varied relationships to black capitalism reflects a significant break in black politics. The proponents for silver rights, black capitalism, and black political elites argue that the civil rights movement of the 1960s had to “grow up.” They claim that black people needed to start running for office and owning businesses. Chatelain argues, “The option of bartering civil rights for economic opportunity had been presented to African Americans for centuries.”  Liberal black politicians and the NAACP were ready to barter.

In the late 1970s and 1980s, the NAACP, known for waging legal battles against redlining and school segregation, had launched campaigns in Santa Barbara and Los Angeles to demand that McDonald’s and other franchises recruit more black franchisees. Instead of fighting for minimum wage increases and the right to unionize, NAACP used the franchise to fight for affirmative action quotas in restaurant ownership.

Since 2008, black franchisee numbers for McDonald’s have decreased. Meanwhile black cultural production, from hip hop to double dutch, has been used to sell McDonald’s products. McDonald’s invested in black communities because that’s where they collected their highest profits. The company offered college scholarships and low-wage labor to black youth, and was one of the first corporations to publicly celebrate Martin Luther King day when it was still considered controversial by many on the Right. In the early 1980s, for their traveling civil rights exhibit in honor of King, the company co-opted King’s image from the “radical Communist threat” fever dreams of the Right into a man who simply wanted everybody to get along. 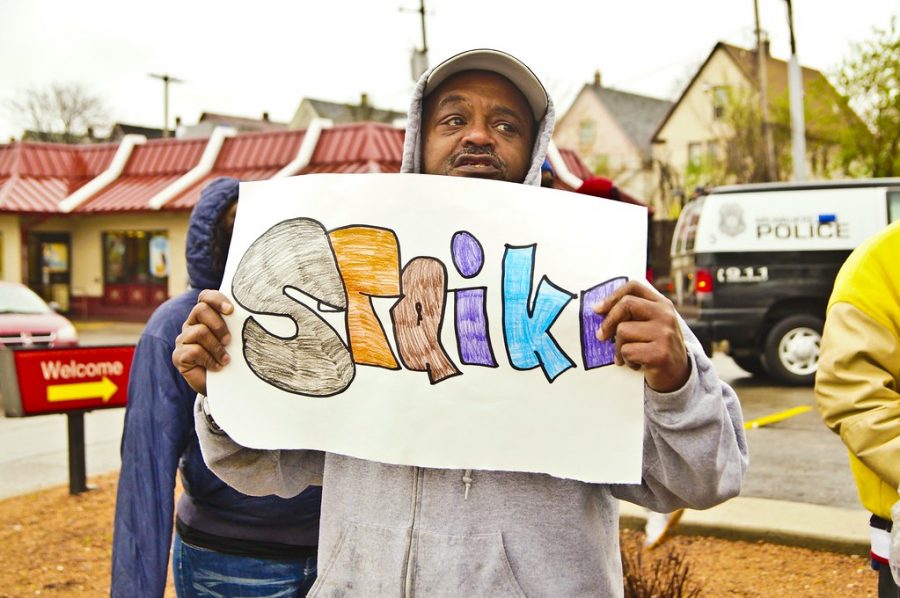 Chatelain at times argues that the role of black business in the movement for racial justice and economic access is complicated, yet she consistently returns to the essential role capitalism plays in reenforcing racial inequality and injustice; capitalism will never deliver expanded rights for black people, and black business is good for a few but not the many.

Whether it’s called black capitalism or empowerment, the politics of black business can serve many interests, except for those blacks most susceptible to the extremes of racism and capitalism. …The label black owned obscures the multiple systems that are not only outside of the hands of people of color, but will never be truly accessible under capitalism.

Chatelain explains that Franchise was spurred by her questions around the shortcomings of anti-obesity campaigns and a food justice movement that reduce the disparities caused by racial capitalism into poor and working class black people’s eating and shopping habits. The book devotes little time on this subject, but Chatelain’s point ties into her greater message: a movement for racial justice that focuses on changing individual behaviors in lieu of a structural critique of capitalism undermines real social change.

The corporate heads at McDonald’s still fight unionization efforts and attempts to raise the minimum wage tooth and nail. These are attempts to destroy and deny black self-determination. Black franchisees’ token efforts to turn McDonald’s into a kind of community hub will never replace dignified housing, healthy food choices, good education, meaningful employment, health care, and public safety in working-class and poor black communities. Meanwhile, in the wake of state abandonment, black communities will continue to rebel and negotiate. Chatelain’s Franchise is not just a thorough, fascinating history, but a paean to black resistance and community building.

Sabrina Alli is a writer and educator living in Brooklyn.