In 1926, New Jersey textile workers went on a massive strike, organized and supported by the Communist Party. The strike ultimately failed, but it showed the central role Communists could play in American class struggle. 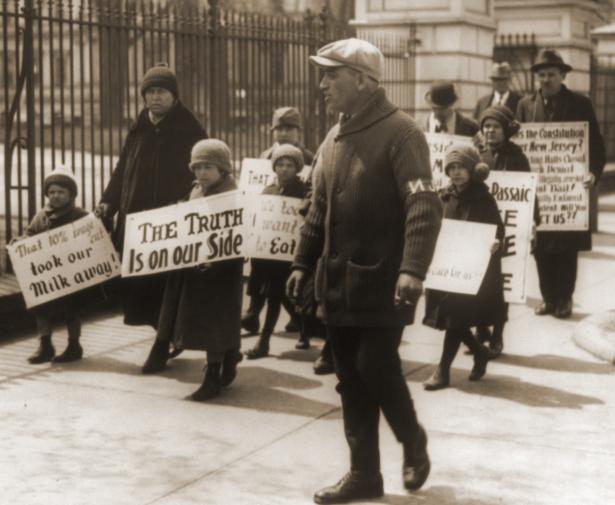 Strikers and their children in the 1926 Passaic textile strike, picketing outside the White House in Washington, DC, on April 15, 1926.,National Photo Company Collection / Library of Congress

Calvin Coolidge was president in 1926, and American capitalism was riding high. But in 1926, fifteen thousand wool workers in Passaic, New Jersey, went on strike. The Red Thread: The Passaic Textile Strike, a new book by Jacob A. Zumoff, a historian at New Jersey City University, tells its story. Passaic’s worker uprising occurred in the early days of the Communist Party USA, and while the strike ultimately failed, it showed that the party could organize workers, even those who had not previously belonged to unions, and could mobilize significant public support for their struggles.

The Passaic workers — mostly immigrants, many women — struck to demand that the bosses recognize their union and abandon plans for a 10 percent pay cut. The Communist Party (CP), particularly Albert Weisbord, played a crucial role in organizing the workers, mobilizing public support — that is, organizing solidarity strikes at nearby factories, picket lines, fundraising for relief for the strikers and their families, and sympathetic media attention — and making the Passaic strike into a national issue. The CP punched way above its weight: there were more strikers in Passaic than there were Communists in the United States.

Alfred Wagenknecht, a veteran communist from the left wing of the Ohio Socialist Party who had served prison time for resisting World War I, organized the relief effort that allowed the workers to stay out on strike for so long (about a year). Wagenknecht was a formidable fundraiser and coalition builder, organizing donated goods and labor from other union workers — bread from the bakery workers’ union in New York City, free haircuts from local barbers — and creating a system of stores and kitchens where strikers and their families could get food, coffee, or medical attention. The Communists also organized childcare for the strikers, including several summer camps.

The Communist Party was instrumental in bringing the story of the strike to a wider public far beyond Passaic, invoking its solidarity. Passaic is only a little over an hour from New York City — allowing for more media, Communist, and celebrity engagement than many other US labor struggles — but as a small city heavily dependent on manufacturing industries, its struggles were typical of 1920s working-class America. The Daily Worker, the Communist Party newspaper, covered the Passaic strike extensively, explaining why it should matter to Communists and to all working-class Americans. Mary Heaton Vorse, a noted labor journalist (and a member of the Communist Party, but she kept it secret so she would be better able to bring stories like this to non-Communist audiences), wrote publicity for the strike and wrote articles about it for many publications. Other storytelling projects included an illustrated booklet called Hell in New Jersey and a documentary about the strike. The involvement of intellectuals and artists in strike support and publicity was a precursor to the Communists’ “cultural front” strategy of creating alternative culture, which became much more developed in the 1930s.

Red Thread is a sobering study on the reality of police brutality and repression against workers (the history of the nineteenth and early twentieth century tends to show that if you’re wondering why workers in the United States put up with such terrible conditions, violence and terrorism from the ruling class can never be ruled out). The police were relentless in Passaic, harassing and arresting strikers constantly, even framing them in the bombing of scabs’ homes. Police arrested almost nine hundred strikers or picketers between February 1926 and February 1927. Ninety-eight people were given at least six months in jail, with strike organizers — and celebrity supporters like socialist leader Norman Thomas — targeted with multiple arrests and higher bail. The ACLU collected more than three hundred affidavits attesting to police violence against strikers.

Those involved in left politics anytime, ever, will recognize some of the dynamics in this account. For one thing, there was so much factionalism (though the Communists were able to mostly put aside their differences with other comrades during the strike). And, in an echo of contemporary debates over the “professional-managerial class” and its outsize role in socialist politics, the faction most active in the strike was often stigmatized as inadequately working-class (“City College boys”) and was eager to use the strike to burnish its blue-collar credibility.

Zumoff describes inspiring commitment on the part of the Communists and the workers. I’d love to know more about what kinds of organizing conversations persuaded the workers to go on strike and convinced so many in the community to come out and support them, but it is hard for historians to raise or answer such questions, as they are rarely addressed in written materials. That can’t be helped.

Red Thread features some wonderful archival photos. One, on the cover of the book, shows a sign from the picket line that reads: “The Passaic Strike Is the Fight of the Entire Working Class.” Others show black silk dyers walking off the job in nearby Lodi; Elizabeth Gurley Flynn giving a speech on strikers’ behalf; young women strikers walking past armed cops; a bespectacled Albert Weisbord behind bars.

With so many Communist Party publications, letters, and memoirs, Zumoff’s archival material is rich, and the book only falters when he strays from this substantial trove of evidence. Like many left historians, he sometimes can’t resist blaming historical actors’ incorrect political positions for their political failures, flights of interpretation that require him to reach beyond the archive. For example, he implies that the Communists would have been more successful in organizing women workers if they’d had a sharper critique of women’s oppression within the nuclear family, as the early Bolsheviks did, instead of just focusing on women’s workplace exploitation. Um, maybe? But he doesn’t offer any documentation.

The strike failed by any reasonable measure: the workers eventually went back to work without winning anything (and only a few of them joined the Communist Party). Zumoff argues convincingly that Communist organizing was not the cause of the strike’s defeat; rather, Communist activism allowed the strike to go on for as long as it did. He rightly refrains from spinning the defeat as a victory — in fact, he criticizes the Communists for doing this — nor does Zumoff try too hard to explain the defeat. It’s common for strikes to fail. Sometimes capitalists are simply more powerful than workers. In any case, both sides — workers and bosses — understood that the stakes of the strike were bigger than wages, and that Passaic was a battle in a longer-term class war.

Liza Featherstone is an American journalist and journalism professor who writes frequently on labor and student activism for The Nation and Jacobin.