A federal official has recommended that the results of the union election at Amazon’s Bessemer, Alabama warehouse be thrown out and a second election be held, due to the company’s illegal anti-union tactics. 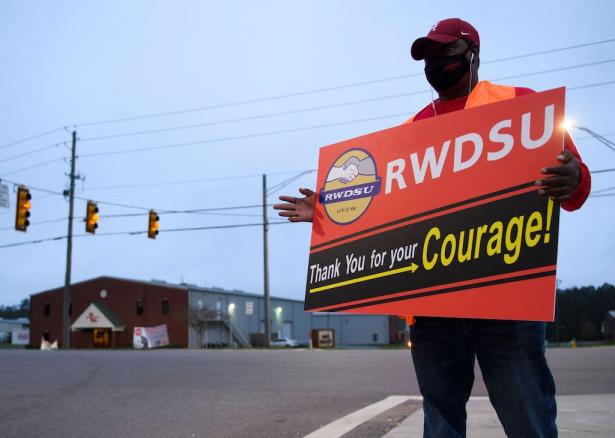 A National Labor Relations Board (NLRB) hearing officer has recommended that the April results of the union election at Amazon’s Bessemer, Alabama warehouse be thrown out and a new election be held, reflecting the officer’s view that the company illegally interfered in workers’ right to organize.

Should the recommendation be upheld by the board, the Retail, Wholesale, and Department Store Union (RWDSU) will have a shot at overturning its initial defeat, where workers voted 1,798 to 738 against unionizing, with 505 contested ballots set aside (the overwhelming majority of which were challenged by Amazon, according to the union). The mail-in voting took place from February 8 to March 29, after the union filed for an election in November 2020. Ten days after the votes were counted in April, RWDSU filed objections with the NLRB, which led to three weeks of hearings in May, with both sides calling witnesses.

The hearing officer’s recommendation will be considered by the NLRB’s regional director in Atlanta, who will rule on the case in several weeks. Typically, regional directors follow hearing officers’ recommendations. Amazon can then appeal the decision to the NLRB in Washington, DC. Should that happen, the high-profile case will be taken up by a board that will likely be majority Democrat. If the board rules in the union’s favor, a new election could take place this year.

“Workers endured an intensive anti-union campaign designed by Amazon to intimidate and interfere with their choice on whether or not to form a union,” said RWDSU in a statement on the recommendation. The union stated that the recommendation “is based on Amazon’s illegal tactics and shows how the company was willing to use any and all tactics, illegal or otherwise, to stop workers from forming a union. Workers now await a formal Decision on Objections from the Regional Director, which would include a Direction of a Second Election if the hearing officer’s recommendation is adopted.”

RWDSU’s objections were especially focused on the installation of a dropbox for mail-in ballots outside of the Amazon warehouse. The company had pushed hard for an in-person vote, a preference that the NLRB rejected on the basis of the dangers posed by COVID-19. The union has argued that the placement of a mailbox outside the warehouse’s entrance violated the agreed-upon procedures and was interpreted by workers as a means of surveillance, which tainted the outcome.

In filing its objections, RWDSU cited emails showing Amazon had pressured the United States Postal Service to install the mailbox before the start of mail-in voting. It also said that the company had created a culture of fear in the shop, with managers, directed by top-dollar anti-union consultants, conveying to workers that they could lose pay and benefits should they unionize, as well as face the possibility of the company closing the warehouse. The report helpfully notes that all of this is legal.

The officer’s report takes up these objections, finding merit in the charges regarding the mailbox, the installation of which it characterizes as Amazon’s “unilateral decision.” The report states that “in an effort to placate the Employer, the USPS officials at the highest levels jumped through hoops” to place the mailbox according to Amazon’s preferences.

Put plainly, the USPS did whatever Amazon asked of it to help bust the union drive. As such, the onsite mailbox “destroyed the laboratory conditions” required of NLRB elections and “justifies a second election.”

“Throughout the NLRB hearing, we heard compelling evidence how Amazon tried to illegally interfere with and intimidate workers as they sought to exercise their right to form a union,” said RWDSU president Stuart Appelbaum in a statement on the NLRB recommendation. He added that “Amazon’s behavior throughout the election process was despicable. Amazon cheated, they got caught, and they are being held accountable.”

In a statement on the preliminary hearing, Amazon said that the workers “overwhelmingly” opposed unionizing, and that it plans to appeal any rulings that overturn the election result.

While the recommendation is a well-deserved blow for Amazon, which spends massive amounts of money to stop workers from organizing, the rerun election will be an uphill battle for workers. In recent years, according to political scientist Kevin Reuning, reruns end in union certification less than half the time. Initial elections have a higher success rate.

Part of the explanation for this gap is that companies’ ferocious anti-union campaigns can accomplish what organizers call “burning the turf,” turning workers against one another as they are threatened, lied to, manipulated, and otherwise given the message that a union is the cause of, rather than a solution to, many of their problems.

Workers in Bessemer underwent a lengthy period of anti-union campaigning. They sat through captive-audience meetings that were held, according to the hearing officer, six days a week, eighteen hours a day, overseen by a “cadre of private paid consultants.” These meetings are designed to drill into their heads that the company, rather than a union, is in their best interests. All of this contributes to exhaustion, and could lead them to vote against unionizing again.

Amazon’s extraordinarily high turnover introduces another variable. While data for Bessemer specifically isn’t available, the company has a roughly 150 percent turnover rate around the country, meaning it’s possible that the majority of workers voting in a rerun would be people who didn’t work at the Bessemer warehouse when the first election took place. That means it’s possible that the company’s propaganda won’t have reached them, but it also means a new set of workers need to be organized into the union drive, inoculated against company indoctrination, and won to a belief in their own power through the union.

Existing labor law offers few deterrents for companies with few scruples about breaking labor law. There are no NLRB-imposed financial penalties for illegal actions and little stopping Amazon from waging a second, entirely legal, anti-union campaign. The PRO Act, the recently proposed wide-ranging labor-law reform bill, would impose stiff financial penalties when companies break labor law. The bill also includes a provision that would make a finding of illegal interference by the employer mean certification of the union, rather than the scheduling of a new election, which would all but eliminate bosses’ incentives to break labor law. Of course, the PRO Act would have also altered the Bessemer union drive in the stages leading up to the vote, perhaps most crucially, by removing Amazon’s ability to weigh in on the size of the bargaining unit in the first place, which had crucial impact on the vote’s outcome.

With the process moving forward, the Bessemer warehouse is one of several organizing efforts at Amazon, which is now the second-largest private employer in the United States and still growing. The International Brotherhood of Teamsters (IBT), with over 1 million members, recently announced the formation of an Amazon Division and is training rank-and-file members in how to organize Amazon workers. Christian Smalls, a former worker at Amazon’s Staten Island warehouse, is part of this effort; he recently told NBC News that the independent union effort is moving closer to filing for an NLRB election. And other networks, such as Amazonians United, are organizing inside the warehouses, picking and winning fights on the shop floor (not to mention the unions of Amazon workers that exist outside of the United States).

Amazon workers face huge obstacles to organizing, but the only way out is through. The company poses a threat to workers across sectors. There’s no way around it: Amazon must be organized.