A new member of the liberal “Squad” stepped to the forefront this week, leading a Capitol steps sit-in that forced the White House to act. 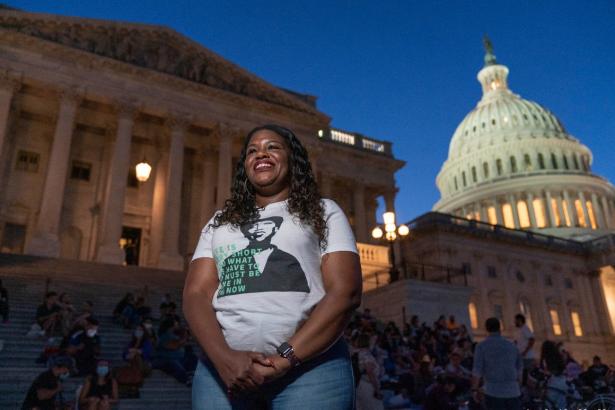 Cori Bush arrived in Congress as an heir to Alexandria Ocasio-Cortez. Now the political neophyte is coming into her own.

Bush has led a one-woman protest on the Capitol steps over the last several days that forced the eviction crisis to the top of the nation's agenda even after the House left town without taking action on the issue. Under intense pressure from the left, President Joe Biden on Tuesday afternoon announced a short-term fix to prevent millions of families from losing their homes despite questioning the constitutionality of doing so.

The Missouri Democrat’s surprising win after an impromptu vigil on the East Front — which has been broadcast on national television and drawn high-profile figures such as Jesse Jackson and Senate Majority Leader Chuck Schumer — illustrates the burgeoning influence held by the freshman progressive and other members of the so-called Squad both inside and outside the Capitol. Once dismissed as liberal firebrands with large Twitter followings but little impact inside Congress, the Squad has added members and continued knocking off high-profile incumbents, forcing senior Democrats to listen.

Share this article on
“This is why this happened. Being unapologetic. Being unafraid to stand up,” Bush told reporters as Biden made his announcement Tuesday after she'd spent several days sleeping, mostly sitting up, on the building's steps. 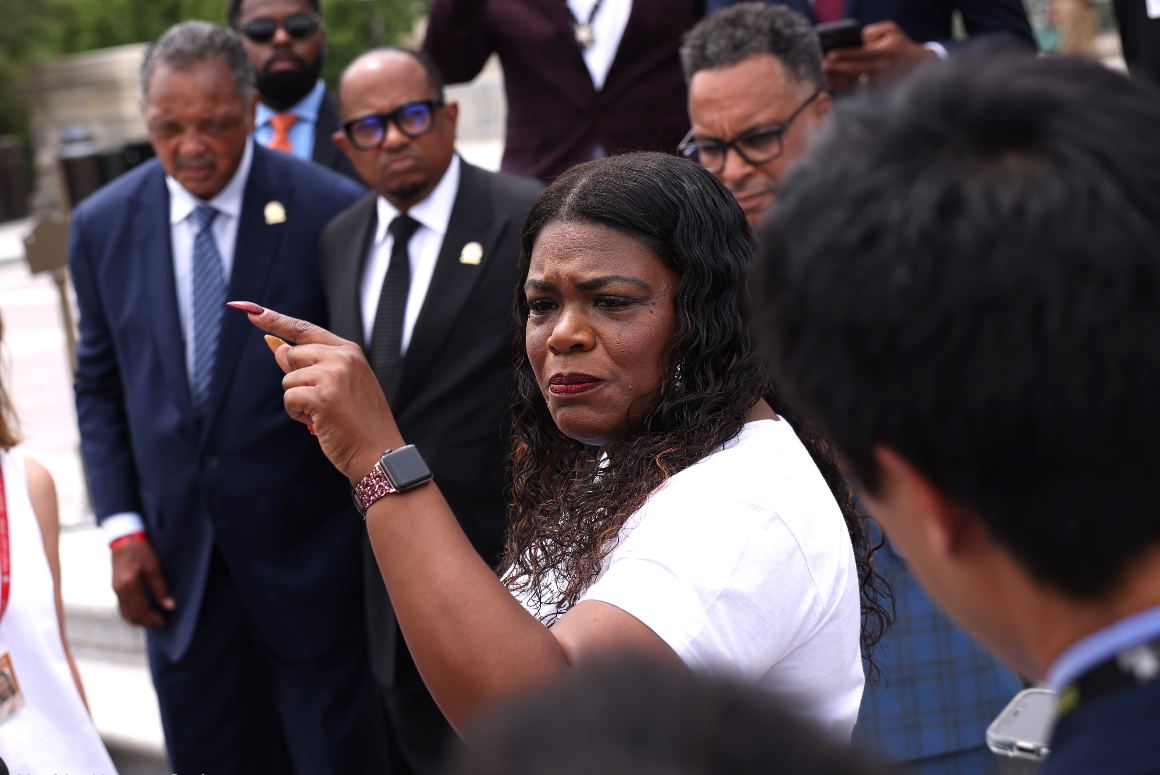 Rep. Cori Bush speaks alongside civil rights activist Jesse Jackson at a rally against the end of the eviction moratorium at the U.S. Capitol. | Kevin Dietsch/Getty Images

“You did this,” a jubilant Schumer told Bush and her group of allied Democrats after jogging across the Capitol plaza as the news broke. He bear-hugged Bush and Ocasio-Cortez, who hasn't ruled out a primary challenge to him next year, declaring: “You guys are fabulous.”

As Bush continued her protest through Tuesday, she got a boost from Speaker Nancy Pelosi, who was pushing Biden privately. Pelosi spent the weekend phone banking with the White House, including chatting with Biden, pressing the administration to extend the moratorium. Notably, Bush’s strategy shifted over the weekend to align with Pelosi, going from calling for a House vote that was doomed to fail to pushing for the White House to act.

Bush, 45, is the latest member of the group to capture national headlines and has arguably delivered the most impactful result since the Squad first formed in 2018. After the Capitol sit-in by Bush, who has experienced homelessness after eviction, millions of Americans will see at least a temporary reprieve from the same threat.

"I can’t tell you just how important it is, and how much of a change can be brought, by having people who have personal experiences [with] the policy that they are trying to implement," said Rep. Ilhan Omar (D-Minn.) a founding member of the group.

Their fight almost certainly isn't over: Biden’s evictions fix is expected to draw a court challenge that could put the onus back on Congress to cobble together a response. Still, Bush’s allies say the intense pressure from her and other Democrats this week compelled the White House into a step it had been highly reluctant to take just hours earlier.

But beyond the power of grassroots activism, the Missouri Democrat’s move also shows that she’s building bonds with influential Democrats after coming to Congress as an outsider who knocked off a beloved member of the powerful Congressional Black Caucus.

“I don’t care about the spotlight. It doesn’t bother me, it doesn’t make me feel good,” she told POLITICO in a brief interview after holding court on the building’s steps since Friday. “I just want to see this happen for my people.”

While Bush was quick to join the Squad after arriving in January, her ties to the CBC had been more fragile after her defeat of former Rep. Lacy Clay (D-Mo.), whose father had co-founded the group 50 years ago. But Joyce Beatty (D-Ohio), the chair of the Black Caucus, said she had flown back from Ohio and joined the vigil after Bush called to invite her.

“She called me to tell me what she was doing, and she said it would mean a lot to her to have me here. She’s one of my members, so I’m here,” Beatty said in an interview after taking part in Bush’s vigil. 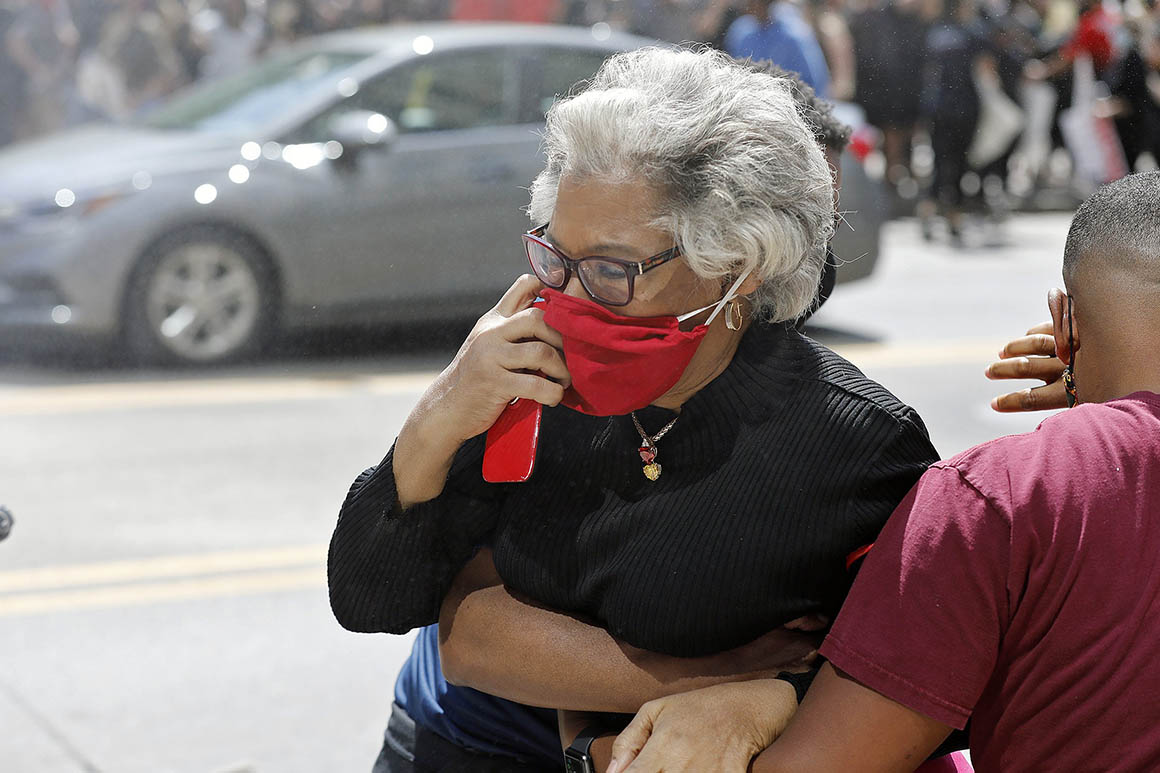 And despite the tensions within the Black Caucus over this week’s Ohio primary battle to replace Marcia Fudge, Beatty said housing was something they could unite around: "Fifty-seven members of the Congressional Black Caucus all support extending the moratorium,” she told attendees of the vigil.

Rep. Barbara Lee, a former chair of the CBC and the Congressional Progressive Caucus, went so far as to praise Bush for stirring “the conscience of the nation” in a victory call late Tuesday for the latter group.

It's not just the CBC who showed up to support Bush. The freshman progressive has entertained a wide array of Democratic luminaries and crowds of selfie-taking supporters during her outdoor protest. The line-up of fellow Democrats — from House Intelligence Committee Chair Adam Schiff (D-Calif.) to moderate Rep. Dean Phillips (D-Minn.) — illustrates not just the progressives’ power in a tightly held majority, but also their growing sway.

As a nearly 100-member coalition, progressives remain a major power center in caucus decisions. They will have a huge role to play in as the looming, intergenerational battle over House Democrats' next leaders after Pelosi and her longtime deputies step aside.

“She wasn't going to give up. And then we didn’t give up on her either,” said Rep. Jimmy Gomez (D-Calif.), who joined Bush in her protest on the steps. “All of us were a team, trying to push the administration to get the quickest result to this.” 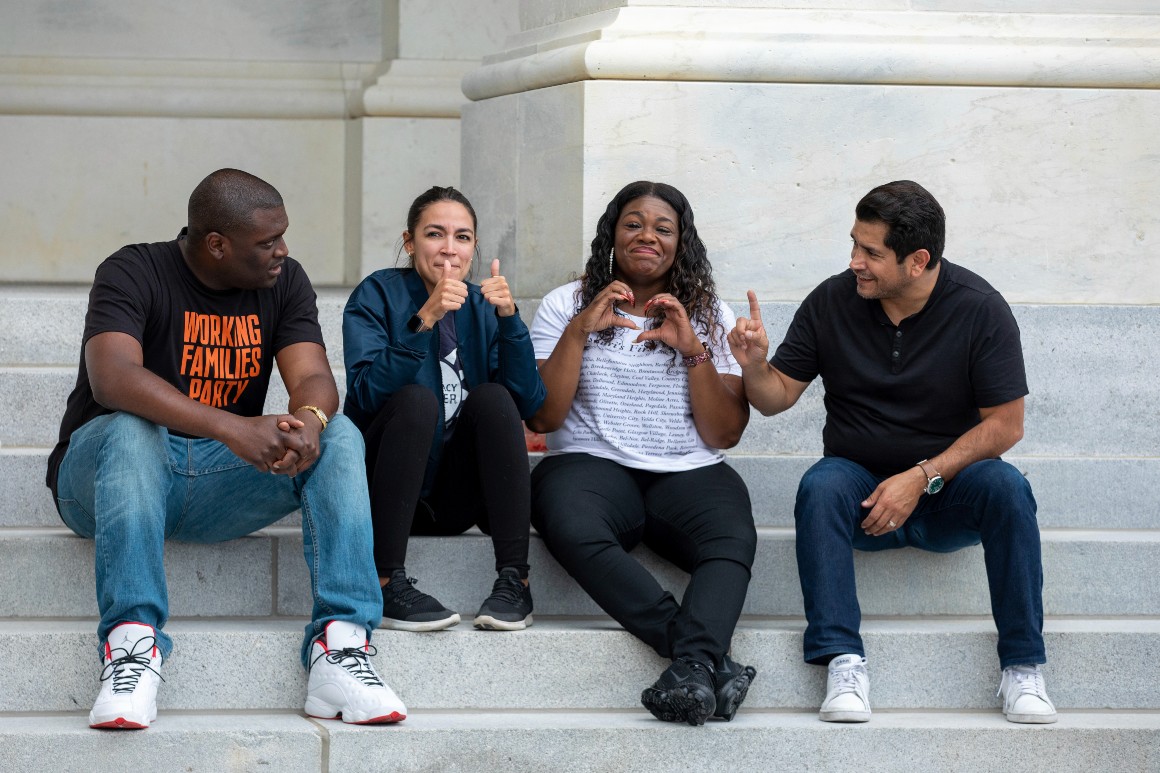 With the House deadlocked and about to head home Friday night, a visibly nervous Bush and Ocasio-Cortez held an impromptu presser outside Speaker Nancy Pelosi’s office, insisting that inaction was not an option. Inside, House Financial Services Chair Maxine Waters (D-Calif.), a progressive dean who’s spent 30 years in Congress, worked the phones with Democratic leadership.

Afterwards, the two junior members dashed to the House floor in an eleventh-hour attempt to disrupt their party’s plan to leave town by forcing a roll-call vote on whether the House should leave — using a procedural move borrowed from GOP hardliners. But the House had adjourned before Bush and Ocasio-Cortez could get to the floor in time.

Bush later said that she and Ocasio-Cortez were walking away from the Capitol together on Friday night when she made the snap decision to stay. Bush recalled turning to her friend and asking if Ocasio-Cortez wanted to join her.

“And she said yes,” Bush said in an interview. 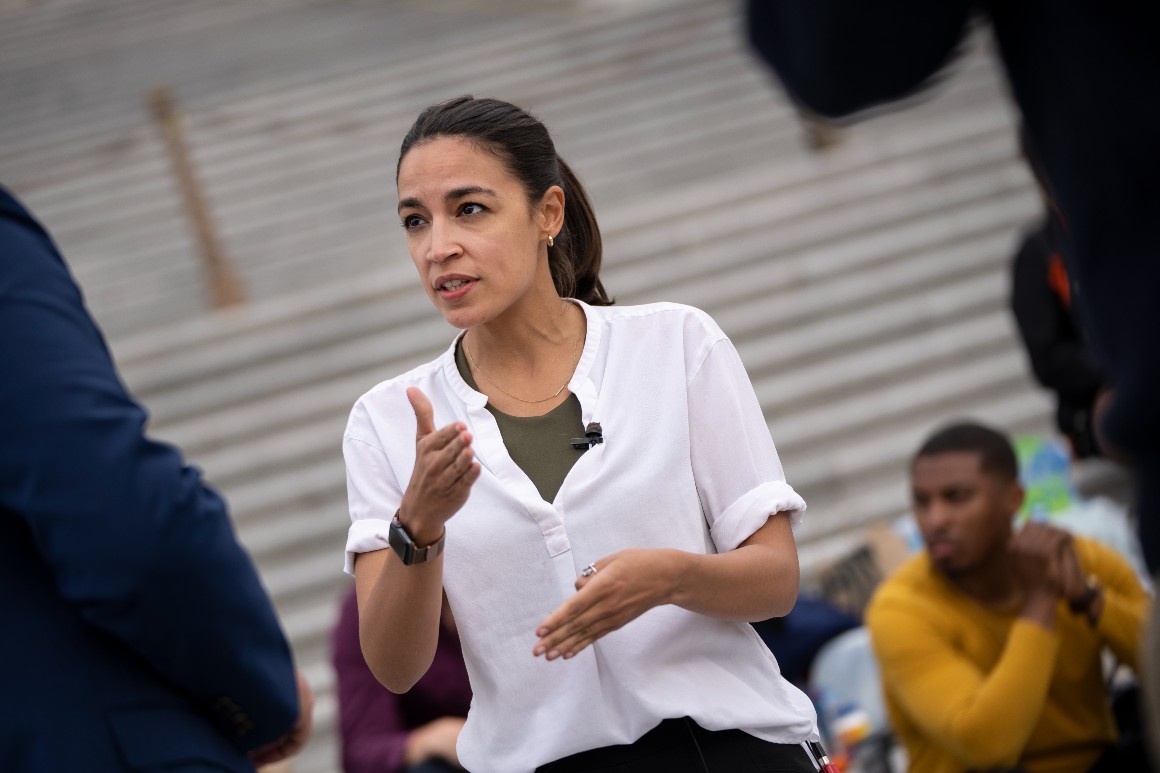 Rep. Alexandria Ocasio-Cortez talks with a reporter as she protests the expiration of the federal eviction moratorium on the House steps of the U.S. Capitol. | Drew Angerer/Getty Images

While just a freshman, Bush is no stranger to the public eye after her stunning upset of Clay last fall. Even before she was sworn in this January, she was the subject of a New Yorker profile. She made the cover of Teen Vogue during her first month in office.

Before that, she first rose to prominence leading Black Lives Matter protests near Ferguson, Mo., a short drive from where she was living as a nurse and pastor when 18-year-old Michael Brown was shot and killed by police in 2014.

And this week isn't Bush’s first sleep-in. In 2018, the then-activist remained outside Sen. Roy Blunt’s (R-Mo.) district office for days to protest the confirmation of Supreme Court Justice Brett Kavanaugh.

Police brutality was one of a long list of priorities when Bush launched her third congressional bid, which she won with a boost from Bernie Sanders — the Vermont independent and liberal lion who also visited Bush and Ocasio-Cortez on the Capitol steps this week. Another of Bush's top issues was homelessness; she and her two young children were forced to live out of her car after failing to make rent.

As a long line of advocates-turned lawmakers have often encountered before her, Capitol Hill is a uniquely stressful stage, but Bush bet that her tactics as an organizer could bring her success in Washington. That bet paid off on Tuesday — at least for now.

“Activists in Congress — so expect for things to be different than what maybe people are used to," she told reporters on Tuesday night, as she prepared to wrap her protest and return home. "We don't have the same eyes, we don't have the same background or the same agenda as some others.”