"Without meaningful accountability for that member's actions, we risk normalizing this behavior and endangering the lives of our Muslim colleagues, Muslim staffers, and every Muslim who calls America home," said Rep. Ayanna Pressley.

"Words have consequences, we must acknowledge that and respond with action," Pressley said at a press conference announcing the measure. 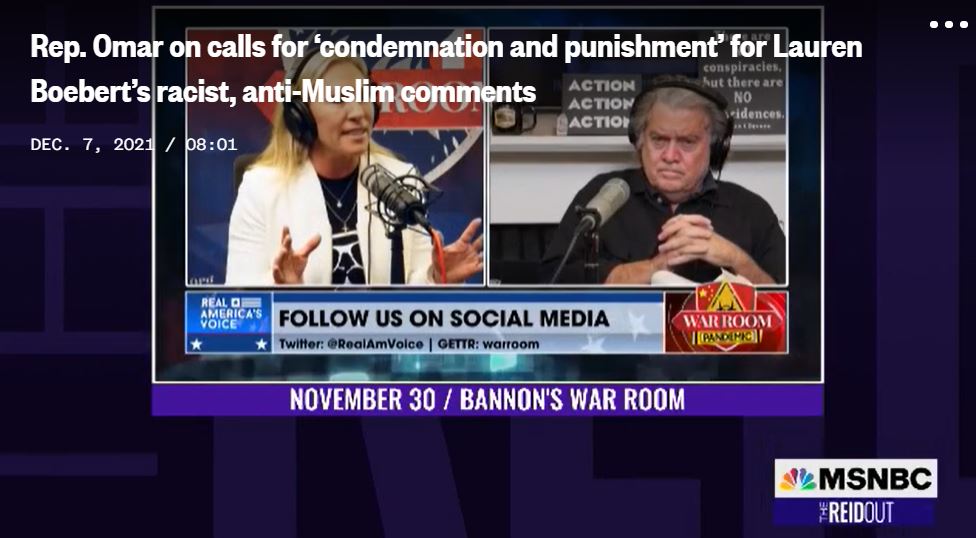 Specifically, the resolution would remove Boebert from the House Budget Committee and House Natural Resources Committee.

Pressley said the resolution also aims to "send a powerful message to every Muslim and every marginalized person who has ever questioned their place in this country, or in the halls of power: We see you, you belong, you are powerful and you deserve a life free from fear, and filled with dignity and love."

More than a dozen House Democrats back the resolution, according to Pressley’s office, including several other members of the so-called “squad” such as Reps. Cori Bush, D-Mo., Rashida Tlaib, D-Mich., Alexandria Ocasio-Cortez, D-N.Y., as well as the chairwoman of the Progressive Caucus, Rep. Pramila Jayapal, D-Wash.

The resolution comes after a video emerged in late November that showed Boebert suggesting that Omar, who is Muslim and wears a hijab, was mistaken for a terrorist in an elevator both were riding in at the U.S. Capitol.

“Representative Boebert, whatever her intentions may be, for her racism and flagrant bigotry needs to experience a consequence for her actions, whether she seeking it out or not. Because when we inconsistently apply consequences to bigotry, we invite more people to test these boundaries,” Ocasio-Cortez said Wednesday.

Pressley said in a statement previewing her resolution that it’s “dangerous” for a member of Congress to “repeatedly use hateful, anti-Muslim rhetoric and Islamophobic tropes towards a Muslim colleague.”

“Without meaningful accountability for that Member’s actions, we risk normalizing this behavior and endangering the lives of our Muslim colleagues, Muslim staffers and every Muslim who calls America home,” Pressley said. “The House must unequivocally condemn this incendiary rhetoric and immediately pass this resolution. How we respond in moments like these will have lasting impacts, and history will remember us for it.”

Rep. Rashida Tlaib, D-Mich., who is also Muslim, became emotional during the press conference and said that Boebert is invoking violence against all Muslim citizens. “When she said that, she was invoking violence and Muslims all across our country,” Tlaib said. “Ilhan Omar, when I check up on her, she's like, ‘Sis, I survived war, I can survive this.’ She says that so that I can stop crying.”

Asked Wednesday by NBC News about the push to remove her from committees, Boebert declined to comment.

Omar said in an interview on CNN Sunday that she was “very confident” that House Speaker Nancy Pelosi, D-Calif., would take “decisive action” in her defense.

Ocasio-Cortez told The Hill newspaper Tuesday night, “I haven’t heard anything binding from leadership, which in and of itself is an embarrassment.” She continued, “This shouldn’t take this long; this should not drag on. It’s pretty simple. It doesn’t have to be a big huge thing. It’s pretty open and closed."

Asked at her weekly news conference Wednesday what possible action might be taken against Boebert, Pelosi said, "When I'm ready to announce, I'll let you know."

Pressed further to address Boebert's remarks, Pelosi said of her Republican counterparts, "It’s their responsibility to deal with their people. I don’t feel like talking about what the Republicans are doing or aren’t doing about ... the disgraceful behavior of their members."

Democrats have lashed out at House Majority Leader Kevin McCarthy, R-Calif., for failing to condemn Boebert for her comments. He said last week that Boebert apologized for her actions.

Meanwhile, more than 400 congressional staff members, including over 50 who are Muslim, are calling on House leaders to “categorically reject the incendiary rhetoric” in the workplace in the wake of Boebert’s comments. 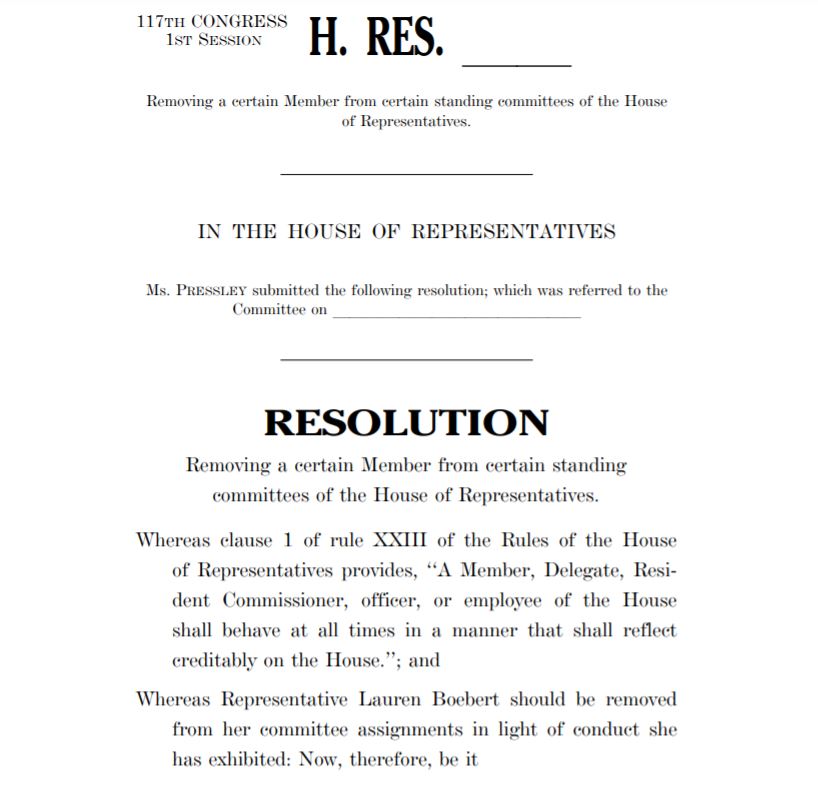 The lawmakers’ resolution follows Boebert’s repeated use of Islamophobic, racist and hateful comments and incitement of anti-Muslim animus, and Leader Kevin McCarthy’s refusal to hold her accountable for her dangerous conduct. The resolution also comes amid growing calls from Members of Congress for meaningful accountability.

“For a Member of Congress to repeatedly use hateful, anti-Muslim rhetoric and Islamophobic tropes towards a Muslim colleague is dangerous. It has no place in our society and it diminishes the honor of the institution we serve in,” said Rep. Pressley. “Without meaningful accountability for that Member’s actions, we risk normalizing this behavior and endangering the lives of our Muslim colleagues, Muslim staffers and every Muslim who calls America home. The House must unequivocally condemn this incendiary rhetoric and immediately pass this resolution. How we respond in moments like these will have lasting impacts, and history will remember us for it.”

"Islamophobia and any form of hate is a direct attack on people in this country and our democracy,” said Rep. Bowman. “Muslims belong in everywhere Congress and any place of power in the country. They need to know that Congress will not accept Islamophobia. We are putting forth this resolution because we love our democracy and our Muslim brothers and sisters. Rep. Boebert has gone beyond expressing usual dissent for a colleague and their views and is endangering Rep. Omar in addition to inciting violence. Trump ran on Islamophobia, and that disease is still in government. We cannot allow any forms of Islamophobia, anti-Blackness, anti-immigrant, and xenophobic sentiments stand in the halls of Congress or part of our government. Rep. Boebert must be held accountable.”

“St. Louis and I did not come to Congress to leave Islamophobic, racist, and inciteful attacks unchecked,” said Congresswoman Cori Bush. “Congressional leadership has a responsibility to show that this kind of behavior is unacceptable—starting in the halls of power. We must be assured that no member is above accountability, and Republican leadership has failed to deliver any such accountability for Boebert. It is time for Democratic leadership to act and pass our resolution to not only protect Rep. Omar, but the livelihoods and lives of Muslim communities around our country.”

“Once again, Kevin McCarthy refuses to condemn the hatred in his own caucus,” said Rep. Chu. “Rep. Boebert’s comments, which she repeated, were not subtle nor were they a slip of the tongue. It was the latest in a long string of openly Islamophobic and bigoted comments which have repeatedly led to violence. We saw this in the wake of September 11th, when the exact lie that Rep. Boebert is repeating today, led to a spike in anti-Muslim hate crimes. And we have seen it in the numerous death threats directed at Rep. Omar and others since being elected and becoming targets of Republican hate speech. For Rep. Boebert to repeatedly make this claim now, just months after white nationalists stormed the Capitol, shows an incredible disregard for the safety of her peers, if not outright hostility. This would be unacceptable in any workplace, and is certainly unacceptable in the halls of Congress. If Rep. Boebert chooses to spend her time threatening the safety of a colleague because of her religion, it will not be from the privileged perch of Congressional committee.”

“This type of bigotry is disgusting, but unfortunately not surprising,” said Rep. Lee. “Anti-Muslim rhetoric is not, and will never be, a laughing matter. Rep. Boebert must be held accountable to show that hate speech will not be tolerated in Congress.”

“I stand with my friend and colleague Rep. Ilhan Omar. No one, Member of Congress or otherwise, should face bigotry in their workplace. Rep. Boebert still owes her an apology for her hateful rhetoric and actions, and short of that the House should take further action. Islamophobia has no place in our country or the Halls of Congress," said Rep. Jesús “Chuy” García.

“Democrats are, and should be, focused on building real and symbolic bridges, both within and to all our communities. We cannot lose sight of that,” said Rep. Wasserman Schultz. “But a failure to exact consequences for this dangerous bigotry will lead to more hate, and inevitably, more threats and violent rhetoric or actions aimed at our own Members and the communities of which they are a part. We must hold Members accountable whose rhetoric puts their colleagues and staff in harm’s way. These Islamophobic comments by one of our fellow Members must be called out. Hate is hate, and these types of incendiary remarks can and do inspire violence and direct threats, both to the individuals they are targeted at, and to the larger communities they represent. A pipe bomb that sat in my district office for over 24 hours, and was handled by my staff, testifies to that frightening reality. Sadly, there are countless more examples I could cite. As a Jewish Member, my office receives threats regularly, as do members of my larger community.”

On December 1, Democratic Caucus Chairs released a statement calling for Rep. Boebert to be removed of her committee assignments.