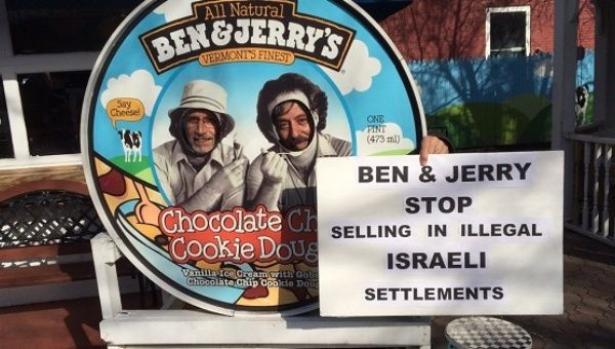 The Boycott, Divestment and Sanctions (BDS) movement got a powerful boost when Ben & Jerry’s announced its boycott in the illegally Occupied Palestinian Territory. On July 19, the iconic ice cream company said in a statement, “We believe it is inconsistent with our values for Ben & Jerry’s ice cream to be sold in the Occupied Palestinian Territory (OPT),” which includes the West Bank, East Jerusalem and Gaza. The statement quoted an op-ed penned by co-founders Bennett Cohen and Jerry Greenfield in The New York Times, calling the boycott “a rejection of Israeli policy, which perpetuates an illegal occupation that is a barrier to peace and violates the basic human rights of the Palestinian people who live under the occupation.”

Israel lashed back, threatening “severe consequences” for the boycott and urging U.S. states to employ anti-boycott laws. In every case but one, however, courts have struck down such legislation as unconstitutional. Boycotts are protected by the First Amendment’s guarantees of freedom of speech, association and assembly.

The BDS movement has had a significant impact on Israel. BDS played a major role in the 46 percent decrease in foreign direct investment in Israel during 2014.

But Ben & Jerry’s boycott “may be our most important BDS win to date,” Sandra Tamari, executive director of the U.S.-based Palestinian advocacy organization Adalah Justice Project, said in a statement. “It opens the door for other mainstream companies to heed the Palestinian call for cutting ties with the Israeli state,” Tamari said. “The over-the-top response by Israeli leaders to the company’s announcement, including threats to compel U.S. states to apply unconstitutional state laws limiting boycotts against Israel, shows that immaterial victories such as these can make a vast empire tremble, and that is the power of organizing.”

What Is the BDS Movement?

The BDS movement was launched in 2005 by 170 Palestinian civil society organizations which called for boycott, divestment and sanctions. They described BDS as “non-violent punitive measures” to last until Israel complies fully with international law by (1) ending its occupation and colonization of all Arab territory and dismantling the barrier wall (85 percent of which is on Palestinian land); (2) recognizing the fundamental rights of Arab Palestinian citizens of Israel to full equality; and (3) respecting, promoting and protecting the rights of Palestinian refugees to return to their land as mandated by UN General Assembly Resolution 194.

It’s important to fully comprehend the specific actions of “boycott,” “divestment” and “sanctions” in order to understand the BDS movement’s overall mission. Boycotts entail withdrawing support for Israel, and Israeli and international companies that are violating Palestinian human rights — including Israeli cultural, academic and athletic institutions. Divestment campaigns pressure universities, churches, banks, pension funds and local councils to remove their investments from all Israeli and international companies that are complicit in violating Palestinian rights. Sanctions campaigns urge governments to end military trade and free-trade agreements and exhort them to expel Israel from international fora.

BDS follows in the tradition of U.S. civil rights and consumer boycotts and the boycott that helped end apartheid in South Africa. “The Boycott, Divestment and Sanctions campaign remains the most formidable weapon in our arsenal” of solidarity with the Palestinians, former South African intelligence minister Ronnie Kasrils wrote at Common Dreams. “It worked to bring about the demise of South African Apartheid behind the internal people’s resistance struggle, and is growing in scope and efficacy, to the extent that Israel has identified the non-violent global movement as a strategic threat. Israel, like apartheid South Africa must pay for its crimes — above all by sanctions.”

Indeed, the Israeli human rights organization B’Tselem as well as Human Rights Watch have both recently confirmed that Israel maintains a system of apartheid. Israeli apartheid constitutes a crime against humanity under the Rome Statute of the International Criminal Court (ICC).

The ICC has launched a formal investigation of Israel for war crimes, including the transfer by the occupying power Israel of its own civilian population onto occupied Palestinian land. Israel’s illegal Jewish settlements on Palestinian land violate the Fourth Geneva Convention. Approximately 700,000 Israelis live in Jewish-only settlements in the occupied West Bank and occupied East Jerusalem.

To make way for Jewish settlers, Israel is tacitly supporting the ethnic cleansing of Palestinian families from their homes in the Sheikh Jarrah neighborhood of occupied East Jerusalem. The UN Office of the High Commissioner for Human Rights said in May that expulsions from Sheikh Jarrah “may amount to a war crime,” citing the Fourth Geneva Convention.

Israeli Foreign Minister Yair Lapid called Ben & Jerry’s boycott a “shameful surrender to antisemitism.” But in their Times op-ed, Ben and Jerry, who sold the company to Unilever in 2000, wrote, “As Jewish supporters of the State of Israel, we fundamentally reject the notion that it is anti-Semitic to question the policies of the State of Israel.”

Criticizing Israel — even if one is an opponent of the state itself — is not antisemitic. The BDS movement targets the policies, not the people, of Israel. As BDS co-founder Omar Barghouti wrote in the Times in 2014, “Arguing that boycotting Israel is intrinsically anti-Semitic is not only false, but it also presumes that Israel and ‘the Jews’ are one and the same.” Barghouti continued, “This is as absurd and bigoted as claiming that a boycott of a self-defined Islamic state like Saudi Arabia, say, because of its horrific human rights record, would of necessity be Islamophobic.”

Israeli President Isaac Herzog accused Ben & Jerry’s of “a new form of terrorism,” that is “economic terrorism,” and pledged to fight “this boycott and terrorism in any form.”

Gilad Erdan, Israel’s ambassador to the United States and the United Nations, wrote a letter to the governors of 35 U.S. states urging them to retaliate against Unilever with anti-boycott laws. Republican officials in Florida, Texas, New York, Pennsylvania and Maryland are calling for boycotts of Ben & Jerry’s.

Meanwhile, President Joe Biden roundly opposes BDS. His administration, like Obama’s, continues to fund Israel’s illegal military occupation of Palestinian territory to the tune of $3.8 billion per year and shields Israel from criticism in the UN Security Council.

There is strong support for BDS by myriad civil and human rights organizations. Forty-two of them — including the Center for Constitutional Rights, New York Civil Liberties Union, United Methodist Church Global Ministries, Veterans for Peace NYC and several chapters of Jewish Voice for Peace — sent a letter to the New York State comptroller, speaker of the assembly and Senate majority leader, urging them to rescind the New York State Retirement System’s policies that penalize the boycott of Israel. The groups called the anti-boycott provisions an “attack on free speech.”

Ben & Jerry’s independent board of directors reportedly wanted to boycott Israel as well, but Unilever plans to “stay in Israel through a different business arrangement.”

But, they wrote, “the unwavering fight for justice isn’t over … until Ben & Jerry’s ends all business with apartheid Israel.” The groups noted, “The Israeli state can’t be separated from its apartheid and military occupation.”

Marjorie Cohn is professor emerita at Thomas Jefferson School of Law, former president of the National Lawyers Guild, and a member of the bureau of the International Association of Democratic Lawyers and the advisory board of Veterans for Peace. Her books include Drones and Targeted Killing: Legal, Moral, and Geopolitical Issues.

The reality is this: Old-school muckraking and authentic journalism are disappearing every day — and Truthout simply can’t survive without your support. Will you help Truthout keep our platform for independent news alive by making a tax-deductible donation? Donate Now!