Wang fears that millions of “invisible evictions” will occur over the coming months as landlords ratchet up the pressure on tenants, pushing tenants to “self-evict.” 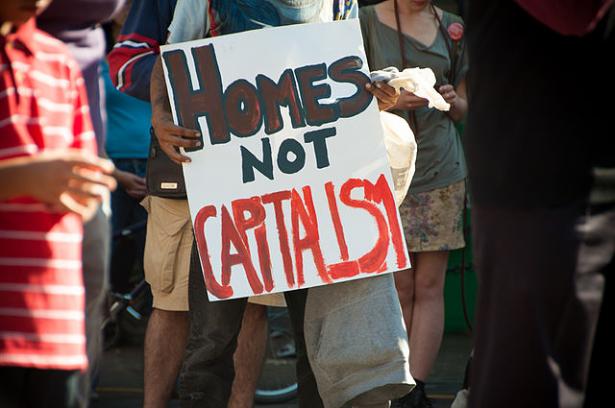 We want no more evictions, no more displacement, and no more gentrification in our neighourhood.,The DTES Power of Women Group is a group of women (we are an inclusive group) from all walks of life who are either on social assistance, working poor, or homeless; but we are all living in extreme poverty in and around the DTES.

UPDATE: After coming under mounting pressure from progressive lawmakers and housing rights activists as the original moratorium expired, the Biden administration announced on Tuesday a temporary and geographically limited moratorium on housing evictions that will last until October 3. According to an order issued by the Centers for Disease Control, the moratorium will apply to counties “experiencing substantial and high” transmission levels of SARS-CoV-2, the virus that causes COVID-19. The CDC cited the rapid spread of the Delta variant of the virus but stands on shaky legal ground. Without an act of Congress, the order could be thrown out in court.

Housing justice organizers are bracing for a wave of evictions after a federal eviction moratorium expired and rent deadlines hit over the weekend, leaving an estimated 15 million people at risk of housing insecurity during a surge in new COVID cases.

A national moratorium on evictions put in place by the Centers for Disease Control and Prevention (CDC) to prevent the spread of COVID-19 was extended multiple times before expiring Saturday night. President Biden sent a last-minute request to Congress last week asking lawmakers to extend the moratorium once more, but House Democrats reportedly failed to muster support for a last-minute push to extend the moratorium before lawmakers began leaving for the August recess. There is even less support for extending the moratorium in the Senate, where Republicans hold 50 seats and can use Senate rules to obstruct legislation.

Rep. Alexandria Ocasio-Cortez and other frustrated progressives argued Democrats had no excuse for failing to use their slim majority in Congress to extend the moratorium. Meanwhile, Democratic leadership demanded the White House take action.

The moratorium did not fully protect tenants from their landlords in the first place, and more than 455,000 evictions occurred across just six states during the pandemic, according to the Eviction Lab at Princeton University. However, the Urban Institute reports that the moratorium also prevented 1.55 million evictions nationwide and undoubtedly saved many lives by helping people stay in their homes as the virus spread.

Now, advocates say the consequences of lifting the moratorium are already being felt across the country as landlords demand another month’s rent — as well as back rent that has built up over the course of the pandemic. Researchers say renters in the United States owe landlords a collective $20 billion after months of economic instability and disruption caused by COVID.

Rep. Cori Bush, a Missouri Democrat who joined protesters and other progressive Congress members of color outside the Capitol Building as the moratorium expired over the weekend, said in a statement on Monday that the nation is now facing an “eviction emergency.” In Bush’s hometown of St. Louis, the local sheriff told the Associated Press that the team in charge of evicting tenants is expanding and will be serving 30 evictions a day starting August 9.

There are evictions happening right now. Our team has heard that there have already been thousands today.

People are being forcibly removed from their homes RIGHT NOW. There are potentially millions more to come.

Has your member of Congress said anything about it?

Against a backdrop of inaction on Capitol Hill, tenant union volunteers and housing justice organizers across the country have been busy helping tenants navigate applications for rental assistance and learn about their rights in case of an eviction. Legal rights for renters and their landlords vary from state to state, as does the scope of the housing crisis that has been complicated by a global pandemic.

Melanie Wang, a national field organizer with Right to the City Alliance, a coalition of local housing justice groups, said many states with low vaccination rates also have few legal protections for renters. Indeed, Princeton’s Eviction lab found that neighborhoods with the lowest vaccination rates in several major cities also had the highest rates of eviction filings in local courts.

Wang fears that millions of “invisible evictions” will occur over the coming months as landlords ratchet up the pressure on tenants, pushing tenants to “self-evict.”

“We’re concerned that tenants across the country are going to start making decisions knowing that they are unprotected [from COVID], putting them at greater risk of getting sick and putting their families in harm’s way due to the economic vulnerabilities that they are going to face,” Wang said in an interview.

Only a handful of states still have their own moratoriums on evictions, including Minnesota, New York, Nevada and Oregon, according to reports. In Massachusetts, the statewide moratorium was lifted back in October 2020. Andrea Park, a staff attorney at the Massachusetts Law Reform Institute, a group providing legal assistance to renters, said about 19,000 petitions for eviction have been filed since.

“We don’t know exactly how many but we believe around 10,000 cases were likely pending when the moratorium went into place, and those resumed in October as well,” Park said in an email. “The end of the CDC order will likely lead to an increase across all types of cases — new cases, pending cases, and tenants hanging on at the end of the process … the execution, which permits physical removal of a tenant.”

However, Wang said organizers are also concerned about what happens to tenants before eviction cases make their way into court. Wang fears that millions of “invisible evictions” will occur over the coming months as landlords ratchet up the pressure on tenants, pushing tenants to “self-evict” to avoid harassment or going to court. Defending against eviction in court requires time and money that many families do not have, Wang said, adding that tenants may also want to avoid landing on “blacklists” kept by landlords. Some tenants may be intimidated by the idea of going to court, while others may face language barriers. All of these factors can be used to pressure people to move out before a formal eviction takes place.

“It’s frightening, it’s emotionally stressful, it’s difficult on families and it’s a long process that requires a lot out of them,” Wang said.

Other tenants may decide to take on unsafe work that increases the risk of COVID infection, or be forced to make tough choices between paying rent and paying for other expenses, such as food and health care. More than 1 in 4 adults reported difficulty paying for basic expenses last month, including 42 percent of Black adults, according to CBPP.

Biden has urged states and cities to use federal pandemic relief funding to provide rental relief for struggling tenants and landlords, and Wang said it’s important that officials work to get the money out there as quickly as possible. However, local organizers have said that states and cities are not using enough discretionary COVID relief funding to support renters, and reports are surfacing about serious problems with state efforts to distribute relief earmarked for renters. In late July, Politico reported that only 6.5 percent of the federal rental aid allocated by Congress had been distributed.

Park said advocates in Massachusetts are pushing for legislation that would require landlords and tenants to apply for rental assistance before an eviction case can be filed in court.

“With the unprecedented amounts of federal rental assistance available right now, we really shouldn’t be letting cases get filed until and unless we know that the money can resolve it,” Park said. “Just a filing creates a permanent record for the tenant that can make it impossible for them to find new housing.”

Wang said that since Biden allowed the eviction moratorium to expire before the relief was distributed, the president’s encouragement to use the funds for rental relief feels like an “empty” gesture. Wang said advocates are calling on both the Biden administration to reinstate the moratorium and for Congress to immediately reconvene and pass protections for renters into law.

“The vast majority of rental relief programs have not been able to distribute all the rent relief at this point,” Wang said. “The fact that the moratorium ended two days ago means that tenants who might have access to rent relief funds in the long run are still going without protection right now … they are being thrown off the cliff without knowing whether there is a net to save them.”

Truthout is a nonprofit, and we rely on donations to keep the lights on and our site online. Whether you’re a longtime supporter or you’re new to our community, if there’s anything you can do to help us raise the $32,000 we need to keep this platform for independent news running, we’d be so grateful for your support. Donate Now
Copyright © Truthout. May not be reprinted without permission.  Reprinted with permission.

Mike Ludwig is a staff reporter at Truthout based in New Orleans. He is also the writer and host of “Climate Front Lines,” a podcast about the people, places and ecosystems on the front lines of the climate crisis. Follow him on Twitter: @ludwig_mike.