The Left Must Demand an End to Vaccine Inequality

Economically prosperous nations routinely base their policy decisions on what is best for international corporations. It will take a concerted, global effort to overcome these structural barriers to vaccine access... 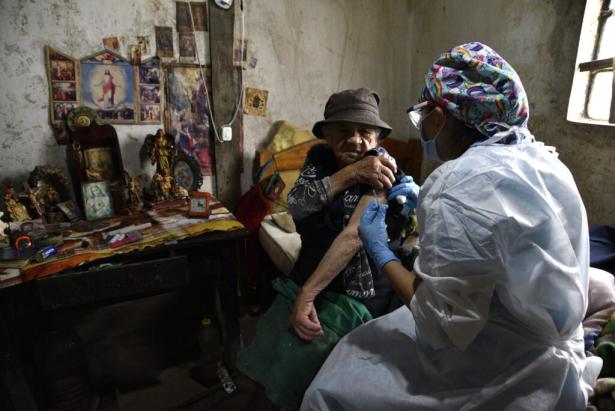 Elizabeth Romero, 32, a nursing assistant, gives a shot of the second dose of the Sinovac COVID-19 vaccine to Dolores Mican, 95, at her house during a door-to-door vaccination day against Covid-19 as part of the campaign to immunize people in rural areas ,of Bogota on July 29, 2021 in Sumapaz, Colombia. Photo by Guillermo Legaria // Rosa Luxemburg Stiftung - New York

Pharmaceutical companies have vehemently opposed patent waivers for decades. Intellectual property forms the basis for Big Pharma’s $700 billion a year industry in the United States. If those protections are weakened, drug companies stand to lose obscene amounts of money. Some companies have threatened to punish countries that support a waiver by withholding shipments of vaccines. Pfizer and Moderna are also attempting to slow-walk a planned vaccine production facility in South Africa that will produce hundreds of millions of doses for the whole continent. It could also eventually be used to produce millions of doses of life-saving HIV, Ebola and cancer drugs, alleviating severe shortages in much of Africa.

The entire global economic system is built around IP restrictions. From computers to media to genetically modified crops, multinational companies guard their intellectual property jealously to protect their own profits. Recently, as the logic of patent hoarding comes into question, business leaders have turn to nationalist arguments to protect their interests. Widespread accusations of China “stealing” US technology helped fuel Trump’s trade war in the second half of his presidency (and a dramatic spike in anti-Asian hate crimes in the last two years), even though efforts to prosecute Chinese-born researchers have failed to demonstrate that widespread theft coordinated from Beijing was taking place. This kind of economic nationalism threatens the ability of major nations to cooperate on key issues such as climate change and a rapid pandemic response.

The Biden Administration took a major step toward global vaccine access in May when his administration pledged to support a Trade-Related Aspects of Intellectual Property Rights (TRIPS) Agreement waiver for the vaccine. Unfortunately, support for the waiver at the WTO must be unanimous. Several European nations, the most notable being Germany, have expressed opposition to such a waiver.

Germany has one of the largest biotech industries in the world, and the conservative Merkel government is politically and ideologically committed to protecting German companies from patent waivers. By doing so, they are putting the needs of domestic industry ahead of ending the pandemic. Merkel’s refusal to support vaccine patent waivers at the WTO could extend the pandemic by years, causing millions more unnecessary deaths and further waves of economic instability around the world.

Fortunately, a global effort to free the vaccine is beginning to emerge, from India and South Africa’s push for vaccine equality to direct actions targeted at key policymakers around the world. Merkel has come under sharp criticism from the German Left for her refusal to support the TRIPS waiver, and socialist politicians in the German Parliament are calling for an end to patent restrictions on the vaccine. Actions in German cities by left-wing organizations have made similar demands.

In the United States, a wave of protests demanding that Germany support the proposed TRIPS waiver took place in multiple cities around the country in mid-July. Spearheaded by the progressive organization Justice is Global, the actions were timed to coincide with German Chancellor Angela Merkel’s visit to the White House at the end of the week. The largest protest took place outside the German consulate in New York City, where hundreds of progressives and activists pressured the German government to put the needs of people everywhere ahead of the greed of pharmaceutical companies.

In my hometown of Chicago, the action took place on the morning of July 13th, as consulate employees were arriving at work. The local chapter of Justice is Global prepared an open letter addressed to Consul General Wolfgang Mössinger in English and German, imploring his consulate and Merkel’s government to support the vaccine waiver. The letter was co-signed by seven progressive organizations based in Chicago, and it was read aloud twice in both languages outside the consulate.

Our protest was not as large as the main action in New York, but we did have the opportunity to interact with an unnamed consulate employee, who assured us that he would deliver our letter to General Consul Mössinger. This cordial encounter reminded us that all peoples around the world have an interest in bringing the pandemic to a swift end, and that progressive organizations in the West have a major role to play in pushing for universal access to life-saving vaccines in the Global South.

Economically prosperous nations routinely base their policy decisions on what is best for international corporations. It will take a concerted, global effort to overcome these structural barriers to vaccine access, all while creating a new infrastructure to vaccinate everyone on Earth quickly and safely. It is essential that the world gets this right. Every vaccine shipment that arrives in hard-hit regions has the potential to save thousands of lives, both by protecting the vulnerable directly and by preventing the emergence of new variants. It is now up to progressives in countries with widespread vaccine access to spearhead the effort to free the vaccine and protect the world.

[Matt Wehmeier is a volunteer organizer with the Chicago-based organization Justice is Global. More of his writing can be found on Medium.]