America’s liberal imperialist doctrine has been responsible for appalling carnage in Vietnam, Iraq, and Central America. America has also produced a liberal anti-imperialist doctrine, ensconced in a TV series that has captivated audiences since 1966 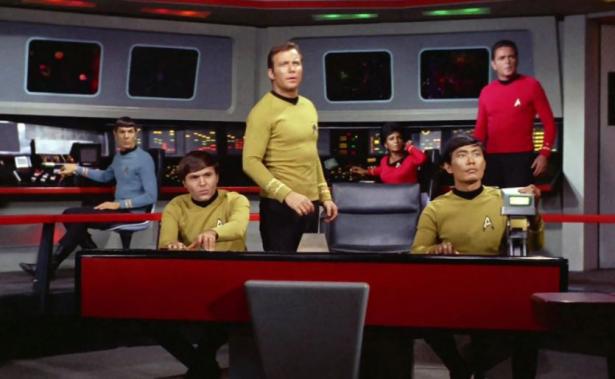 A scene from the third season of “Star Trek.”, Photograph: CBS

ATHENS – On February 9, 1967, hours after the US Air Force pounded Haiphong Harbor and several Vietnamese airfields, NBC television screened a politically momentous episode of Star Trek. Entitled “The Return of the Archons,” the episode marks the debut of the Prime Directive – the supreme law of the fictional United Federation of Planets, and its Starfleet, banning any and all purposeful interference with alien people, civilizations, and cultures. Devised in 1966, as President Lyndon B. Johnson was sending another 100,000 troops into Vietnam, the Prime Directive constituted a direct, though well-camouflaged, ideological challenge to what the US government was up to.

Having remained central to the Star Trek series to this day, the Prime Directive is even more pertinent now. Military escapades always entail a variety of separate issues, making it hard to have a rational debate about their merits. For example, were the US invasions of Vietnam or Afghanistan motivated by good intentions, whether containing totalitarianism or saving women from radical Islamists? Or were those intentions invoked to provide political cover for cynical economic or strategic motives? Were they wrong because the US forces were defeated? Or would they have been wrong even in victory?

The beauty of the Prime Directive is that it cuts through this labyrinth of confusion and deception: the invader’s motives, good or bad, matter not one iota. The Prime Directive bans the deployment of superior technology (military or otherwise) for the purposes of interfering with any community, any people, or any sentient species. It is, in fact, quite drastic: Starfleet personnel must respect it even if it costs them their lives.

In the words of Captain James T. Kirk, “a starship captain’s most solemn oath is that he will give his life, even his entire crew, rather than violate the Prime Directive.” To which his successor, Captain Jean-Luc Picard, adds: “The Prime Directive is not just a set of rules; it is a philosophy … and a very correct one. History has proven again and again that whenever mankind interferes … no matter how well-intentioned that interference may be, the results are invariably disastrous.”

Entrenching such a philosophy in a mainstream American TV series, and in the midst of the biggest escalation of the Vietnam War, was a bold move. There can be little doubt that it was an intentional critique of US foreign policy. In the episode “Patterns of Force” (1968), Star Trek’s screenwriters conjured up a Federation social engineer who tries to help a primitive planet develop by instilling in its people a humanist attitude while also building a state with the efficiency that only an authoritarian regime can muster. His well-meaning intervention soon unravels as the patterns of authority he introduced beget institutionalized racism, and the humanism he tries to nurture is crushed by a regime espousing genocide.

Star Trek’s writers were not naive moralists or isolationists. They understood that, as with all rigid moral imperatives, their Prime Directive could not be applied straightforwardly. Simply turning up in a foreign land, or on another planet, meant interfering in some way. Although Starfleet officers are shown prepared to die rather than violate the Prime Directive, in plenty of situations their moral outrage causes them to bend or even ignore it. In “A Private Little War” (1968), they encounter a planetary civil war where one of the two factions has been supplied with advanced weapons by the Federation’s arch foe, the Klingons. How could they respect the Prime Directive when the competing superpower is not?

Deciding that the best way to respect the Prime Directive is to violate it, they attempt to level the battlefield by providing almost identical weapons to the other faction. The result is an out-of-control arms race and a rare unhappy ending.

But not all violations of the Prime Directive lead to disaster. “A Taste of Armageddon” (1967) depicts a bizarre war between two planets whose leaders had agreed to simulate their battles on a computer in order to stop the endless destruction of infrastructure. But the people “killed” in the computer simulation are later taken to death chambers. Convinced that risking a return to full-blown war is preferable to letting the callous simulated-cum-actual killings continue, Kirk violates the Prime Directive by blowing up the death chambers.

Nonetheless, the screenwriters went to great lengths in such cases to show that good consequences resulted despite violations of the Prime Directive, not because of them. Or, more precisely, it is the belief, etched into the minds and souls of Starfleet personnel, that the Prime Directive is good and proper which makes it possible for violations of it sometimes to work out. Likewise, Western soldiers can occasionally do good in some far-flung war-torn country precisely because they do not believe it is sensible to try to build a coherent civilization at the barrel of a foreign gun.

Star Trek’s Prime Directive deploys popular culture to highlight the irrelevance of whether the stated good intentions used to justify imperialist escapades are real or bogus. It dramatizes brilliantly the manner in which top-down high-tech invasions planned in advance to save an “inferior” people from themselves can only lead inexorably to the nauseating lies, crimes, and cover-ups of the sort we encounter in the Pentagon Papers or Wikileaks.

The Prime Directive is also a necessary and useful reminder of the contradictions of American society – in particular, how it has produced not only the liberal imperialist doctrine responsible for so much carnage in places like Vietnam, Iraq, and Afghanistan, but also a liberal anti-imperialist doctrine which remains ensconced in a TV series that has been captivating US audiences for longer than most Americans have been alive.

[Yanis Varoufakis, who resigned as Finance Minister for Greece's Syriza-led government on Monday, July 6, 2015, is the author of The Global Minotaur and a visiting professor at the University of Texas at Austin.]

For more than 25 years, Project Syndicate has been guided by a simple credo: All people deserve access to a broad range of views by the world's foremost leaders and thinkers on the issues, events, and forces shaping their lives. At a time of unprecedented uncertainty, that mission is more important than ever – and we remain committed to fulfilling it.

But there is no doubt that we, like so many other media organizations nowadays, are under growing strain. If you are in a position to support us, please subscribe now.