This Powerful Democrat Linked to Fossil Fuels Will Craft the U.S. Climate Plan

Senator Joe Manchin is already a crucial swing vote in the Democrats’ sweeping budget bill. But he will also write the details of its climate change program 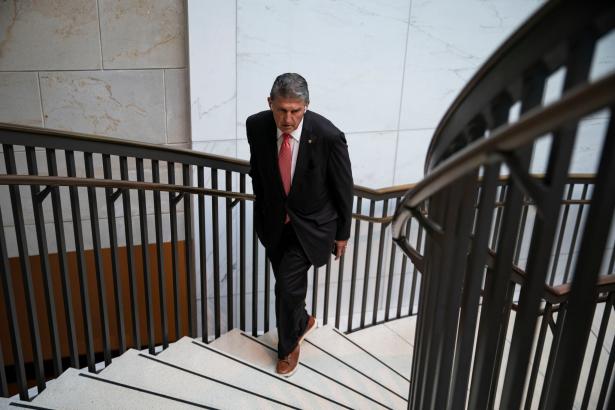 Senator Joe Manchin, Democrat of West Virginia, represents a state that is second in coal and seventh in natural gas production, and personally profits from stock he owns in his family’s coal brokerage., Al Drago for The New York Times

WASHINGTON — Joe Manchin, the powerful West Virginia Democrat who chairs the Senate energy panel and earned half a million dollars last year from coal production, is preparing to remake President Biden’s climate legislation in a way that tosses a lifeline to the fossil fuel industry — despite urgent calls from scientists that countries need to quickly pivot away from coal, gas and oil to avoid a climate catastrophe.

Mr. Manchin has already emerged as the crucial up-or-down vote in a sharply divided Senate when it comes to Mr. Biden’s push to pass a $3.5 trillion budget bill that could reshape the nation’s social welfare network. But Mr. Biden also wants the bill to include an aggressive climate policy that would compel utilities to stop burning fossil fuels and switch to wind, solar or nuclear energy, sources that do not emit the greenhouse gases that are heating the planet.

As chairman of the Senate Committee on Energy and Natural Resources, Mr. Manchin holds the pen and the gavel of the congressional panel, with the authority to shape Mr. Biden’s ambitions.

But Mr. Manchin is also closely associated with the fossil fuel industry. His beloved West Virginia is second in coal and seventh in natural gas production among the 50 states. In the current election cycle, Mr. Manchin has received more campaign donations from the oil, coal and gas industries than any other senator, according to data compiled by OpenSecrets, a research organization that tracks political spending.

He profits personally from polluting industries: He owns stock valued at between $1 million and $5 million in Enersystems Inc., a coal brokerage firm which he founded in 1988. He gave control of the firm to his son, Joseph, after he was elected West Virginia secretary of state in 2000. Last year, Mr. Manchin made $491,949 in dividends from his Enersystems stock, according to his Senate financial disclosure report.

“It says something fascinating about our politics that we’re going to have a representative of fossil fuel interests crafting the policy that reduces our emissions from fossil fuels,” said Joseph Aldy, who helped craft former President Barack Obama’s climate change bill and now teaches at Harvard.

Mr. Manchin’s spokeswoman, Sam Runyon, wrote in a statement that the senator “is in full compliance with Senate ethics and financial disclosure rules. He continues to work to find a path forward on important climate legislation that maintains American leadership in energy innovation and critical energy reliability.” She noted that Mr. Manchin had helped shape recent legislation that included some climate provisions, including the bipartisan infrastructure bill that passed the Senate last month. 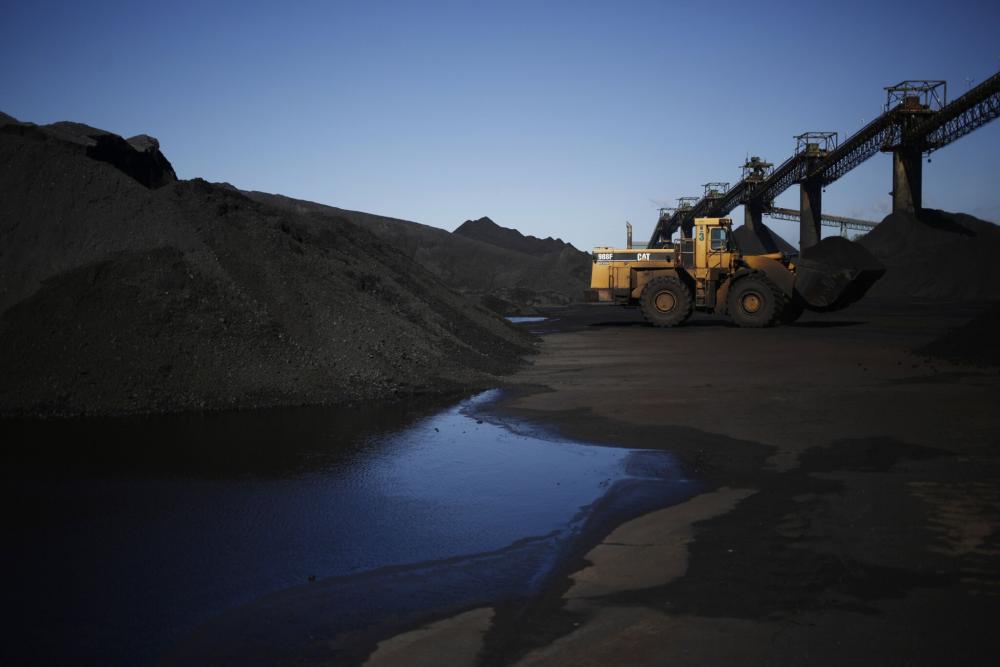 During his 2010 Senate campaign, Mr. Manchin famously appeared in a television ad in which he used a shotgun to put a bullet hole through Mr. Obama’s climate plan, “‘cause it’s bad for West Virginia,” he said. More recently, Mr. Manchin has publicly acknowledged the contribution of fossil fuel pollution to rising global temperatures.

“There is no question that climate change is real or that human activities are driving much of it,” he co-wrote in a 2019 opinion article in the Washington Post with Senator Lisa Murkowski, Republican of Alaska.

But Mr. Manchin has also made clear that he does not support legislation that would eliminate the burning of those fossil fuels — particularly coal and natural gas.

Now, Mr. Manchin is preparing to write the climate portion of the budget bill in a way that would keep natural gas flowing to power plants, according to people familiar with his thinking. The sources spoke on the condition of anonymity because they were not authorized to publicly discuss it.

Mr. Manchin does support some climate measures proposed by Mr. Biden, but is working to ensure they protect and extend the use of coal and natural gas. He agrees with the president that communities dependent on fossil fuels deserve financial support as the country transitions to green energy. And he is a booster of carbon capture sequestration, a nascent technology that collects carbon emissions from smokestacks and buries them in the ground. If it were to become commercially viable, that technology could allow industries to continue to burn coal, oil and gas.

But the most powerful climate mechanism in the budget bill — and the one that Mr. Manchin intends to reshape — is a $150 billion program designed to replace most of the nation’s coal- and gas-fired power plants with wind, solar and nuclear power over the next decade. Known as the Clean Electricity Performance Program, it would pay utilities to ratchet up the amount of power they produce from zero-emissions sources, and fine those that don’t. 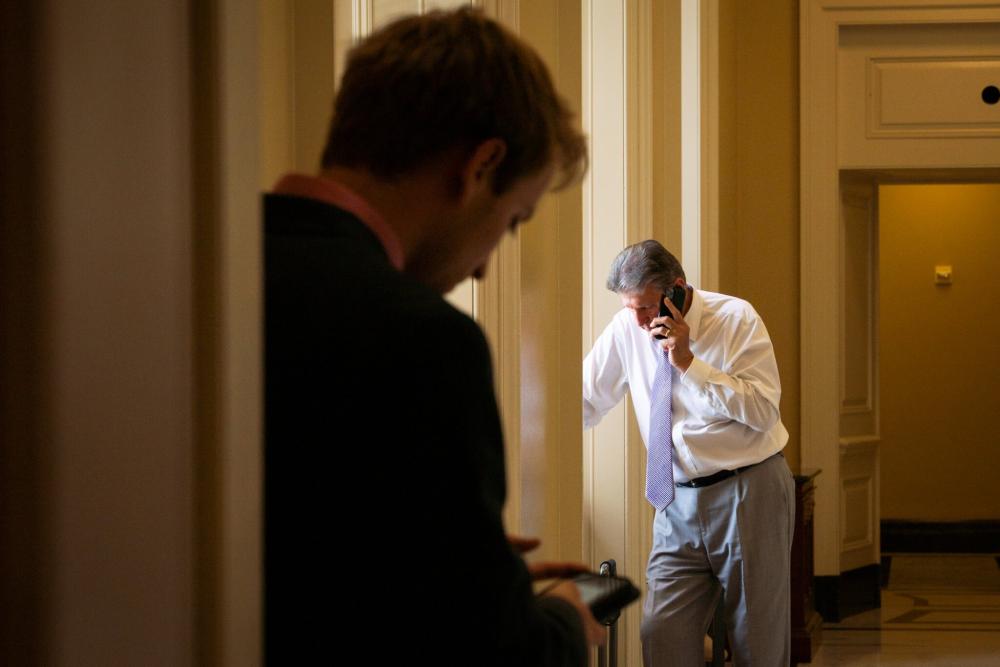 As envisioned by the White House and House Democrats, the carrot-and-stick approach could transform the nation’s electricity sector, the second-largest source of greenhouse pollution after transportation. The policy is crucial to Mr. Biden’s goal of producing 80 percent of electricity from zero-carbon sources by 2030 and 100 percent clean electricity by 2035, analysts say. It could also help lower pollution from automobiles since electric cars and trucks would be drawing power from a grid powered by clean energy.

“This policy is an essential foundation for rapidly reducing emissions in the most polluting sectors of the economy,” said Richard Newell, president of Resources for the Future, a nonpartisan energy and environment research organization.

Mr. Manchin’s version is widely expected to have less ambitious renewable energy requirements for electric power companies. His version could also reward utilities that build new power plants designed to burn natural gas. While it emits about half the carbon dioxide of coal, natural gas is still a major contributor to global warming.

Fossil fuel lobbyists, utility executives and West Virginia business leaders have been meeting, calling and emailing Mr. Manchin and his staff in an effort to shape the bill.

Several said in recent interviews that they expect that Mr. Manchin’s plan will reward companies that increase their supply of clean energy — but the incentives will be smaller and require less. Under the version supported by the White House and House Democrats, companies would qualify for payments if they increase the amount of clean electricity they supply to customers by 4 percent a year through 2030. Mr. Manchin is likely to lower that requirement to 3 percent a year or less, said two people familiar with the matter.

That would still be an improvement over business as usual: American electric utilities increased their use of zero-carbon power sources by roughly 1.4 percentage points a year over the last five years. That use increased about 2.3 percentage points in 2020.

“While this will fall far short of what President Biden wants, it could still be the largest action Congress has ever taken on climate change,” Mr. Aldy, the former Obama climate adviser, said.

Mr. Manchin is also weighing a provision that would pay utilities not just for using more clean energy but for switching from coal — an industry that is already collapsing — to natural gas. The incentives for using natural gas would be smaller but designed to keep the industry afloat. 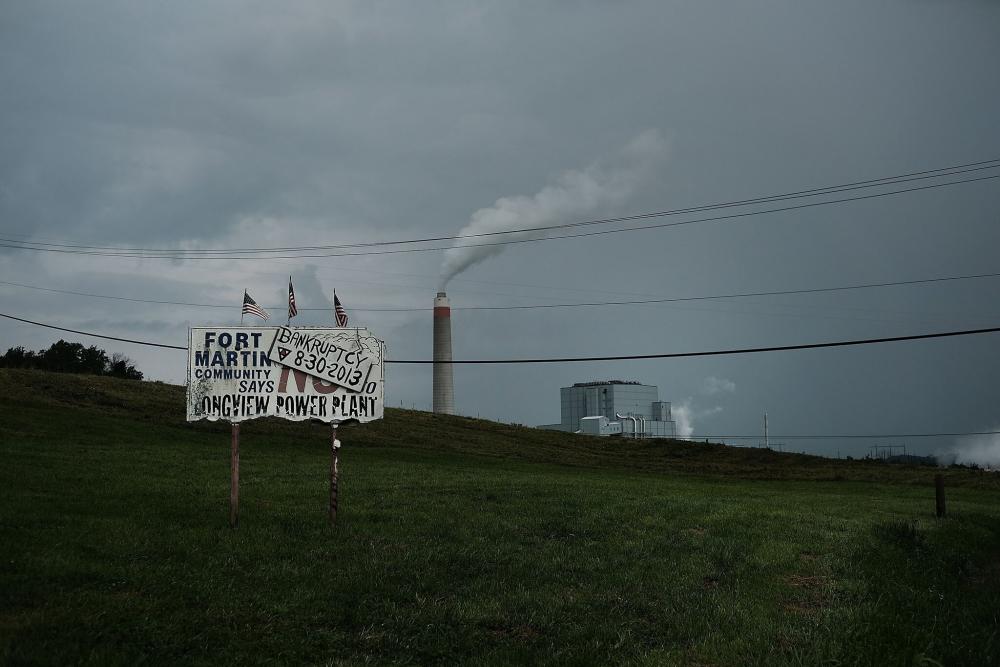 Among the industry executives to whom Mr. Manchin is listening closely is Nick Akins, the head of American Electric Power, an Ohio-based electric utility that serves 11 states, including West Virginia, and relies on West Virginia coal for many of its power plants.

The two men have a long working relationship and spoke earlier this month — each man has the other’s cellphone number.

Mr. Akins said he would like Mr. Manchin to slow the pace at which electric utilities are required to migrate from dirty to clean fuels, and eliminate fines against power companies that fail to switch to clean electricity sources. 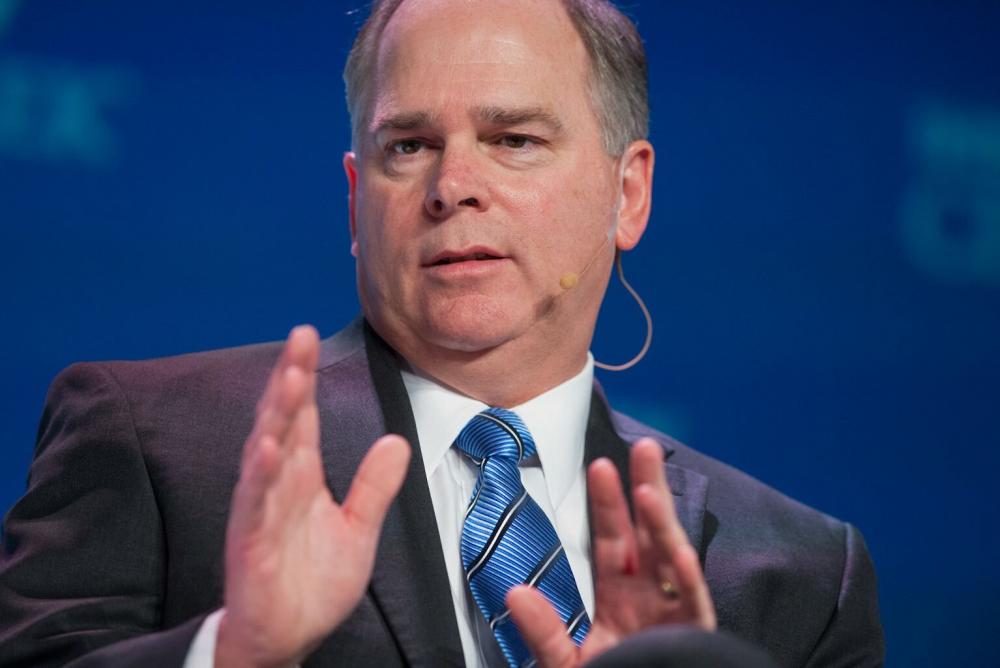 “He is supportive of a clean energy future, like we all are,” Mr. Akins said. “But these transitions take time. We can’t cram all that into eight years,” he said, referring to Mr. Biden’s goal of 80 percent clean power by 2030.

“And I don’t like the penalty — we already have all the impetus in the world to continue to this clean energy transition,” Mr. Akins added.

Mr. Aldy said removing fines would drastically weaken the bill. “The penalty on pollution is really important,” he said. “All the analyses show that you get big reductions in carbon emissions if you have a penalty on polluting. Take that away, and all you have is another government subsidy for renewable energy.”

Mr. Manchin is also listening closely to his constituents. Earlier this month, the senator spent two days at the annual meeting of the West Virginia Chamber of Commerce, convened at the lavish Greenbrier resort, where “people were lining up to talk to him about this,” said Steve Roberts, president of the West Virginia Chamber of Commerce and another old friend of Mr. Manchin’s. “This is something that has been talked about in West Virginia business circles probably every day within the last two or three weeks.”

Those conversations didn’t challenge the reality of climate change or whether the government should act to combat it, Mr. Roberts said. The main theme was “slow down,” he said.

“It wouldn’t offend me at all if you said, ‘Yes, it’s getting hotter and people need to run their air conditioning more.’ And Joe Manchin feels the same way,” Mr. Roberts said.

“But we think we have to be realistic about the elimination of carbon emissions,” he continued. “We’re not really sure that the combination of demand and physics with world market issues will mean that we can go to zero emissions from electricity by 2035, like President Biden wants.”

In May, the world’s leading energy agency said nations must immediately stop approving new coal-fired power plants and new oil and gas fields, and quickly phase out gasoline-powered vehicles to avert the most catastrophic effects of climate change. Scientists have said the world needs to keep the increase in average global temperatures below 2 degrees Celsius, compared to preindustrial levels, or risk irreversible damage. The planet has already warmed by about 1.1 degrees Celsius. On Friday, the United Nations Secretary General António Guterres said “the world is on a catastrophic pathway.”

Environmentalists and progressives are demanding urgent federal action and are concerned that Democrats have only a short window before the 2022 elections when they could lose control of Congress.

“This is not the time to water down the biggest driver of reducing climate pollution,” said Tiernan Sittenfeld, a senior vice president at the League of Conservation Voters. “We are absolutely out of time when it comes to dealing with the climate crisis.”

The proposals now being weighed by Mr. Manchin “would keep fossil fuels as a major engine of the economy for longer than the climate can bear it,” said Michael Oppenheimer, a professor of geosciences at Princeton University.

Coral Davenport covers energy and environmental policy for the climate desk from Washington. She was part of the Times team that received Columbia University’s John B. Oakes award for distinguished environmental journalism in 2018. @CoralMDavenport