Workers were locked out Thursday night and had to wait for hours to get their personal belongings. On Friday, they were let in — but an armed security guard was there. 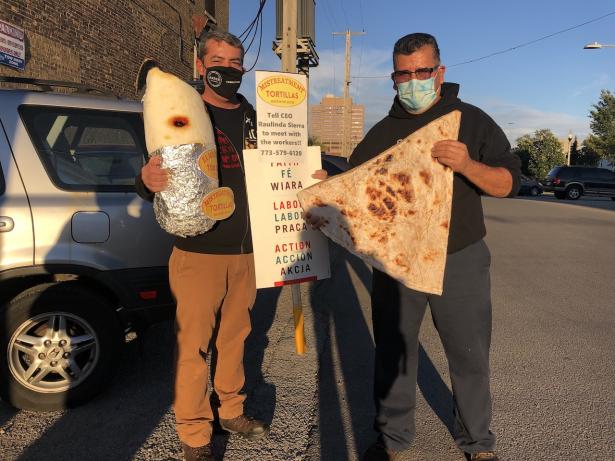 Two workers from the 31st Street El Milagro Factory hold up a giant burrito and a giant tortilla with a sign that reads "Mistreatment Tortillas" at the walkout on 26th Street., Francesca Mathewes/Block Club Chicago

The employees at El Milagro tortilla factory partnered with Arise Chicago to stage a two-hour walkout at 2140 S. Western Ave. as they call for safer working conditions and higher wages. But they were locked out with their belongings inside, and they were only allowed to collect their personal items after hours of negotiations with the factory’s leaders.

Workers were allowed back in Friday morning to work, but an armed security guard was present.

The walkout had been planned beforehand. Workers informed management they would leave the factory at 5 p.m. Thursday and return after two hours. They released a letter prior to the march, asking for management to meet with employees to talk about working conditions and wages by Wednesday.

But when the workers tried to return to their shifts, they were locked out of the factory — with many personal items, including cary keys, wallets and medicine, locked inside.

A notice taped to the door instructed workers to report to Human Resources on Friday.

Leaders from Arise Chicago, which is helping the workers organize, were present. They told workers what was happening was illegal and began contacting the factory’s management. 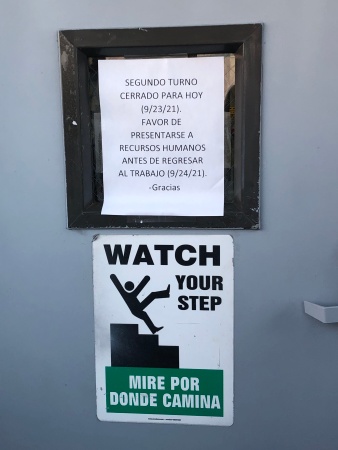 “We’re going to report this to the National Labor Relations Board,” Jorge Mújica, the strategic campaigns organizer for Arise, said while gathering workers at the entrance of the factory.

It appeared there was one supervisor inside, but he refused to speak with organizers.

Irma Gonzales, who has worked for El Milagro for more than five years, is pregnant and had medication she needed inside the factory.

“I’m really bothered. I’m really upset,” Gonzales said in Spanish. “We submitted a letter saying exactly what we’re doing, which we have a right to do. We said we’d be taking a two-hour stoppage.

“We said we would be returning to work and we got back in time, but they’ve locked the door on us. I’m really upset.”

Garza called the Police Department to the factory to report the lockout. Two officers arrived and tried to negotiate with a supervisor inside, eventually calling in three more officers.

After negotiations between organizers, police and management, the supervisor allowed officers to escort employees one by one to get their personal items.

Employees and organizers waited outside the factory parking lot for the 10 p.m. cleaning shift to arrive to inform them of the lockout. Those workers then joined the walkout, organizers said.

“We need a change in general in our working conditions,” Pedro Manzanares, who works at another El Milagro factory, said in Spanish. Manzanares joined the 21st Place workers outside that factory in support.

Manzanares said that during the summer, temperatures in the factories were dangerously high.

“One of the principle issues is the heat: We work in excess heat in the production area,” he said.

Pay raises are one of the other major issues that workers and organizers are raising with the tortilla company.

Mújica said El Milagro started advertising wages of $16 per hour for new hires earlier this summer, while workers who have been with the company for years are still making $15.40. Workers at the 36th Street location signed a letter demanding a pay raise for more senior employees, which was met by management.

But when workers at the 21st and 26th Street locations asked for the same, they were denied, Mújica said.

“Management then hired a consultant; we call them union busters,” Mújica said. “He told workers that there would be ‘consequences’” for organizing and people who walk out will be replaced.

Arise Chicago started working with employees at El Milagro during the pandemic, when the company closed its location at 2919 S. Western Ave. in April 2020 after a worker died of COVID-19. By September 2020, more than 80 workers had tested positive for COVID-19.

Mújica said that the group’s partnership with the workers at El Milagro is now in the “middle stages” of organizing, and they will have more information after Wednesday’s management meeting deadline passes.

“We know a lot of people were scared to come out and still did, and we know this is going to keep growing,” Manzanares said.

Manzanares said that if management does not meet the Wednesday deadline, workers will take further action.

#ElMilagro worker Martin “I was able to go I to work today. 1st shift workers wanted to walk out to support the locked out 2nd shift. We were greeted by a security officer with a gun intimidating us” #ElMilagroElMaltraro pic.twitter.com/ZyXh7JmEWU