October 1, 2021 Michael Sainato The Guardian
Printer friendly
Wave of US Labor Unrest Could See Tens of Thousands on Strike Within Weeks Published October 1, 2021 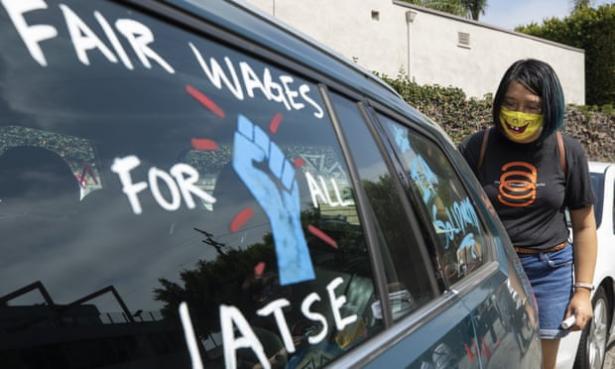 Tens of thousands of workers around the US could go on strike in the coming weeks in what would be the largest wave of labor unrest since a series of teacher strikes in 2018 and 2019, which won major victories and gave the American labor movement a significant boost.

The unrest spans a huge range of industries from healthcare to Hollywood and academia, and is largely focused on higher wages, fighting cuts and better working and safety conditions, especially in light of Covid-19.

It also plays out against a backdrop of an economy bouncing back from the torrid experience of widespread economic shutdowns during the coronavirus pandemic, but one that is still marked by profound inequality.

However, the pandemic is also seen as potentially providing a shot in the arm for US labor unions by increasing bargaining power amid increased union drives and labor shortages in some industries.

About 24,000 nurses and other healthcare workers at Kaiser Permanente in California represented by the United Nurses Associations of California/Union of Health Care Professionals will vote on a strike authorization from 1 to 10 October. The union took issue with Kaiser Permanente’s 1% wage increase for workers, cuts to wages for new staff, and benefit cuts in the company’s most recent offer.

“We have people burned out, complaining of mental health issues and PTSD. We’re in a situation as a union where we’re concerned about the future of nursing, [and] how we recruit and retain nurses and other healthcare professionals,” said Denise Duncan, president of UNAC/UHCP and a registered nurse.

About 700 building engineers at Kaiser Permanente in the San Francisco area are already on strike.

In an emailed statement, Kaiser Permanente’s senior vice-president of human resources, Arlene Peasnall, said: “Kaiser Permanente’s Labor Management Partnership was created 24 years ago, and has a great track record of serving as the framework through which we can solve sometimes very difficult problems. Instead of abandoning it, in the spirit of the partnership we ask union leaders to continue to work constructively toward an agreement, rather than call on nurses and other employees to walk away from patients who need them during this pandemic.”

After four months of negotiations with the Alliance of Motion Picture and Television Producers (AMPTP), the International Alliance of Theatrical Stage Employees (IATSE)announced a strike authorization vote for 60,000 workers across the film and television industry in the US. If the union moves forward with the strike, it would be the first among Hollywood production workers since the second world war.

Hollywood workers have reported long workdays and unsafe schedules that have worsened during the pandemic. Pay rates for many workers have remained low, at just above the minimum wage in the Los Angeles area, while streaming services and shorter television series have also depressed wages.

“They wouldn’t have much to film if we weren’t here building everything for them,” said Joe Martinez, a IATSE Local 44 member and special effects technician. “They need to start looking at it from a perspective of what would happen if we weren’t there. And then it changes the whole dynamics, because there’s no way they would ever have a central product if we weren’t there.”

Several other large groups of workers have voted to authorize strikes around the US while continuing new union contract negotiations, such as 2,000 Frontier Communications workers in California, transit workers in Beaumont, Texas, and Akron, Ohio, about 450 public works employees in Minneapolis, Minnesota, dining workers at Northwestern University, and hundreds of group home workers in Connecticut.

On 12 September, 10,100 John Deere production and warehouse workers in Iowa, Illinois and Kansas, represented by nine locals with the United Auto Workers voted 99% in favor of a strike authorization if a new six-year union contract isn’t attained through negotiations with the company.

After the strike vote, some union members held a protest outside John Deere headquarters in Moline, Illinois, over the company’s first contract offer.

According to workers at the strike authorization meetings, John Deere’s first contract offer included increases in healthcare costs, including premiums and deductibles, the end of a no plant closure commitment in the union contract agreement, and reducing eligibility for overtime after eight hours a day to only after exceeding 40 hours in a week. The current union contract expires on 1 October.

“The initial offer is really a slap in the face,” said Chris Larsen, a member of UAW Local 74 in Ottumwa, Iowa, who has worked at John Deere for 19 years. “There are a lot of dissatisfied people.”

John Deere has reported record profits in 2021, breaking their annual profit record in the first nine months of this year with new earnings records set each quarter in 2021 so far. The company reported a net income of $4.7bn on 2 August, compared with their previous record profit year in 2013 where the annual net income was reported at $3.5bn.

A spokesperson for John Deere declined to comment on the initial offer.

Elsewhere 2,500 nurses and other hospital staff represented by the Communications Workers of America are fighting for a new union contract with Catholic Health at three hospitals in the Buffalo, New York, area. At Catholic Health’s Mercy hospital 2,000 workers voted 97% in favor of authorizing a strike to start on 1 October, when their current contract expires.

Tina Knop, a nurse at Mercy hospital, argued unsafe staffing ratios, lack of support staff and supply shortages have worsened working conditions through the pandemic, and made it more difficult to adequately care for patients.

“What we’re fighting for is to have better staffing and Catholic Health to come forward and work harder to actually staff their facilities,” said Knop. “They’re not providing us with support, emotionally or physically, and all they want to do is cut our pay, take away the pension targets, and charge more for our health insurance.”

Cheryl Darling, an immediate treatment assistant at Mercy hospital, recently tested positive for Covid-19 though she is vaccinated, but only found out from a rapid test she took before visiting her mother at a local nursing home. She described chaotic working conditions at the hospital due to staffing shortages from housekeepers to nurses, leaving workers struggling to keep up with the workloads.

In a statement, Catholic Health’s president, Eddie Bratko, said: “I want to assure our community that our top priority is the welfare and safety of our patients, and our hospital will remain open and operational during a strike to continue providing safe, high quality care.”