That North Carolina has failed its labor force so comprehensively ever since the 1930s is a stain on our state’s moral character. As Robert Reich has observed, what is the point in having an economy unless most people benefit from it? 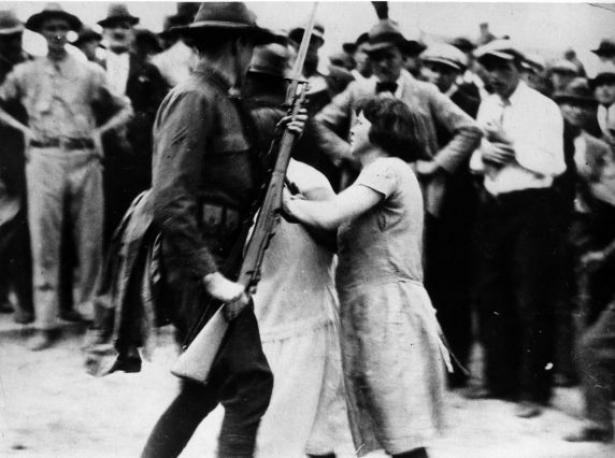 At the height of his cultural influence, Woody Guthrie took an interest in a tiny North Carolina mountain town. In his ballad “The Marion Massacre,” Guthrie sang, “‘Twas in Marion, North Carolina, in a little mountain town; six workers of the textile, in cold blood were shot down.” The inspiration for this song was a massacre in which McDowell County Sheriff’s deputies gunned down six striking workers, none of whom posed a threat to the officers. In going on strike against abusive labor practices, the workers had signed their own death warrants.

The 1930s were the apex of labor violence in North Carolina. In Gastonia, a young mother of five was shot dead for participating in a textile strike. In High Point, Governor O. Max Gardner deployed the National Guard to break a strike that was a major inconvenience to big business interests that enjoyed cheap and disposable labor. As late as the 1950s, North Carolina was still the least unionized state in the nation. It speaks to the decline of American organized labor that our state’s unionization rate in the 1950s, about 9%, was higher than the national unionization rate today. North Carolina’s rate of union membership today is just below 3%.

Perhaps that’s why the international NGO Oxfam recently called North Carolina the “worst state in the nation” for working people. Taking into account wages, working conditions and other indicators, Oxfam damned North Carolina as a working person’s hell. The response from our state’s Republican leadership was silence. After all, even the elected Labor Commissioner, Josh Dobson, has spoken to Art Pope’s John Locke Foundation about his robust support for “right-to-work” laws and strong opposition to collective bargaining rights for state employees. Out of the 50 states, only North Carolina and Virginia forbid their state employees from organizing.

North Carolina has managed to grow in spite of being arguably the most anti-labor state in the country. But that is primarily because housing is cheaper here than in coastal states like New York. Don’t let that fool you into thinking low wages are inevitable: workers in union states make an average of $2,000 more per year than workers in so-called “right to work” states, even after accounting for cost of living. Workers with a union wind up with more money in their pocket, even before accounting for better working conditions and negotiated benefits like healthcare and retirement. According to a recent Gallup poll, 86% of all union members approve of their union, and their approval has not dropped below 75% since 2001. As a recent policy brief on hourly workers from the organization Carolina Forward noted, “we live in an era of increasing corporate power over the American economy, our society and its politics … empowering workers through union-based collective bargaining would be a powerful corrective step returning some power to working people.” This is right, and it is also obvious.

That North Carolina has failed its labor force so comprehensively ever since the 1930s is a stain on our state’s moral character. As Robert Reich has observed, what is the point in having an economy unless most people benefit from it? In our unequal and underpaid state, the gains from economic growth go mainly to the owners of capital, instead of the people whose labor creates it. Leaders from the right-wing North Carolina Chamber of Commerce, and their man at the Labor Commissioner’s office, seem content with a state that has little regard for the people who make it run. And they’re hoping that workers don’t realize the raw deal they’re getting.

Alexander H. Jones is a policy analyst with Carolina Forward. He lives in Chapel Hill.