People sometimes describe the Arizona senator as a centrist, that seems the wrong term for someone who’s working to derail some of the most broadly popular parts of Biden’s agenda, corporate tax increases and reforms to lower prescription drug prices 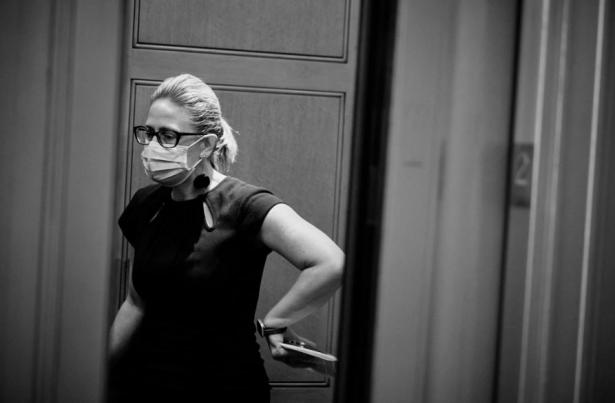 In 2003, Joe Lieberman, at the time one of the worst Democratic senators, traveled to Arizona to campaign for his party’s presidential nomination and was regularly greeted by antiwar demonstrators. “He’s a shame to Democrats,” said the organizer of a protest outside a Tucson hotel, a left-wing social worker named Kyrsten Sinema. “I don’t even know why he’s running. He seems to want to get Republicans voting for him — what kind of strategy is that?”

It was a good question, and one that many people would like to ask Sinema herself these days. People sometimes describe the Arizona senator as a centrist, but that seems the wrong term for someone who’s been working to derail some of the most broadly popular parts of Joe Biden’s agenda, corporate tax increases and reforms to lower prescription drug prices. Instead, she’s just acting as an obstructionist, seeming to bask in the approbation of Republicans who will probably never vote for her.

A “Saturday Night Live” skit this weekend captured her absurdist approach to negotiating the reconciliation bill that contains almost the entirety of Biden’s agenda. “What do I want from this bill?” asked the actress playing Sinema. “I’ll never tell.” It sometimes seems as if what Sinema wants is for people to sit around wondering what Sinema wants.

When Sinema ran for Senate, the former left-wing firebrand reportedly told her advisers that she hoped to be the next John McCain, an independent force willing to buck her own party. Voting against a $15 minimum wage this year, she gave a thumbs down — accompanied by an obnoxious little curtsy — that seemed meant to recall the gesture McCain made when he voted against repealing key measures of the Affordable Care Act in 2017.

But people admired McCain because they felt he embodied a consistent set of values, a straight-talking Captain America kind of patriotism. Despite his iconoclastic image, he was mostly a deeply conservative Republican; as CNN’s Harry Enten points out, on votes where the parties were split, he sided with his party about 90 percent of the time.

Sinema, by contrast, breaks with her fellow Democrats much more often. There hasn’t been a year since she entered Congress, Enten wrote, when she’s voted with her party more than 75 percent of the time. But what really makes her different from McCain is that nobody seems to know what she stands for.

“We need to make health care more affordable, lower prescription drug prices, and fix the problems in the system — not go back to letting insurance companies call all the shots,” she tweeted in 2018. Yet Sinema reportedly objects to the Democrats’ plan to allow the federal government to negotiate drug prices for Medicare recipients and even opposes a scaled-back version of the policy put forward by some House moderates. She voted against the Trump tax cuts in the House but now seems to oppose undoing any of them. According to The New York Times, she’s “privately told colleagues she will not accept any corporate or income tax rate increases.”

Why? An easy explanation would be money; she could just be protecting her campaign donors. But as Matthew Yglesias points out, in recent cycles small-dollar Democratic donors, who tend to be to the left of Democratic voters overall, have showered the party’s Senate candidates with cash. If Sinema tanks the Biden presidency, it’s unlikely to be great for her fund-raising.

So I think it’s entirely possible that Sinema’s motives are sincere, because she’s come to believe in bipartisanship for its own sake, divorced from any underlying policy goals. To understand why, it’s worth reading Sinema’s one book-length explication of her political philosophy, her 2009 “Unite and Conquer: How to Build Coalitions That Win — and Last.”

In “Unite and Conquer,” Sinema describes entering the Republican-controlled Arizona State House as a strident progressive, accomplishing nothing, being miserable and then recalibrating so that she could collaborate with her Republican colleagues. The book is vaguely New Agey. It places a lot of emphasis on deep breathing and extols what Sinema calls “Enso politics,” after a Zen term for a circle symbolizing enlightenment.

Sinema describes finding self-actualization in learning to “open up my own ways of thinking to embrace a much larger possibility than the strict party-line rhetoric I’d been using.” She figured out how to have meetings with lobbyists that were “relaxed and comfortable,” whether or not they agreed. Her “new ethos” helped her to get more done and, “perhaps most importantly,” be “much happier,” she writes.

“Unite and Conquer” was about operating in the minority, not exercising power. Now that she’s part of a governing majority, Sinema is, ironically, recapitulating some of the pathologies she boasted about transcending. Rather than being part of a productive coalition, she’s once again operating as a defiantly contrary outsider. The bipartisanship that was once a source of liberation for her seems to have become a rigid identity.

“I think she’s just really invested in that self-image, personally, as someone who stands up to her party, and I think she has really lost track of what is actually politically prudent, even to put aside the impact on the lives of millions of people,” said Emily Kirkland, executive director of Progress Arizona, a progressive group that worked to elect Sinema to the Senate. There’s a difference, it turns out, between being a maverick and being a narcissist.

[Michelle Goldberg has been a New York Times Opinion columnist since 2017. She is the author of several books about politics, religion and women’s rights, and was part of a team that won a Pulitzer Prize for public service in 2018 for reporting on workplace sexual harassment issues. @michelleinbklyn ]