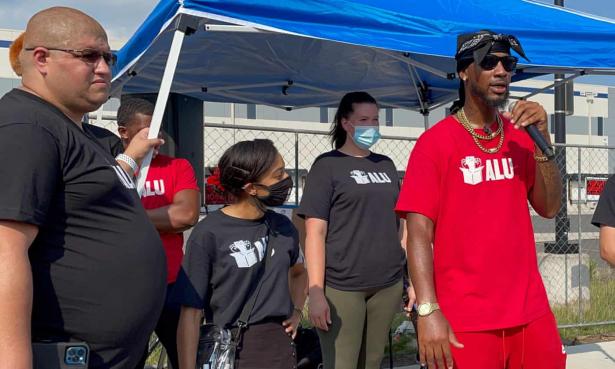 Chris Smalls outside the warehouse in Staten Island. He said: ‘The energy and culture we built over the last six months with these workers, it’s been very strong.’,Photograph: MediaPunch/Rex/Shutterstock

Amazon workers plan to file for a union election with the National Labor Relations Board next Monday, after months of organizing and collecting over 2,000 union authorization cards from employees at a warehouse in New York City.

The move will be the latest bid to organize a union at Amazon – which has opposed unionization of its huge workforce – by a labor movement seeking to flex its muscles as the US economy emerges from the pandemic.

The Amazon Labor Union is seeking to create an independent union of Amazon workers and has raised over $20,000 through GoFundMe to support the organizing efforts over the past six months. The election covers the sprawling Amazon JFK8 warehouse on Staten Island and surrounding facilities dubbed LDJ5, DYY6 and DYX2.

Through the group’s organizing efforts outside of JFK8, Amazon has reportedly distributed and posted anti-union flyers, installed a chain fence with barbed wire between the parking lot and the bus stop where organizers set up, and confiscated union literature.

Chris Smalls, a former worker at JFK8 in Staten Island and recently elected president of the Amazon Labor Union, was fired from the warehouse in March last year after organizing a protest in response to Amazon’s treatment of workers when the pandemic first hit the US .

In a meeting shortly after the firing, attended by Jeff Bezos and other Amazon executives, Smalls was labeled by the company’s general counsel as “not smart or articulate”, according to a leaked memo. He worked at Amazon for about five years before he was terminated.

Smalls said that throughout the union campaign, Amazon has openly opposed the unionization effort, while organizers have had the police called on them several times. Recently, he alleged, Amazon started bringing in new hires to a nearby hotel rather than the JFK8 warehouse location as organizers were meeting and hoping to sign them up.

“We’ve been out there for six months, meeting workers and signing workers day and night. Sometimes I’ve been out for 36 hours straight, just trying to get to our goal,” said Smalls. “The workers that are organizing themselves within these facilities, because they’re the ones that are really inside the facility, to see that, to witness and to be a part of it, it’s just been a magical experience, something that I’ve never fathomed.

“The energy and culture we built over the last six months with these workers, it’s been very strong. Everybody’s excited.”

The warehouse opened in September 2018 and has been a site of contention between workers, labor groups, and the company since.

In February 2019, Amazon fired Justin Rashad Long over a minor safety violation, which he alleged was in retaliation for him speaking at a union rally over working conditions at the warehouse. Protests were organized by Long, other workers, and a coalition of labor unions and groups to demand Long’s reinstatement. Amazon denied the allegations.

Occupational Safety and Health Administration data on injuries at the warehouse revealed an injury rate of 15.19 in 2018 – a three-times higher rate than injuries at other warehouses nationwide. Workers at JFK8 have widely reported unsafe working conditions and pressure to meet quotas and rates, and have held protests and delivered petitions to management about their concerns. Amazon dismissed safety concerns at the time the data was publicly reported.

In February, Amazon workers in Bessemer, Alabama voted in the first union election at an Amazon warehouse to join the Retail Wholesale and Department Store Union.

Though the union was voted down in the election, the National Labor Relations Board is currently reviewing overturning those election results and ordering a new election over Amazon’s conduct through the election. Allegations include installing a United States Postal Service mailbox and retaliating against workers involved in union activity.

As part of a recent settlement with two former Seattle-based employees who alleged they were fired in retaliation for activism, Amazon agreed to pay back wages to the fired employees and post a notice to all tech and warehouse workers affirming their rights.

Dozens of unfair labor practice charges were filed by workers against Amazon with the National Labor Relations Board during the pandemic, with several workers alleging they were fired in retaliation for organizing or advocating for improved safety conditions.

Amazon said in a statement: “Our employees have the choice of whether or not to join a union. They always have. As a company, we don’t think unions are the best answer for our employees. Every day we empower people to find ways to improve their jobs, and when they do that we want to make those changes – quickly. That type of continuous improvement is harder to do quickly and nimbly with unions in the middle.”