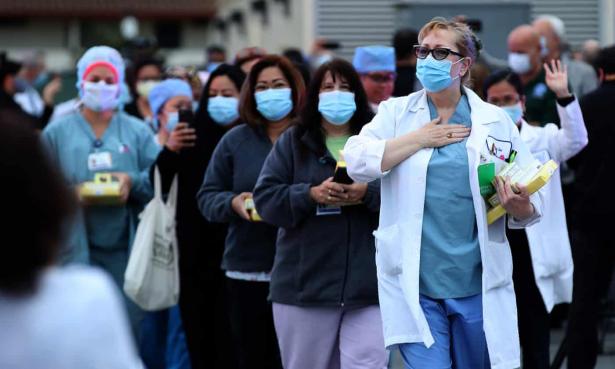 Nurses are applauded by police and firefighters as they leave Kaiser hospital at the end of their shift on May 14, 2020 in South San Francisco, California. ,Photograph: Justin Sullivan/Getty Images

Across corporate America, relations between companies and their labor unions range from chilly to ice-cold. Not at Kaiser Permanente – the California-based healthcare giant. Kaiser has long been seen as having the nation’s best labor-management partnership. Now the partnership finds itself in crisis as 34,000 Kaiser Permanente healthcare workers prepare to strike on Monday, in what would be the largest walkout in this fall’s strike wave.

After risking their lives during the pandemic, many Kaiser workers are asking how things could have turned so sour in the much-praised partnership, in which managers and union members team up at hundreds of Kaiser facilities to find innovative ways to improve care and efficiency, saving the company tens of millions of dollars a year. 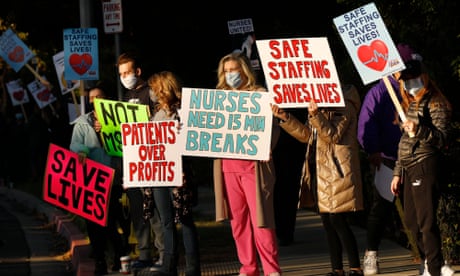 ‘We went from heroes to zeroes’: US nurses strike over work conditions

Last week one of Kaiser’s nurses’ unions served notice it would strike on 15 November, and soon after, several other unions also voted to strike. The nurses’ union – United Nurses Associations of California/Union of Health Care – complained that management’s latest employment offer would “depress wages for current employees and slash wages for incoming workers”.

Saying that its labor costs were far above its competitors, Kaiser initially proposed raises of 1% a year for three years and cutting the pay of new hires to 26% below those of its current employees.

“The partnership has been built on it being a leading payer in the market,” said Adrienne Eaton, dean of the Rutgers School of Management and Labor Relations, who has written about Kaiser. “If they’ve decided not to do that any more, it’s going to cause a strong reaction among the unions.”

It certainly caused a strong reaction in Semanu Mawugbe, a Kaiser nurse in Los Angeles. “It’s a slap in the face,” he said, noting that the 1%-a-year offer was well below this year’s 5%-plus inflation rate. “They tell us we’re heroes and we’re much appreciated because of everything we did during the pandemic”, he said. “But their offer shows they don’t mean it. We’re the ones who sustained the hospitals and took care of the sick like it’s a war zone.” The unions say Kaiser is seeking to squeeze wages when the non-profit company is doing well, with $45bn in cash reserves and $6.8bn in operating profits the last three years.

Since Kaiser’s labor-management partnership was founded in 1997, none of its 35 union locals has gone on strike. The partnership includes over 100,000 union members. Kaiser overall has $89bn in annual revenues, 12 million health plan members, 39 hospitals and more than 700 other medical facilities spread across eight states and Washington DC. 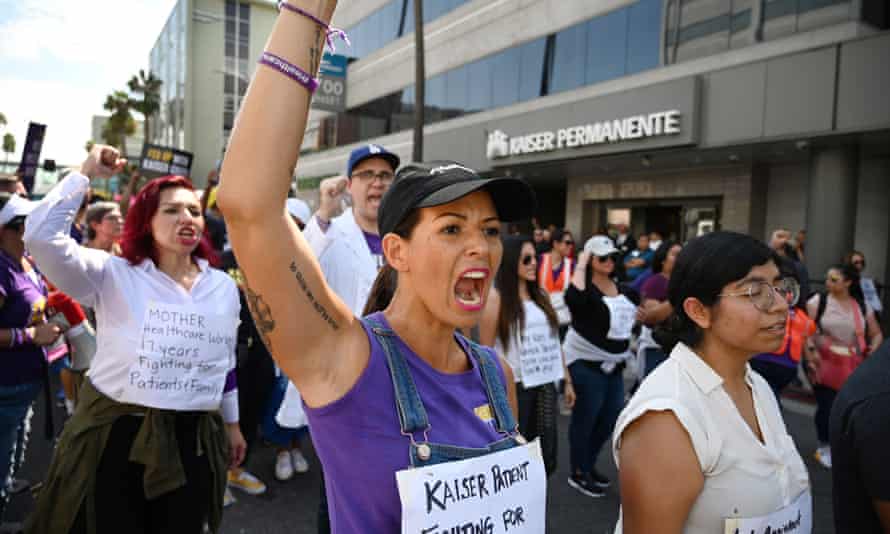 “The challenge we are trying to address in partnership with our unions is the increasingly unaffordable cost of healthcare,” Arlene Peasnall, Kaiser’s senior vice-president of human resources, said in a statement. “The fact is wages and benefits account for half of Kaiser Permanente’s operational costs.”

Peasnall said Kaiser’s wages have risen to the point where its union members earn “on average 26% above the market rate”. “This is unsustainable,” she said. Facing a strike, Kaiser management increased its contract offer to a 2% raise in each of four years with a 2% lump sum payment in the contract’s first two years. Under Kaiser’s revised proposal, new hires would be paid 15% less than current workers.

Several labor experts said Kaiser made some elementary bargaining mistakes that were bound to inflame its workers. Kaiser offered just 1%-a-year raise while its largest union, a service employees’ local representing 46,000 Kaiser workers, has a contract that calls for raises of 3% a year over the next two years. Other unions felt shortchanged to be offered less than that. “It does seem like a provocation,” Dean Eaton said.

Labor experts also said Kaiser’s two-tier proposal to pay new hires significantly less was bound to anger workers and worsen staffing problems. “It generally doesn’t make sense having two tiers of staff and it makes even less sense when we’re going through a pandemic.” said Peter Lazes, former director of the Health Care Transformation Project at Cornell University. “I have to blame management for not being sensitive. It seems hard to understand why they’re doing this when there’s a nursing shortage nationally.”

They tell us we’re heroes and we’re much appreciated … But their offer shows they don’t mean it. We sustained the hospitals and took care of the sick like it’s a war zone

Lazes, who has studied Kaiser’s partnership, isn’t so sure that the labor dispute will jeopardize the partnership long-term. “The idea that you’re going to have differences between labor and management partners that might result in a strike or a strike vote is part of the labor-management process,” he said. “Union and management have to know how to dance together and box at the same time.”

Denise Duncan, president of the United Nurses union, called Kaiser’s offer “totally unacceptable”. She derided the proposal to pay new workers less: “You can’t solve a nursing shortage that way.” She faulted Kaiser’s wage survey, saying it should have been done in cooperation with Kaiser’s unions. She said the survey, comparing Kaiser’s pay levels with those at smaller, less sophisticated medical institutions, often in rural areas, was apples and oranges.

“Ultimately, we just had to pull our levers [for a strike]”, Duncan told the Guardian. “Our members were angry. Everyone worked so hard. We feel Kaiser let our principles of partnership go.”

Lazes said that Kaiser’s new CEO and leadership team do not seem nearly as committed to making the labor-management partnership succeed and run smoothly as was Bernard Tyson, a Kaiser CEO who died of a heart attack in November 2019. Duncan wholeheartedly agreed. “We believed Bernard to be a purist on social justice and working people and having the utmost respect for the history of the partnership,” she said.

Duncan said Tyson’s successor, Greg Adams, had been doing little to ensure the partnership’s success. “You got to invest in it. You have to bring in the next generation of workers and leaders,” she said. “If you don’t invest in it, it dies.”

Peasnall said the company was devoted to the partnership. “Don’t mistake passionate advocacy in bargaining with actual changes in a relationship,” she told the Guardian. “Our labor-management partnership remains strong and is a significant source of our strength as an organization.”

Peasnall added: “We absolutely believe that as we conclude bargaining this cycle, and get through the disastrous pandemic, we will emerge stronger and more united than ever before.”

Meanwhile nurses like Semanu Mawugbe are angry and ready to walk out. “None of us want a strike, but there are times it has to be done,” he said. “We’re hoping for a last-minute, 11th-hour turnaround.”