Cool, elegant, and devastating, a film as tightly woven and plaintive as the source novel itself. It’s an artifact of its time, both 1929 and in 2021, when the questions around identity have morphed and shifted but are still relevant as ever. 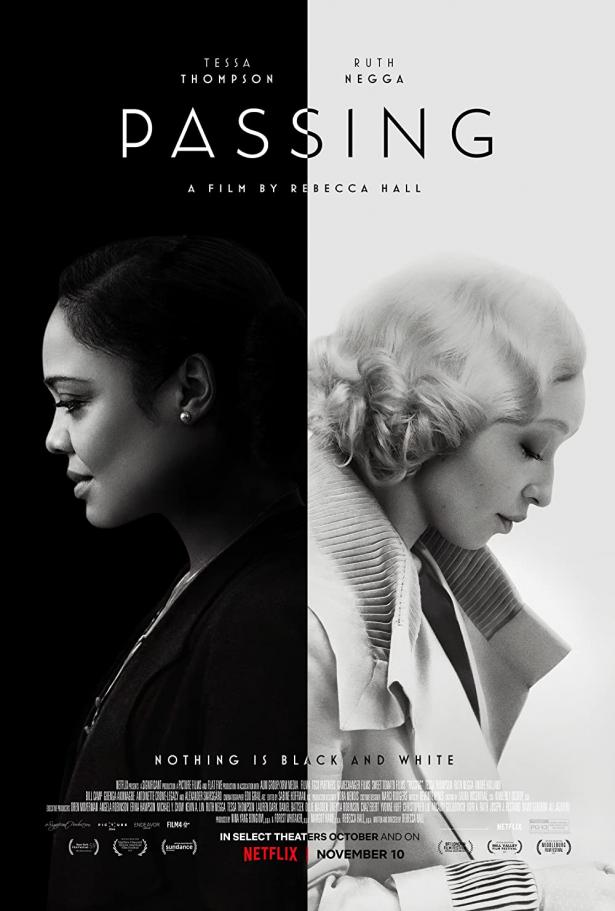 Passing,IMDB
Halfway through Nella Larsen’s 1929 novel Passing, the book’s protagonist, Irene Redfield, is feeling uneasy. She has just had a tense argument with her husband. Now, watching him fiddle with his hat, Irene is worrying: “Was she never to be free of it, that fear which crouched, always, deep down within her, stealing away the sense of security, the feeling of permanence, from the life which she had so admirably arranged for them all, and desired so ardently to have remain as it was?”

Larsen’s book is suffused with that sense of unease, the feeling that one wrong move might undo a life entirely, that the structures on which our families, routines, and even identities rest are precarious. And the new Netflix movie based on Larsen’s book, adapted for the screen by Rebecca Hall and starring Tessa Thompson and Ruth Negga, brings Larsen’s prose — unease and all — to vibrant, visual life.

The story transitions seamlessly to the screen in part because the “passing” of the title refers primarily (though not exclusively) to its main characters’ ability, in a segregated society, to “pass” as white. The story centers on Irene (Thompson) and a childhood friend, Clare Kendry (Negga), with whom Irene unexpectedly reconnects one day at a whites-only hotel. Both women are Black, having parents or grandparents who were Black, but both are also light-skinned enough for white people of similar social class to assume otherwise.

Share this article on
Irene normally spends her time in Black society in Harlem, and has married a successful Black doctor named Brian (André Holland), with whom she has two children. Her visit to the hotel is simply an escape from the heat outside, and enabled by what she knows: She can conceal her identity for convenience’s sake.

Clare, on the other hand, is married to a white man (Alexander Skarsgård), who not only doesn’t know his wife’s ancestry but is actively racist, and virulently hostile toward Black people. The couple have a daughter. And Clare has spent her adult life happily living the life she’s chosen, though her encounter with Irene awakens a kind of curiosity in her about the culture she so willingly left behind.

Passing was published just after World War I, at a time when American culture was changing rapidly, and in which the definitions of race, sexuality, and gender categories were in flux. There was a lot of anxiety in the US about people crossing “the color line.” White people who fancied themselves sophisticated might go to Harlem to encounter what they viewed as Black culture. (In fact, what they increasingly encountered was Black culture manufactured for their expectations — in essence, a tourist experience.)

The novel isn’t only about race and about colorism, though it certainly is about that. It’s also about the myriad sorts of “passing” that its characters engage in — living in a social class or even conforming to gender stereotypes in which they don’t feel quite comfortable. That’s why, almost a century after it was first published, the book is often viewed as a groundbreaking novel of intersectionality: Clare and Irene are just as much beholden to their roles as wealthy women as they are to their racial identity, and those factors are inextricably linked.

Larsen was intimately familiar with the world that Clare and Irene are navigating. She was born to a white Danish immigrant mother, with a father who was most likely Afro-Caribbean, though he disappeared from her life when she was young. Her mother married a white man and together they had a son, but family life was often fraught. When Larsen was still a child, her family had to move neighborhoods when they encountered discrimination — because of her.

After attending Fisk University, an HCBU, Larsen married Elmer Imes, one of the first two Black Americans to hold a PhD in physics, and moved to Harlem. They became friends with figures like W.E.B. Du Bois and were part of the Harlem Renaissance. While working as a librarian and a nurse, Larsen published stories and, in 1928, her first novel, Quicksand, which also centers on a mixed-race woman navigating a world that’s springloaded with traps for her.

Her second novel, Passing, solidified Larsen’s place as one of the most influential novelists of the Harlem Renaissance, though the book’s critical evaluation waned and then waxed over time. A few years after Passing was published, Larsen became the first Black woman to be awarded a Guggenheim fellowship. But soon after, her marriage fell apart, and though she kept writing, none of her further work was published. In 1942, her estranged husband died, and so the alimony stopped, and Larsen turned back to nursing to support herself. She died in 1964, at the age of 72.

Given what happened to Larsen, it’s not hard to read Irene’s unease with her own life as a premonition, or perhaps descriptive of what Larsen was already feeling. But it’s also a wider sentiment, one that Rebecca Hall, in writing and directing the new film, understands.

Hall’s grandfather was Black, and, as she’s said in interviews, spent his whole life passing for white. So Passing spoke to her as a novel, and she spent many years trying to get a film adaptation made. “It’s only really through this journey of making this movie, and spending so much time with this book, that I really uncovered that and understood it,” she recently told an interviewer. “I’ve found out the history of his family now, things that were obscured and erased. I’ve managed to get it back into my family’s life.” The movie, she says, also helped her mother come to terms with her own family’s identity.

Yet Hall recognizes that while Passing is about race, it extends beyond one identity category — “intersectionality, and all these different aspects of women under the patriarchy, fluidity around sexual choices and boundaries, homosexuality and heterosexuality all come into play,” she said. “But [Larsen] didn’t know that she was writing some kind of intersectional tome.”

Mostly, Larsen focused on the psychological effect that playing roles has on those who occupy them. And that effect is emphasized by Passing’s structure. It’s a short novel (the copy I read was 114 pages long), broken into three sections labeled “Encounter,” “Re-Encounter,” and “Finale.” As in a good play, each of Passing’s “acts” is built around the subtle and unspoken power dynamic between its main characters and the people around them, all trying to speak, act, dress, and look like whatever they believe the situation requires. And while we have access to Irene’s interior life, the other characters remain opaque. We have to think, guess, and put ourselves in their place to understand what’s happening.

Hall emphasizes this theatricality by shooting Passing in black and white, which also serves to underline the constructed nature of the identities that are at play. After all, “Blackness” and “whiteness,” as well as traditional roles associated with gender, sexuality, and social class, are constructs with a long history behind them. The people who live in the midst of them find themselves hemmed in by those constructs — some more than others. In the first scene of Passing, the image is lit so brightly that Negga’s and Thompson’s skin tones seem to shift and change, a visual metaphor for the theme the film is about to explore.

The result is cool, elegant, and devastating, a film as tightly woven and plaintive as the source novel itself. It’s an artifact of its time, both 1929 and in 2021, when the questions around identity have morphed and shifted but are still relevant as ever. And they still leave us, individually and as a society, feeling uneasy about where we stand in relation to one another. Passing captures that feeling and challenges today’s audience to dwell with the discomfort, and wonder what it might mean to live a different way.

Passing is now streaming on Netflix.