The labor pattern ECP scientists envisioned treated the new systems as super-charged desk calculators operated by people like Snyder who, they believed, would not create new knowledge. 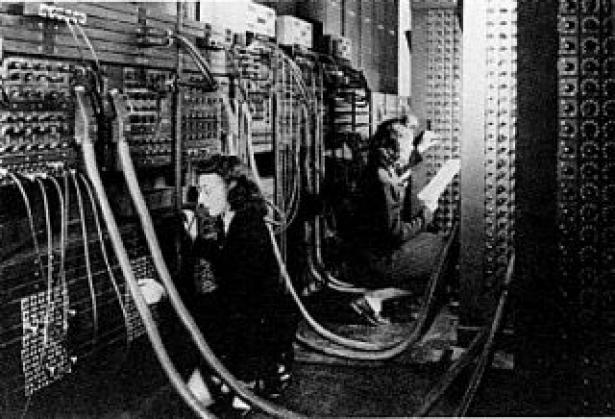 In the fall of 1946, Frances “Betty” Snyder discovered she had a problem.

Snyder (later Holberton) was one of the original programmers of the ENIAC, the Electronic Numerical Integrator and Computer—the state-of-the-art in electronic computing in the U.S. at the time. Fran Bilas, Betty Jennings, Ruth Lichterman, Kay McNulty, Betty Snyder, and Marlyn Wescoff were the six women computers hired in 1945 to do what their male colleagues imagined was a menial secretarial job: program complex mathematical problems on a one-of-a-kind automatic computer from little more than wiring diagrams and brief meetings with one of the engineers who designed the circuits.

That failure of imagination led top men to design a new electronic computer that could not be programmed, a problem Snyder realized she would have to solve.

Setting up the first computations on the ENIAC, still under development on the top floor of an old factory building in Philadelphia as a University of Pennsylvania research project, was an intensely physical experience. Programs were created by connecting circuits point-to-point across a wall of plugboard panels using thousands of cables as thick as a finger and up to around ten feet long. The system could only be configured for one program at a time, executing instructions by sending pulses down one giant looping, branching daisy chain. When they first brought the ENIAC online in 1945, Snyder and her colleagues were the only people who could see more than a mess of cables tumbling out of those panels. 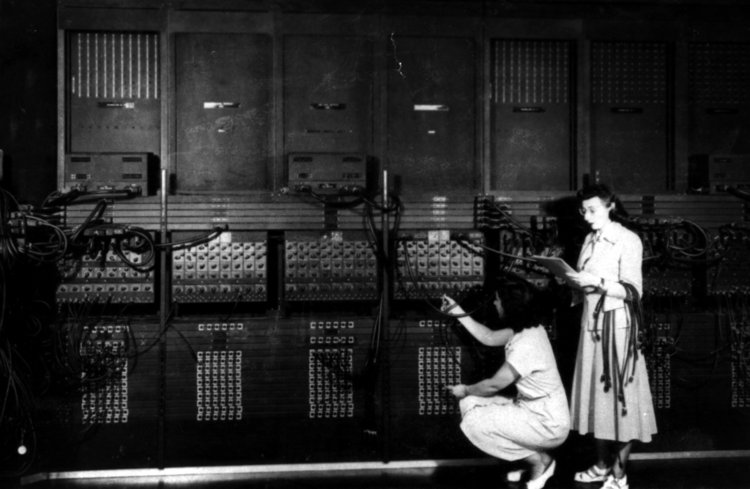 The ENIAC team developed a technique they called a “break point”—they would pull a cable, leaving an open socket which broke that long daisy-chained circuit. A program would then run to that point and stop, freezing the system in place and allowing the programmers to examine the machine state. This was an important part of debugging a bad program, but it also enabled a new kind of computational work. One could experiment and try new approaches to problems, using a break point to analyze the state of the system without assuming the machine behaved exactly as it theoretically should.

While Snyder and her colleagues developed new computational methods with the ENIAC, the first generation of a new type of machine called a stored program computer was under construction. ENIAC programs were wired by hand on wall-sized plugboards, but the new systems held both programs and data in electronic memory, making them part of the internal state of the machine. Instead of the ENIAC’s daisy-chained circuits, there would be an “instruction set”—a small set of permanent circuits to perform simple operations—and a “program” would become a list of numbers stored in memory that told the computer which instructions to execute and in what order. The ENIAC team had developed programs with loops and branches, and the only way to halt the new stored-program machines at an arbitrary point in that kind of program, without changing any numbers stored anywhere in the system, was to create a stop instruction as part of the permanent instruction set. Snyder and her colleagues knew that the act of walking up to a panel and pulling a cable out of an ENIAC program was itself a computational operation that required its own instruction in the new machines. 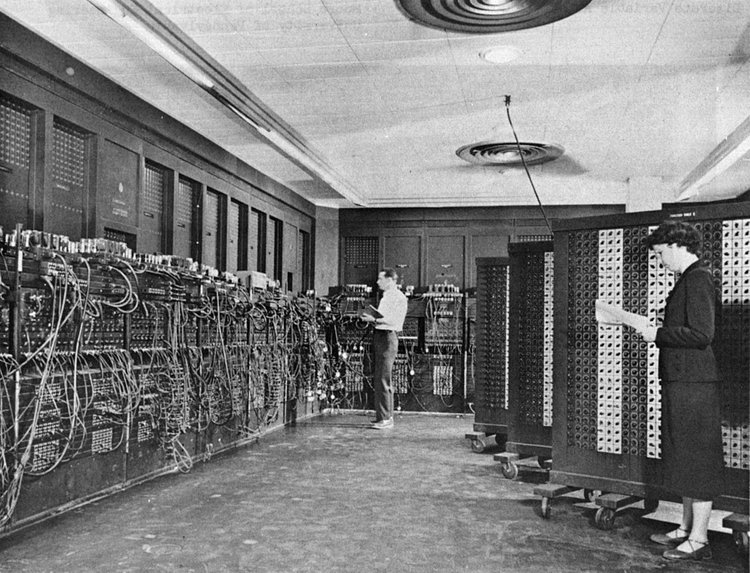 In summer 1946, John von Neumann, a storied mathematician, physicist, and celebrated contributor to the Manhattan Project, approached the ENIAC team to prototype an instruction set for a stored program computer. In development by the Electronic Computer Project at the Princeton Institute for Advanced Study (IAS), the IAS machine was not the first of its kind, but the design documents became a guide for much of the field. Snyder expected von Neumann’s group in Princeton to understand the importance of including a stop instruction, but to her astonishment, the subject never came up even after weeks of work. Speaking at a conference in 1967, Snyder recalled traveling to Princeton to address the issue:

Von Neumann did not understand Snyder’s comment. Empty sockets that let a program “go to bed” almost certainly referred to the end of a program. He thought Snyder wanted an instruction that would tell the system when there were no more instructions to run. One might be tempted to think this is simply a case of a manager who did not understand how to do the work. But there is more to it than that.

In 1946 and 1947, across hundreds of pages in several reports from the Electronic Computer Project, von Neumann and co-authors laid out all the conceptual tasks they considered relevant to building and operating an IAS-style machine. But everywhere in those documents, the authors showed how to solve problems they already knew how to ask and answer. These scientists saw fast automatic computers as transformative tools, but they did not imagine those machines as engines for research driven by intellectuals like von Neumann. The labor pattern ECP scientists envisioned treated the new systems as super-charged desk calculators operated by people like Snyder who, they believed, would not create new knowledge.

The only place something like a stop instruction appears in those early documents is briefly at the end of the first report from summer 1946. The authors mentioned that it would be “convenient” to have a keyboard attached to the computer that would allow an operator to stop a program, change numbers in memory, and start the computation where it left off. But they also planned for single instructions to run in a fraction of a millisecond. As Snyder tried to point out, an operator would have to pre-program a stop instruction to halt such a fast sequence. In fact, many complex issues sat just under the surface of “convenient'' practical alterations to theoretical descriptions in the ECP reports. These were places where women computers, like the ENIAC programmers, had been generating new ideas for years. There is more than one way to implement complex programs, and finding new ways to investigate questions about computational processes is the heart of what we now call computer science.

Snyder knew the project was in trouble when von Neumann completely misunderstood her request for a stop instruction:

So the next week when I came up with some alterations to the code, I approached him again with the same question. He gave me the same answer. Well I really got red in the face. I was so excited and I just wanted to tell him off. And I said, “But Dr. von Neumann, we are programmers and sometimes we make mistakes.” He nodded his head and the stop order went in.

In the end, after confronting one of the most famous scientists in the world multiple times, Snyder could not make him understand that she was doing something important. The only way she could put von Neumann in a position to change his plan and implement a useful instruction set was to convince him she and her team, as mere programmers rather than competent intellectuals, were so error-prone that they needed a special tool to assist them. So, the stop instruction in the IAS machine was the result of two innovations: the ENIAC programmers’ new computational methods and Betty Snyder’s discovery that John von Neumann could only be convinced to collaborate with his women colleagues—despite their expertise and credentials—if he believed they needed help following orders.

This episode reveals not only the kind of social and emotional labor demanded of expert women; it also invites us to consider the depth of creativity required to imagine how one's work will change in the future. Von Neumann was already famous for his genuinely profound insights into mathematical and scientific problems, but like anyone else, his vision was limited. Von Neumann understood the shape of machines and technologies to come, but even after Snyder confronted him directly, he failed to imagine the ways scientists would adapt to a research landscape transformed by those technologies.

We do not know what might have been if Snyder and her wildly successful colleagues were recognized and listened to the way men like von Neumann were. Even decades later, Grace Hopper, now renowned for her work developing programming languages, lamented in a 1980 interview that no one seemed to know it was Snyder who wrote the first program that wrote other programs. But we do know our history is not what we think it is. We are today, both in the present and in our reading of the past, missing extraordinary things right under our noses. The best we can do is to look out for those moments when someone does coyly say, “Stop here and look.”

Devin Short is a PhD candidate in history at the University of Washington in Seattle, where he studies the labor and laboratory practices involved in building, operating, and maintaining computer models of the Earth’s climate since 1960.