"It would be absolutely unacceptable to force 57 million senior citizens to pay $11.50 more a month in Medicare premiums due to Biogen's greed for a drug that has not been proven to be effective by the scientific community." 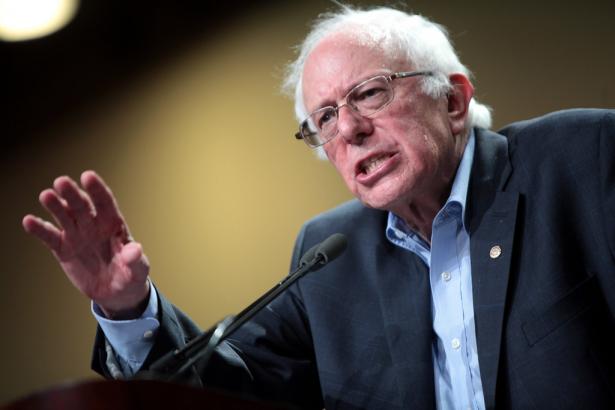 Bernie Sanders, by Gage Skidmore is licensed under CC BY-SA 2.0

In a letter to the president, Sanders (I-Vt.) noted that the pharmaceutical company Biogen has placed a $56,000-per-year price tag on Adulhelm, a treatment that the FDA approved in June despite experts' concerns about the dearth of evidence showing it actually works to slow Alzheimer's-induced cognitive decline.

"With Democrats in control of the White House, the House, and the Senate, we cannot let that happen."

"Incredibly and immorally, Biogen... has set the price of this Alzheimer's drug at $56,000 even though the Institute for Clinical and Economic Review, an independent non-profit organization, has estimated that the maximum price of this drug should be no higher than $3,000-$8,400," the Vermont senator wrote. "This is a perfect example of why Medicare should be negotiating drug prices with the pharmaceutical industry."

Last month, as Common Dreams reported, the Centers for Medicare and Medicaid Services (CMS) announced that monthly Medicare Part B premiums would be increased to $170.10 in 2022, up from the current level of $148.50.

CMS officials attributed around half of the planned hike—which would be one of the largest in Medicare's history—to "additional contingency reserves due to the uncertainty regarding the potential use of the Alzheimer's drug, Aduhelm™, by people with Medicare."

Without the Aduhelm-related increase—which Sanders is pushing Biden to block—the monthly Medicare premium for 2022 would be around $159.

Medicare officials are still in the process of deciding whether the program will cover the exorbitantly priced drug, which the Department of Veterans Affairs decided not to include on its national formulary, citing "lack of evidence of a robust and meaningful clinical benefit."

Sanders called the planned premium increase "outrageous" and argued that "it would be absolutely unacceptable to force 57 million senior citizens to pay $11.50 more a month in Medicare premiums due to Biogen's greed and thirst for massive profits for a drug that has not been proven to be effective by the scientific community."

"The notion that one pharmaceutical company can raise the price of one drug so much that it could negatively impact 57 million senior citizens and the future of Medicare is beyond absurd," he continued. "With Democrats in control of the White House, the House, and the Senate, we cannot let that happen."

Specifically, Sanders called on Biden to direct the U.S. Department of Health and Human Services to "immediately prevent the $11.50 a month increase in Medicare Part B premiums associated with Aduhelm from going into effect next year."

The senator also urged Biden to instruct CMS to delay its approval of Aduhelm and "take executive action to reinstate and expand the reasonable pricing clause that was established in 1989 by the National Institutes of Health requiring drug makers to charge reasonable prices for prescription drugs and treatments that receive federal funding."

Public health campaigners have been warning for months that the FDA's approval of Adulhelm—which led several agency advisers to resign in protest—could spell disaster for Medicare.

Dr. Michael Carome, director of Public Citizen's Health Research Group, said in a November statement that "all Part B Medicare beneficiaries soon will be forced to bear significant financial burden as a direct result of the FDA's reckless decision to approve [Aduhelm], a drug that has not been proven to provide any clinically meaningful benefit to Alzheimer's."

"To protect the many Medicare beneficiaries who cannot afford the unacceptable 15% jump in Part B premiums," Carome added, "CMS must promptly announce that it will exclude [Aduhelm] from coverage under the Medicare program until there is definitive evidence that the drug provides substantial... cognitive benefit to Alzheimer’s disease patients."