bell hooks was a revolutionary...Like Ella Baker and Assata (and Audre Lorde and Barbara Smith and Angela Davis, etc) she has her share of "daughters." Literally thousands of amazing young Black women leading radical movements and making radical art 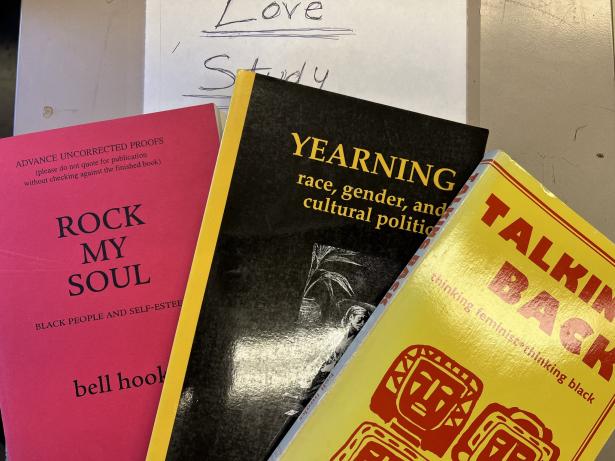 Gloria Watkins/bell hooks Presente! Here we go again. Another passing of an intellectual giant, a Black revolutionary love warrior and fugitive from an academy that doesn't love us. After nearly two years of relentless premature deaths, we lose four comrades in six or seven days (Julius Scott, Greg Tate, Tyler Stovall, and now bell hooks), all in their 60s. Too much.

I discovered bell hooks in 1981, when I read Ain't I a Woman in college and realized that we can't claim to be radical without being feminists, and as Barbara Smith told us, feminism is not white-owned. bell refused to be disciplined by the academy, living life on her terms and writing for a much larger audience when it wasn't in vogue. She did not write all of those books to be popular, but to "transgress," to force us to think about gender and patriarchy, love and intimacy, representation and revolution. she posed hard questions and called out those we thought of as comrades or "allies" for failures of judgment, analysis, vision, even courage. And yet she leveled her critiques with love and honesty, and a willingness to be vulnerable and expose her life and experience as a window onto what it means to turn personal pain into transformation.

I'm honored to have known Gloria, and to have been attacked as a "public intellectual" alongside her and others, though I did not see a lot of her over the last decade. I'm proud to have passed along several of my own copies of her books to my daughter, Elleza Kelley (The Real Professor Kelley!) One of the books too often overlooked is Where We Stand: Class Matters (2000). She laid out a position completely relevant to today's debates around so-called class vs race "reductionism." Here is a bit of what she wrote:

"At the end of the day the threat of class warfare, of class struggle, is just too dangerous to face. . . . They cannot see the changing face of global labor—the faces of the women and children whom transnational white supremacist capitalist patriarchy exploits at home and abroad to do dirty work for little pay. They do not speak the languages of the immigrants, male and female, who work here in the meat industry, in clothing sweat-shops, as farmworkers, as cooks and busboys, as nannies and domestic workers. . . .

"Class is still often kept separate from race. And while race is often linked with gender, we still lack an ongoing collective public discourse that puts the three together in ways that illuminate for everyone how our nation is organized and what our class politics really are. Women of all races and black people of both genders are fast filling up the ranks of the poor and disenfranchised. It is in our interest to face the issue of class, to become more conscious, to know better so that we can know how best to struggle for economic justice."

I am eternally grateful to bell hooks for what she taught me, as I am to all of the brilliant Black women scholars who have been my teachers over the years. I write these words hyper aware of all the beautiful things friends, comrades, colleagues, and former students have been posting about me recently. While it's all very embarrassing, it's also evidence of how and why we keep surviving this place, the modern settler university and all of its traps and minefields. We continue talk back, yearn, transgress, commune, remember, and hold on to one another. It's All About Love. New Visions. Rest in Peace and Power, dear sister.

Get to Know bell hooks

bell and the World

bell hooks’ impact stretches beyond her Kentucky roots. The little girl whose grandmother was nicknamed “Glory” is now heralded as one of the preeminent feminist voices of our time. In 1995, Utne Reader recognized her among its “100 Visionaries Who Can Change Your Life.” TIME honored her in 2020 with its “100 Women of the Year,” dubbing hooks a “rare rock star of a public intellectual.”

With more than 30 books to her name and articles in magazines like Ms., Essence and Tricycle: The Buddhist Review, hooks commands attention. Her writing blends social commentary and autobiography with feminist critique, and no matter the topic, she delivers scholarly rigor in everyday prose.

Before relocating to Berea, hooks taught at institutions such as Stanford, Yale and The City College of New York. She has held residencies in the United States and overseas, and in 2014, St. Norbert College hosted “A Year of bell hooks” in her honor.

Following the police murders of George Floyd and Breonna Taylor in 2020 and nationwide racial justice protests, hooks’ All About Love: New Visions became sought-after reading. Readers continue to turn to hooks for a clear perspective on how we can move towards justice and love. 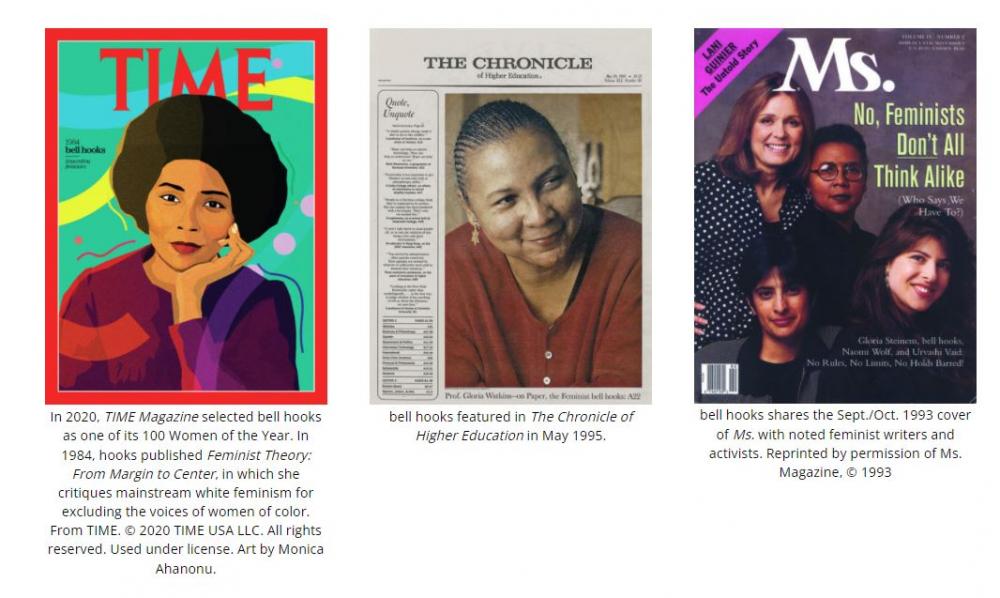 bell hooks (née Gloria Jean Watkins) was born in Hopkinsville, Kentucky in 1952—shortly before Brown v. Board of Education reached the U.S. Supreme Court. hooks grew up between the hills and a segregated town. Her early schooling presented Kentucky as race-neutral, neither proor anti-slavery. But school children routinely visited Jefferson Davis’s birthsite, a Confederate monument miles from her hometown.

This history led hooks to call Kentucky a “racial apartheid.” Still, the self-professed country girl credits her commitment to self-determination and dissident speech to “the cultural ethos of the Kentucky backwoods, of the hillbilly country folk who were my ancestors and kin.”

hooks writes about Kentucky in belonging: a culture of place and challenges notions of its inherent whiteness in Appalachian Elegy: Poetry and Place. As the keynote for Berea’s Appalachian Writers Symposium in 2015, hooks asserted, “I always take the motto, like the queer motto, ‘We’re here.’ I feel that about myself as a Black person in the hills of Kentucky. I am here, and there’s nothing but love within me for the world around me.”

In 2018, the Carnegie Center inducted hooks into the Kentucky Writers Hall of Fame, recognizing her lifelong contributions to literature and justice.

In 1999, the Women’s Studies program sponsored bell hooks’ “Love and Spirituality” convocation address. Drawn to Berea’s anti-racist beginnings and wishing to return to her Kentucky homeplace, hooks joined the faculty in 2004. “I felt very much that I wanted to give back to the world I came from,” she says. “I grew up in the hills of Kentucky, and I wanted these students to see you can be a cosmopolitan person of the world but still be connected positively to your home roots.”

She also chose Berea as the site for the bell hooks Institute, which preserves hooks’ legacy through art and artifacts from her life. The Institute’s inaugural event, held September 7, 2015, featured trans actress activist Laverne Cox, credited with adding “cis” and “heteronormative” to hooks’ call to dismantle “imperialist-white-supremacist-capitalist- patriarchy.” Since then, the Institute has hosted prominent visitors, including Cornel West, Gloria Steinem and Imani Perry. These intimate talks, open to campus and community members, reflect hooks’ belief that truth telling can transform consciousness and communities.

In 2015, hooks donated her papers to the College. This monumental gift of letters, manuscripts and memorabilia, gives students and researchers insight into one of America’s sharpest feminist minds.