The power of song to literally transform the brain and move people to action has given it a place of privilege in mass political actions. Almost every revolutionary movement in modern history has had an accompanying singing culture. 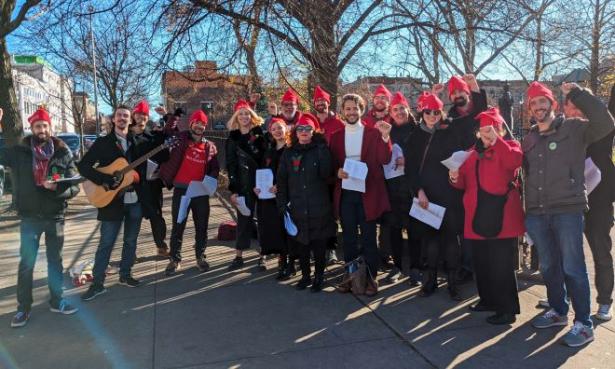 As co-founder of a radical choir in New York City, Sing in Solidarity, I spend a lot of time trying to convince people that it’s OK to sing in public. Our culture has created an enormous amount of fear around singing. I know people who regularly put themselves in danger of arrest at demonstrations and who think nothing of making a speech in front of hundreds of people but who are terrified of singing a note if anyone is listening.

When I asked Rep. Alexandria Ocasio-Cortez, who regularly faces off in debate with some of the most powerful politicians in Washington, to sing “Solidarity Forever” with my choir early last year, she demurred. “Oh, I can’t sing,” she said.

For many self-identified non-singers, for the many who were told by their middle school choir directors that they didn’t have the voice for it, singing has been relegated to the shower, the car, or the karaoke room—places that lack that same terror of exposure. Given the feeling of privacy, we allow ourselves an opening to become singers.

Karaoke can be fun, of course. (I lean toward “Psycho Killer” after a couple of whiskey sours.) But if it’s the only singing you do, you’re missing out. Karaoke gives only a dulled version of the power of song. It gets nowhere near the exhilaration a person feels when they take their voice into the streets.

The power of song to literally transform the brain and move people to action has given it a place of privilege in mass political actions. Almost every revolutionary movement in modern history—the labor movement, the civil rights movement, the anti-apartheid movement, and so many more—has had an accompanying singing culture.

That’s because singing at protests isn’t just for pleasure. It works.

Choral singing is a physical demonstration of unity. It is a simple means of communication that gives participants the opportunity to voice their purpose collectively. In South Africa in the 1980s, protesters demonstrating against apartheid used a dance called the toyi-toyi, a militant bouncing from foot to foot, along with chanting and singing (in four-part harmony). Through song and dance, they were able to communicate their demands, create crowd unity, and present a formidable and frightening show for the armed soldiers they were confronting.

The songs of the civil rights movement of the 1950s and 60s, freedom songs like “We Shall Overcome,” “We Shall Not Be Moved,” and “This Little Light of Mine,” drew from the entire repertoire of the Black American song tradition. These simple, popular songs communicated a strong message during demonstrations, lowered tensions in situations with the threat of police violence, and kept morale high when demonstrators were sent to jail en masse. In Dr. Martin Luther King Jr.’s memoir Why We Can’t Wait, he called these songs the “soul of the movement.”

Choral singing can also be an effective form of counterprotest. In the early 20th century, the Industrial Workers of the World, a radical labor union, had its labor demonstrations interrupted by the Salvation Army band. The band was sent in by factory owners to drown out the speeches of labor organizers. As a defense tactic, members of the IWW made up parodies of Salvation Army hymns. When the brass band started up, union members were ready to sing along to the music with radical lyrics, thus preventing the noise of the band from breaking up the solidarity of their demonstration.

It is in this context that the song “The Battle Hymn of the Republic” was transformed into the anthem of the American labor movement, “Solidarity Forever.” The verse “Mine eyes have seen the glory of the coming of the Lord / He is trampling out the vintage where the grapes of wrath are stored” became “When the union’s inspiration through the workers’ blood shall run / There can be no power greater anywhere beneath the sun.”

Radical caroling, as my choir practices it, comes from this tradition of counterprotest. There are no auditions, and singers of all abilities are welcome. My choir, as well as the handful of choirs like it, goes caroling every year, singing left-wing parodies of popular Christmas carols in the streets around the holidays. We sing songs like “The Red Flag” (sung to the tune of “O Christmas Tree,”) or make up our own parodies.

As with Salvation Army hymns, caroling songs, for some, come with connotations of sweet, family-friendly good times. The idea is to draw a crowd with the warm and inviting sound of your voices but to change the message from one of holiday cheer to one of revolutionary solidarity.

As in a karaoke room, caroling brings a private event (a Christmas party) into a public space: It creates an opening. Radical choirs use that opening to stage political happenings.

Sing in Solidarity goes caroling in support of candidates running for local elected office in New York City. We draw public attention to our candidates and their platforms by throwing holiday parties in the streets and singing the block down for hours.

Radical choirs have an objective value in progressive political movements. They can demonstrate unity and convey a message loud and clear. Studies have shown that singing in chorus releases endorphins that allow people to withstand pain for longer periods. A long, cold demonstration or a night in jail are literally less painful when you are singing with others.

We know that protest singing is effective. For the individual members of a choir, it can also be incredibly emotionally sustaining.

“It’s really hard to be an activist. It’s hard work every day,” says Savitri D of The Church of Stop Shopping. “When you’re with a group of people united around your values and you sing together, somehow it just makes it all possible.”

Elise Bryant, the founding director of the DC Labor Chorus, goes even further: “We sing because something inside needs to be expressed, something beyond words,” she says. “It has a power that no other human activity has, in that it stimulates both hemispheres of the brain, and it also alters our mood and allows us to go deeper in some ways that just talking won’t do.”

Music can take that small opening between public and private spaces and tear down the wall between them. It helps create mass civilizational events, such as the protests in Santiago, Chile, in 2019, when millions took to the streets to protest inequality. Thousands gathered in public squares to sing revolutionary songs. Protesters sang music that has become synonymous with Latin American resistance, songs like “El Pueblo Unido Jamás Será Vencido,” (“The People United Will Never Be Defeated”) and “El Derecho de Vivir en Paz” (“The Right to Live in Peace”).

The fear of public singing evaporates when you sing not just for yourself but also as a demonstration of solidarity and as evidence of the power of the collective voice. Song is an incredibly powerful organizing tool that I believe is too little utilized in activist spaces.

If you are wondering if a political movement is effective, sometimes you need to follow the music

[Annie Levin is a journalist based in New York City. Her work draws connections between the worlds of art, politics, and labor. Her recent writing can be found in Observer, Jacobin, In These Times, and Current Affairs. She can be reached at: annierlevin.com]

You’ll get a quarterly subscription to YES! Magazine, starting with our 100th issue, “A New Social Justice.” Subscribe now to learn how you can be part of building a better world.