As lawmakers weigh how to safeguard the certification of elections from a future Jan. 6 attack, they’re facing one huge constitutional roadblock. 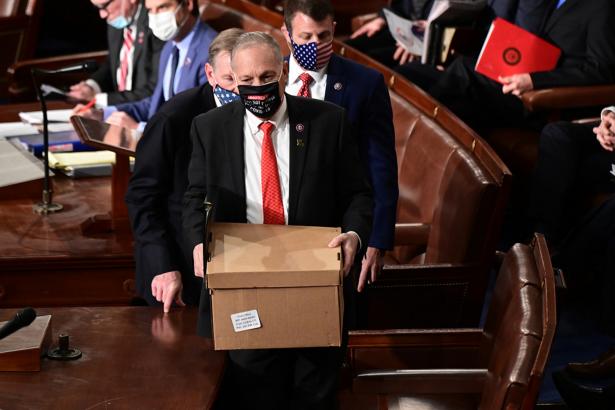 Electoral College ballot boxes arrive to a joint session of Congress to count the Electoral College votes of the 2020 presidential election in the House Chamber on Jan. 6, 2021. , Erin Scott - Pool/Getty Images

Capitol Hill’s Jan. 6 investigators are exploring ways to Trump-proof future presidential elections by tightening up how lawmakers certify the results. There’s one problem: A future Congress might simply ignore them.

Lawmakers are required under the Constitution to finalize presidential elections by certifying the Electoral College vote on Jan. 6, which made that date a target for former President Donald Trump and his most fervent backers. That work is guided — as it's been for more than a century now — by the Electoral Count Act, a complicated law passed after another rancorous White House race. But even at the time, there were deep questions about whether aspects of the law were constitutional.

And Congress has spent 134 years avoiding the subject.

Instead, it has agreed to abide by the Electoral Count Act every four years, even if, as a constitutional matter, the statute may be little more than a glorified suggestion. In fact, Congress has diligently sidestepped the debate by passing resolutions tying itself to the rules of the law — a nod to the notion that they might not be mandatory.

The unanswered questions leave today’s Congress in a perilous position. Democrats, along with the two House GOP members of the Jan. 6 select committee, want to prevent a future effort by Trump or any other losing candidate to attack the transfer of power during certification. That makes Electoral Count Act reform a central part of the select committee’s mandate.

Yet before the panel can propose a change to the law, it must at least try to settle a question that’s vexed generations of constitutional scholars: Can the Electoral Count Act’s key provisions be enforced, or can a rogue future Congress — in league with a losing presidential candidate — simply ignore it?

Rep. Jamie Raskin (D-Md.), a member of the Jan. 6 panel and a constitutional law professor, said any reforms the panel passes would largely depend on the “honor system.”

Future Congresses “have to decide to abide by the Constitution and the rule of law,” Raskin said.

Across the aisle, Jan. 6 select committee vice chair Rep. Liz Cheney (R-Wyo.) — who has lambasted Trump since the Jan. 6 attack — acknowledged “substantial debate” over the Electoral Count Act’s constitutionality in a pre-insurrection memo to colleagues urging them to certify Joe Biden’s victory.

Experts are split on whether any Congress can pass a law that would dictate how its successors certify presidential elections. Typically, the House and Senate have the constitutional power to set their own rules, which can be changed at will. Attempting to legislate against this would be unconstitutional. But the Electoral College certification is so significant that many constitutional scholars say it overrides that congressional prerogative.

Still, their view is, practically speaking, irrelevant. What matters most is how leaders of the Congress elected in 2024 and future presidential years behave. They’re not beholden to adopt the prevailing view of the scholarly community, and congressional leaders often don’t. 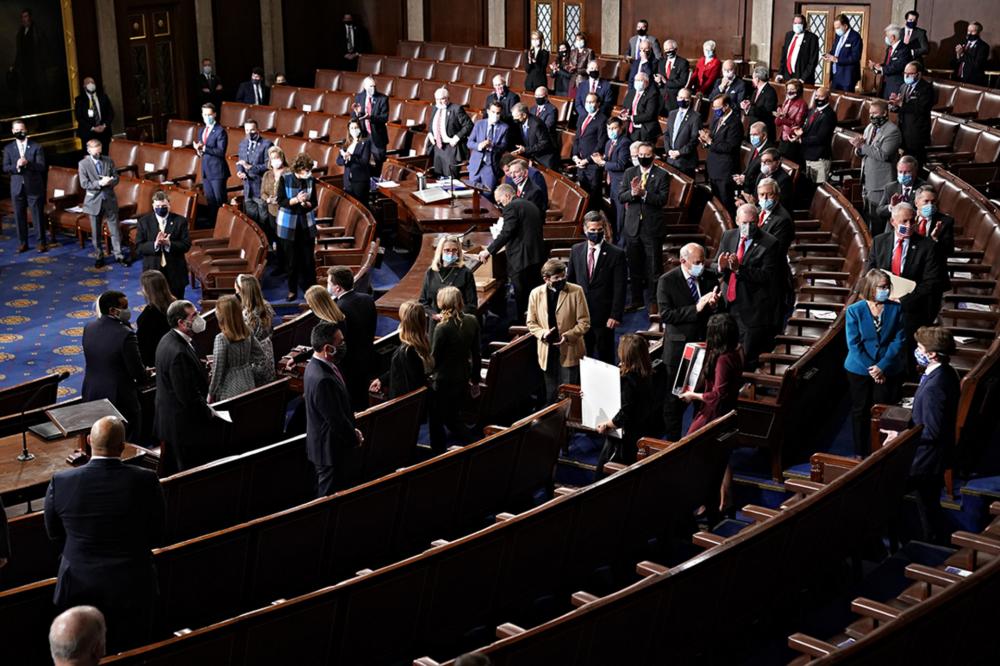 Some of Trump’s closest allies, including a few lawmakers, spent months after his 2020 defeat crafting legal theories that the Electoral Count Act is unconstitutional, urging then-Vice President Mike Pence to ignore it in a bid to keep Biden from the presidency. If a future Congress decides the Electoral Count Act can’t govern the Jan. 6 certification, these fringe theories would serve as a blueprint — and there’s little recourse to overrule them.

For now, the Jan. 6 panel appears to be forging ahead without a firm answer, deciding that doing something to prevent any future subversion of democracy is better than doing nothing. In fact, aides say the sheer act of putting reforms into law could serve as a deterrent.

“Whether a future Congress can deviate from the [Electoral Count Act] is an open question,” said a House aide familiar with efforts to reform the law, addressing the unfinished work on condition of anonymity. “By putting [changes] in law, they acquire a status that makes it hard to walk away from, and likely why Congress never has done so.”

That argument has uncanny parallels to the debate that consumed Congress in 1887, a decade after a disputed presidential election nearly splintered the republic anew.

“[T]o these congressmen, an unenforceable law was better than no agreement at all,” DePaul University constitutional law professor Stephen Siegel wrote in a widely cited 2004 analysis of the Electoral Count Act. Those 19th-century lawmakers considered an unenforceable law worthwhile, Siegel added, because of its “ability to bind Congress’ conscience and create a moral obligation to abide by its terms.”

Whether the modern Congress will keep abiding by that moral obligation, of course, remains to be seen. Many experts are convinced that the Electoral Count Act can bind Congress, because competing constitutional principles — like Congress’ power to “to make all Laws which shall be necessary and proper” — justify legislating something as critical as the transition of power.

Ned Foley, an Ohio State University constitutional scholar, acknowledged "differences of opinion" even as he asserted that future Congresses would have to abide by a changed Electoral Count Act. But, he warned: “No rules can perfectly constrain a set of human beings who, if they want to do something out of pure political desire … could ignore rules.”

Despite scholars' entreaties that Congress try for an Electoral Count Act overhaul regardless of political constraints, it's far from clear that anything could pass Congress before the 2024 election. The Senate GOP filibustered a bipartisan House-passed bill creating an independent Jan. 6 commission.

There’s also the unsettled possibility that courts would avoid weighing in on a future Electoral Count Act dispute. Judges have long hesitated to wade into internal decisions of Congress, and might be particularly reluctant to act — in the shadow of Bush v. Gore — in a way that could be seen as determining the outcome of the presidency.

Until the Electoral Count Act, the only requirement for the counting of Electoral College votes appeared in the Twelfth Amendment, which requires the House and Senate to meet in the presence of the vice president and count ballots delivered by the states. If no candidate gets a majority, the amendment sends the election to the House.

The Electoral Count Act sought to fill in the gaps, setting up a process and deadlines for states to certify their election results and requiring a joint session of Congress to be held on Jan. 6 after every presidential election. It asks the vice president to preside and read returns from each state, while empowering lawmakers to challenge the validity of certain electors.

Trump, seizing on ambiguities in the statute, pressured Pence to refuse to count dozens of Biden electors. The then-president also deputized allies in Congress to lodge as many challenges as possible, to try to delay certification of Biden’s victory. Pence’s refusal to go along turned Trump supporters against the vice president: some of the mob chanted “Hang Mike Pence” during the insurrection.

A year later, Electoral Count Act reform remains a low-profile pillar of the Jan. 6 select panel’s mission, with Rep. Zoe Lofgren (D-Calif.), spearheading the effort. Lofgren, who chairs the separate House committee that oversees elections, and her colleagues are hoping to specifically address weaknesses in the law that Trump and his allies sought to exploit.

Deborah Pearlstein, a constitutional law professor at Yeshiva University’s Cardozo Law School, suggested some “low-hanging fruit” changes to lawmakers that include raising the bar for substantive challenges to electoral votes and establishing a remedy if the House and Senate disagree on how to resolve a disputed set of electors.

“I’m worried about the Big Lie 2.0,” said Foley, the constitutional scholar, noting that the law barely held up amid Trump's baseless fraud claims. “The system needs to be ready for a scenario where the issue wouldn’t be fabricated.”

Kyle Cheney is a Congress reporter for POLITICO

Cheney joined the Congress team after covering the 2016 presidential election on POLITICO's politics team. He covered the Republican primary field with a focus on the national GOP, the Republican National Convention and the internal machinations of the party as it adjusted to the emergence of Donald Trump.

Cheney came to POLITICO in June 2012 to cover health care and spent two years covering the implementation of the Affordable Care Act and its political implications. He also covered the 2014 midterms for POLITICO's Campaign Pro. He joined POLITICO after five years reporting on Massachusetts government and politics for the State House News Service, an independent wire service in Boston.

Cheney, a New York native, graduated from Boston University in 2007 with a journalism degree after a semester as editor of BU’s independent student paper, The Daily Free Press.

POLITICO strives to be the dominant source for news on politics and policy in power centers across every continent where access to reliable information, nonpartisan journalism and real-time tools create, inform and engage a global citizenry.