Partisan Gerrymandering Is Rampant this Cycle. Congress Needs to Act.

A misleading narrative has emerged that the gerrymandering hasn’t been all that bad and distribution of seats between the parties might not change much — this story misses the full, much grimmer picture. 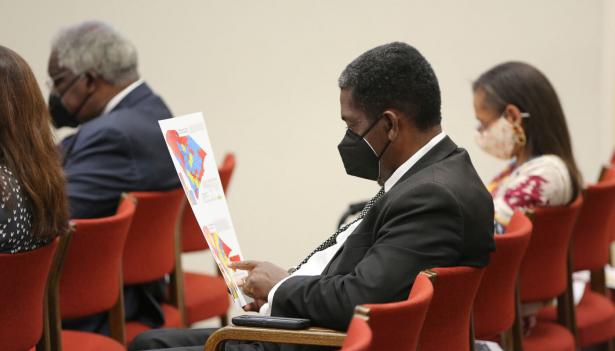 This piece was originally published in the Washington Post.

With redistricting now finished in just over half the states, a misleading narrative has emerged that the gerrymandering hasn’t been all that bad. By focusing on one narrow fact — that the overall distribution of seats between the parties might not change much — this story misses the full, much grimmer picture.

To be sure, new maps might not significantly increase seats in the near term for Republicans (who already enjoy a large advantage as a result of aggressive gerrymanders of the 2010 maps). But the maps remain deeply pernicious gerrymanders — and, in many ways, are even worse than before. By shoring up last decade’s gerrymanders, line drawers have breathed new life into distorted maps and ensured that elections in 2022 and beyond will be skewed, uncompetitive and deeply biased against voters of color.

It’s important to remember that gerrymandering isn’t just about gaining new seats — it can also be about insulating the seats you already have from competition. And one of the biggest redistricting stories this decade is how competition is being sucked out of our elections, especially in Republican-controlled states.

Again, consider Texas. Under the old Texas congressional map, there were 11 districts that Donald Trump won by 15 points or more in 2020. Under the new map, 21 of 24 Republican districts will be such super-Trump districts. Overall, in four of the most gerrymandered Republican states (Ohio, Texas, North Carolina and Georgia), the number of heavily pro-Trump districts will go from 27 to 39 after redistricting, an increase of 44 percent. (The number of super-safe Biden districts also goes up by three in these states as a result of Republican packing of Democratic voters.)

The “not so bad” narrative also, exasperatingly, turns a blind eye to the impact of the redistricting cycle on communities of color, who account for nearly all the population growth in places such as Texas. In state after state in this round of redistricting, Republican map drawers, in particular, are not only refusing to create new electoral opportunities for minority communities, in many cases they are actively dismantling them.

Take, for example, the redrawing of maps in Texas’s Fort Bend County, outside Houston. Historically, almost all of the suburban county had been included in the 22nd congressional district. But the county, which was 62.6 percent White in 1990 became just 32 percent White by the end of last decade, and its politics had become increasingly multiracial. In 2018 and 2020 in the district, Indian American Democrat Sri Preston Kulkarni ran strongly in defeat at the head of a diverse coalition. To make the seat safe for Republicans, the Texas legislature carved up the 22nd, shoving heavily Asian communities into an adjacent district and bringing in largely White, rural communities. Rather than competing for the votes of a multiracial America, Republicans are undermining it with an attack on the power of suburban communities of color.

Democrats, of course, are not above gerrymandering. In Illinois, and possibly in New York, Democrats are moving to entrench their own power, though, nationally, Democrats control line drawing for only 75 seats compared to the 187 that Republicans control. Happily, a handful of states have moved away from extreme gerrymandering. In Michigan and California, independent commissions produced fair and competitive maps that represent the changing country. These wins brighten the national picture, but we shouldn’t let them obscure the gerrymandering that continues to threaten democracy in many states.

The Freedom to Vote Act and the John R. Lewis Voting Rights Advancement Act would prevent extreme partisan gerrymandering and strengthen protections against racial discrimination. Both have passed the House and command majority support in the Senate. President Biden stands ready to sign them into law. The only obstacle is the filibuster — a legislative tool that has been used too often to thwart civil rights and racial equity legislation. It is critical that the Senate not let this Jim Crow relic stop needed reforms.

It’s Now or Never For Democracy
Our democracy faces its biggest crisis in decades, but the Brennan Center is fighting back. We have innovative research and bold policy solutions that will protect our elections and end voter suppression. Can you give today to power our fight?