A new documentary film recounts how Hampshire College students and alumni rallied to save their renowned 60’s-era experimental college from its own scheming administration. 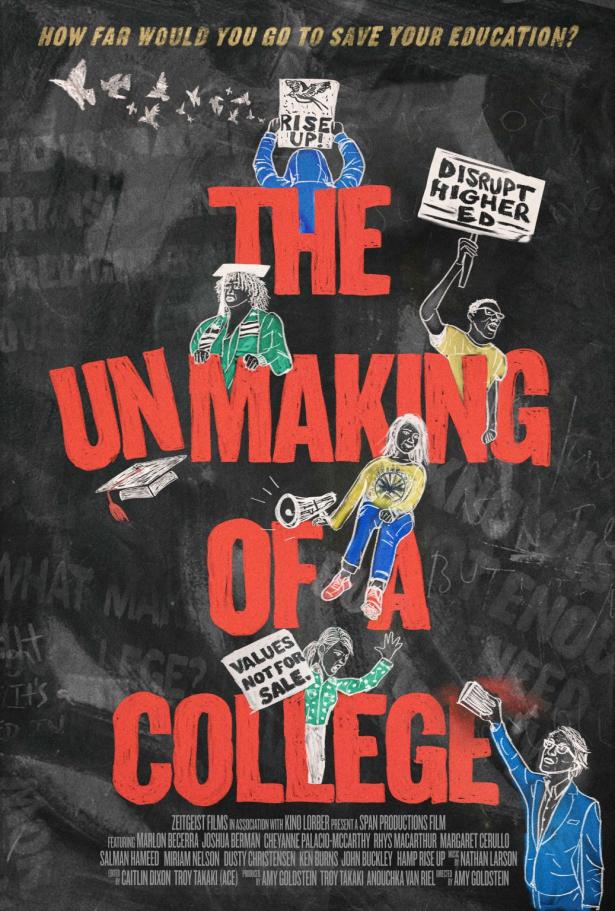 For 52 years, since its founding in 1970, students at Amherst, Massachusetts’ Hampshire College have taken the school’s motto, “To Know is Not Enough,” as a directive to act. Indeed, activism has been baked into the DNA of most Hampshire students and the promotion of self-directed learning has inspired independent research, writing, filmmaking and other artistic endeavors for many graduates. Well-known alumni members include documentary filmmaker Ken Burns, musician Elliott Smith, writer Jeff Sharlet, economist Heather Boushey and actors Lupita Nyong’o and Liev Schrieber.

More recently, however, the school has garnered attention for a different reason. As the site of the longest student sit-in in United States history — 74 days in 2019 — it became ground zero for the preservation of liberal arts programs and the defense of faculty governance.

The Unmaking of a College, a documentary directed and co-produced by Hampshire graduate Amy Goldstein, traces the struggle to save the college and provides a cogent and inspiring look at the successful organizing that was done by students, faculty, whistle-blowing board members and concerned parents and community residents hellbent on keeping Hampshire open.

It was a whirlwind effort, precipitated by newly-installed college president Miriam “Mim” Nelson’s out-of-nowhere assertion: While the college was closed for its 2019 winter break–that she was “searching for a strategic partner” to run the school because of an enormous budget shortfall. A 15% drop in student enrollment during 2018, she said, was catastrophic and meant that the school would not accept an incoming class for the fall of 2019 since the college could not guarantee that it would exist four years hence.

“It was a devastating moment,” sociology and women’s studies professor Margaret Cerullo recalled. “To have the rug pulled out from you totally unexpectedly felt brutal and corporate.”

Students were similarly aghast — and angry — and quickly formed Hamp Rise Up. Petitions and statements attesting to a lack of faith in Nelson’s leadership circulated. Meetings were held with parents and Amherst residents joining the students in speaking out. Finally, a lackadaisical response from Nelson morphed into a sit-in in her office that spilled into nearby corridors. Well-organized and militant, participants rotated but maintained a constant presence. Their 24/7 action quickly captured media attention, with the New York Times, Washington Post and Boston Globe sending reporters to campus.

Hampshire College’s students were encouraged to be critical thinkers. When top administrators announced the school was being closed, they sprang into action.

The biggest boost, however, came from local journalist Dusty Christensen of the Daily Hampshire Gazette. His investigation revealed that the college not only had a $50 million endowment, but that Nelson had been operating in extremely bad faith. Among Christensen’s revelations were several stunners. For example, Nelson had been in merger talks with the University of Massachusetts–Amherst for months and was not, as claimed, “ searching for a strategic partner.” That partner had already been found and the deal had already been tentatively sealed.

But like many well-laid plans, the arrangement began to fray thanks to student and faculty pressure and the growing recognition of U-Mass’ predatory intentions. To wit: When Mount Ida College in Newton, Massachusetts, abruptly closed in May 2018, it was quickly purchased by the state university. Opposition to the plan was immediate  and criticism fierce since the state Legislature had not been consulted about this use of tax dollars. As a result, U-Mass needed reputation damage control.

According to Hampshire board member John Buckley, between Christmas 2018 and New Year’s Day 2019, the masterminds of the U-Mass takeover had several conversations with Nelson that he was privy to. In the film, he reports that U-Mass spokespeople demanded that Nelson present the university as “the rescuer, coming in to save the day.” Buckley calls the conversations “disturbing and thuggish.”

Meanwhile, additional Nelson critics, including former Hampshire president Adele Simmons, also weighed in and pointed out that Nelson had not consulted either her predecessors or any expert fundraisers. As Simmons saw it, the college’s upcoming 50th anniversary, in 2020, was a golden opportunity to reach out to alumni for major gifts, something that Nelson had apparently never considered.

The critiques piled on. Then, unexpectedly, on April 5th, 2020 after less than two years as president, Nelson resigned, leaving the board to determine the fate of the college. They quickly hired Ed Wingenbach, a man committed to working collaboratively; launched a $60 million capital campaign and, in the fall of 2020,  despite COVID, admitted a full class of first-year students. For its part, U-Mass issued a statement that it was “pausing” the merger.

This turnaround, of course, was well-received by the protesting students. As Rise Up participant Cheyenne Palacios-McCarthy says in the film, Nelson badly underestimated the savvy of the student activists. “You can’t encourage us to ask questions and then not expect us to act,” she told the filmmakers. “We learned to be present and work in community.”

Yes, it’s activism 101 — but in these dire times this alone is reason to cheer the victory depicted in The Unmaking of a College. At the same time, like most private colleges, Hampshire remains out of reach to many would-be students. Although the school’s website boasts that 95% of enrolled students receive some financial aid, tuition for the 2022-23 academic year will be $52,714. Even with need-based grants averaging $37,000, this leaves an impossible balance for many creative kids from low and middle-income households. That, sadly, may be Hampshire College’s eventual unmaking.

The Unmaking of a College debuts at the IFC Center on February 11.

The Unmaking of a College,
Zeitgeist Films in Association with Kino Lorber
Amy Goldstein; 2022; 84 minutes