labor Memoirs of a Union Buster: Why Labor Law Reform is Necessary

The dirty tricks that bosses play on workers will continue until there is a fundamental change in US Labor Law. Most fundamental would be the repeal of Taft - Hartley and corporate “personhood.” The law favors the powerful. 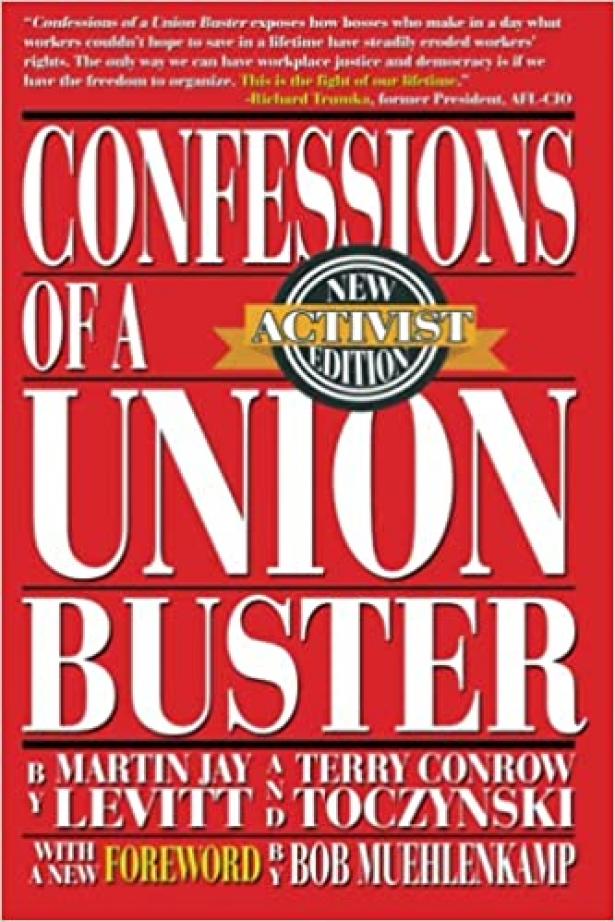 Both the life he lived and the tactics he and others used to disrupt union organizing campaigns were disgusting. Fancy cars and bottles of liquor are the rewards he goes after while doing his dirty work of wrecking working people’s lives and livelihoods. He claims undying love for his wife as he drinks heavily and sleeps with other women. He gets high over wins and depressed over losses. He is broke most of the time.

His life style fits perfectly with his dishonesty in tactics. He is not fighting on facts - but through manipulation of the management he works for. He plays on the owner’s fear of loss of control. He admits he lies about the laws to them.

This is a reissue of the book published in 1993 with a new introduction by Bob Muehlenkamp who had first hand experience with Levitt as an organizer with Hospital Workers 1199, and later was the Teamsters Director of Organizing. In the new introduction Bob emphasizes the destruction to democracy that the thirty years of Levitt style union- busting has wrought on the working class in the U. S. Thirty years later the corporate attack on workers’ rights has resulted not only in decreased union membership but also in a less democratic nation.

that he and his industry used and is still using to defeat what should be the US workers’ right to a union.

Labor Law firms are not supposed to engage in union - busting per se. But the company can hire a union - busting firm to do the dirty work, while the law firm advises the company on its legal rights and goes before the labor board. This was something new, the union buster and the labor law breaker taking over from the thugs and the Pinkertons.

Employers can recognize and bargain with a union - once majority status is proved either through a petition, card check or an NLRB election. They don’t have to call in the lawyers and the union busters. So Levitt’s campaigns rely on first scaring the boss into believing that the union is a threat to the company and to the boss’ control over the company and then taking control from the boss and creating an anti-union force among the lower management to defeat the union at the NLRB election.

The key to his union busting is the fact that lower management is sometime included and sometimes excluded by the Labor Board from the bargaining unit. Levitt uses this layer of the workforce as his shock troops. Foremen are brow beaten into submission and those who resist are either fired or quit. This is a hole in US labor law that Marty expanded to a crater.

The first story begins in the coal mining towns of West Virginia and it sets a pattern for all the rest of his campaigns. This is the first instance of his use of foremen to defeat the union. It is a vicious campaign dividing families and townspeople across southeastern Ohio.

Marty’s book was written describing the period of  growth of union busting firms and provides a description of the back stabbing of each other during the 1980’s. We see how union busting went from targeting small businesses and industry specific companies to going after whole industries - especially the hospital and restaurant industry.

The 1980’s saw a rebirth of union organizing in the health care industry, and the restaurant and food service industry. The unions he targeted were the 1199 and the Culinary Union. The health care workplaces were mostly non-profits and public hospitals.

There is a brief and telling episode where he tries out “going to the other side.” He fails as a union organizer.  He can’t take the hard work, long hours and the nitty gritty life style.  Without the personal glory and wild life style he falls into a deep depression. But this is no ‘on the road to Damascus’ moment. He pulls himself out of it and goes right back to union busting.

“He hurt a lot of people in my industry.” Hansen said of me. “He deprived a lot of people of medical plans and vacations. I know my industry. Workers make small amounts of money. They’re people who live on low incomes who do not have a lot in life. . . .With a union, at least they’d have a medical and dental plan; at least they wouldn’t be discharged unfairly without someone looking into it. At least they’d have someone to turn to, to grieve to in case they’ve been wronged. Now they have no help.”

The union buster’s campaigns can be beat.

The Campaign at Copeland Nursing Home was where Levitt and the owner pulled out all the dirty tricks. Again he stays in the background and encourages the worst instincts of the owner and top management.The nursing home workers are almost all women. Many have been there for years.

Levitt began by dividing the staff. They got a decision separating the LPNs  from the rest of the staff.  Here again is this huge flaw in US labor law - that the LPN’s could be ruled out of the unit, as part of management even though the LPNs were the ones who had started the union drive.

Despite his campaign the company loses the election - but they don’t stop there, and go on to drag out the bargaining to discourage the union and the workers. The company commits a slew of unfair labor practices and bargaining in bad faith. But even though the union wins its cases the decisions drag out for so long that the workers quit or get discouraged. Eventually the union has to withdraw. Again many lives are ruined, but the boss gets his way. Dragging out first contract negotiations is a tactic many employers are using today.

During this same time we had an organizing drive at a medium sized electronics plant that was 95% women. There was a single owner who hired a notorious anti-labor firm in Springfield, Mass.

Our UE campaign at Wesco Electronics began in 1976. We finally won a first contract after a 20 week strike in February 1980.

UE organizers never lost touch with the women workers - although the wait for the Labor Board decision nearly killed the campaign. We had to re-organize the shop once we won the decision which was interestingly enough over whether the “group leaders” should be in the bargaining unit or not. They were ruled out because the employer and his lawyers had used them as an anti-union force. - exactly as this book describes.

Different than the Copeland story, the workers here realized early on that the fight was not just over low wages and lack of benefits, but also over the existence of the union or not. Looking back on this - this was really incredibly perceptive of them. How many first contract fights are fought over the union security clause?

These women learned that the power of the boss depended on their cooperation. If they withdrew it they could win. They perfected the art of short walkouts. And they finally convinced the union organizers that a strike was necessary in order to succeed.

We won the strike after just about whole Western Mass labor movement, at least 400 strong, showed up on the picket line one foggy morning. Three days later the Governor sent in the head of Labor and Industries in Mass to oversee an agreement between the company and the union.  The workers were right, it took a strike.

Why read it today? It’s good to read this book to get the inside look at the bosses’ campaign. Read it to learn their tricks and understand there’s no limit to how low they will go. These tactics are still in use. Take for example the fake mail box that Amazon set up on its property to confuse and steal the workers’ ballots!

There have been some favorable labor law changes since Marty Levitt days.

Holding of the union elections in a quicker time frame is very important in that it keeps the company from delaying the elections while they get their anti-union campaigns going.

The use of mail in ballots instead of voting on company property all on the same day is also a step in the right direction. When an election takes place on one day on company property, the company has the fear advantage. One place in Connecticut piped in the sounds of bombers and bombs being dropped over the loudspeakers on the day of the election. This was the company exercising their “right of free speech.”

Union organizers are still not allowed access to workers at work.

The dirty tricks that bosses play on workers will continue until there is a fundamental change in US Labor Law. Most fundamental would be the repeal of Taft - Hartley and corporate “personhood.” The law favors the powerful.

I believe there is a growing union consciousness among workers.

There will still be difficulties at large blue collar factories because the threat to close the plant is hard to overcome. Yet the frustration with working conditions doesn’t disappear. Workers will look for ways to fight back.

Meanwhile there are successes at workplaces that can’t be shut down or shipped out of the country.

Objectively we now are in a period of labor shortage and people have higher expectations. This favors organizing.

There needs to be solidarity between union struggles. By showing up at workplaces on strike, Bernie Sanders is connecting struggles between workplaces. Workers need support and communication with each other.

The good news is that workers don’t have to wait for the union to show up to act like a union.

The NLRA in it’s pure form gives all workers the right to self-organization. *

We see it at Starbucks and Amazon and the Southern Workers Assembly, and probably many other worksites that we never hear about. Even without an organizing drive there is the right of self-organization.

You can act like you already have a union. A union organizing drive is like a little revolution. Get out ahead of the boss and the union buster. The NRLA gives us the right. We need to take it.

Sec. 7. [§ 157.] Employees shall have the right to self-organization, to form, join, or assist labor organizations, to bargain collectively through representatives of their own choosing, and to engage in other concerted activities for the purpose of collective bargaining or other mutual aid or protection, …