The Blockade Against Cuba Turned 60

It’s easy to say, but it’s been six very hard decades that began with disconcerting lightness and the belief that the United States government’s blockade of Cuba would not last long – a couple of years, maybe. 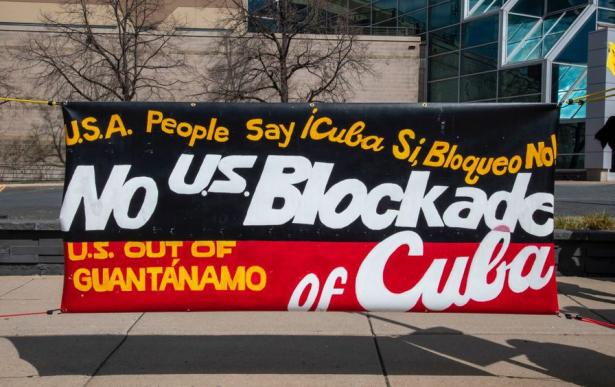 Protesters in Minneapolis demand that the Biden administration take immediate action to reverse the actions taken by the Trump administration to deepen the economic war against Cuba., Michael Siluk / Education Images // The Nation

On February 2, 1962, U.S. President John F. Kennedy called his press secretary, Pierre Salinger, and gave him an urgent task: “I need a lot of [Cuban] cigars.” “How many, Mr. President?” “About a thousand,” Kennedy replied. Salinger visited the best-stocked stores in Washington and got 1,200 H. Upmann Petit Corona cigars rolled by hand in the fertile plains of Pinar del Río, at the western end of the island.

“The next morning, I walked into my White House office at about 8 a.m., and the direct line from the President’s office was already ringing,” Salinger told Cigar Aficionado magazine years later. “‘How did you do, Pierre?’ he asked, as I walked through the door. ‘Very well,’ I answered. … Kennedy smiled, and opened up his desk. He took out a long paper which he immediately signed. It was the decree banning all Cuban products from the United States. Cuban cigars were now illegal in our country.”

The media outlets of the time reported quite accurately what that decision meant. The Nation wrote: “Cuba’s economy… depended on the United States for such essential items as trucks, buses, bulldozers, telephone and electrical equipment, industrial chemicals, medicine, raw cotton, detergents, lard, potatoes, poultry, butter, a large assortment of canned goods, and half of such staple items in the Cuban diet as rice and black beans. … A nation which had been an economic appendage of the United States was suddenly cut adrift; it was as if Florida had been isolated from the rest of the country, unable to sell oranges and cattle or to bring in tourists, gasoline, automobile parts, or Cape Canaveral rockets.”

There were 657 days between February 3, 1962—when Kennedy issued a blockade on trade between the US and Cuba—and November 22, 1963, when he was assassinated.

Kennedy was killed before he could burn his arsenal of Cuban cigars one by one and before the negotiation agenda was finalised to perhaps reverse or ease the blockade, a process that was underway at the time of the Dallas assassination.

Two key factors that determined the start of negotiations were the failure of the Bay of Pigs invasion of Cuba in April 1961—the invaders had to be exchanged for food and tractors—and the 1962 October missile crisis that involved the U.S., the USSR and Cuba. A memorandum sent by Gordon Chase, National Security Council specialist for Latin American affairs, to McGeorge Bundy, national security adviser to President Kennedy, on April 11, 1963, cynically recommended: “If the sweet approach [to Castro] turned out to be feasible and, in turn, successful, the benefits would be substantial.”

Kennedy’s attempts at rectification were of no use, nor were the calls, not just for elementary justice, but for pragmatism. Dozens of analysts, officials and even former U.S presidents have since demanded sanity to prevail in order to prevent the punishment imposed on the Cuban people from these continuing embargoes, which are based on the sadistic drive, inertia or simply on the arrogance of a bunch of politicians. But Washington has continued to show vital signs of not backing down. Wayne Smith, who was head of the U.S. Interests Section in Havana and one of the strongest voices against the blockade imposed unilaterally by his country, concluded that Cuba seems to have “the same effect on American administrations that the full moon has on werewolves.”

Those who were born when Kennedy, with his hidden reasons and a secret stash of cigars, signed Executive Order 3447, which decreed a total blockade on Cuba, now have grandchildren and even great-grandchildren. Some of those Cubans have died and many will die without knowing how a country works under normal conditions—the old one or the new one with COVID-19, it no longer matters. They will never understand how it has been possible for the U.S. to act against millions of people for so long and with so much hatred, a hatred without limits or rational explanation.

[Rosa Miriam Elizalde is a Cuban journalist and founder of the site Cubadebate. She is vice president of both the Union of Cuban Journalists (UPEC) and the Latin American Federation of Journalists (FELAP). She has written and co-written several books including Jineteros en la Habana and Our Chavez. She has received the Juan Gualberto Gómez National Prize for Journalism on multiple occasions for her outstanding work. She is currently a weekly columnist for La Jornada of Mexico City.]