film ‘Drive My Car’ Review: A Director Takes Your Heart for a Spin 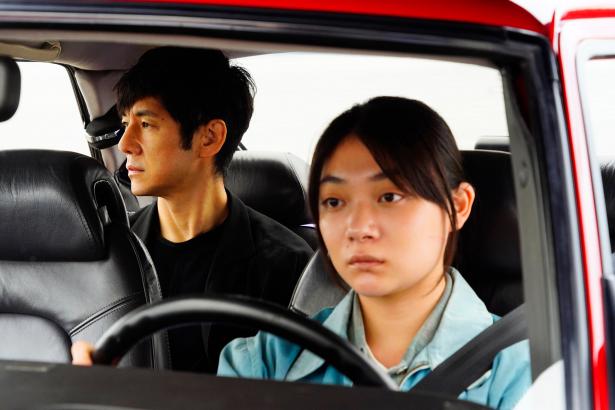 Partway through “Drive My Car,” a character you don’t especially like or trust looks directly at the camera. He’s in the dimly lit back seat of a car, his eyes shining with emotion, and talking to someone you care about greatly. But the camera just holds on this guy, forcing you to look at him and hear him out. When characters break the fourth wall, the effect can be comic or alienating or conspiratorial. Here, though, the direct address has a shock of empathy, the kind you feel at the precise moment when the thin veil separating us from other people falls and you see, really see, their humanity.

A quiet masterpiece from the Japanese director Ryusuke Hamaguchi, “Drive My Car” is a story about grief, love and work as well as the soul-sustaining, life-shaping power of art. (Another of his movies, “Wheel of Fortune and Fantasy,” opened earlier this year — he’s someone to pay attention to.) Its protagonist, Yusuke (Hidetoshi Nishijima, a low-key heartbreaker), is an actor and theater director who endures a great loss not long after the story opens. He continues working and working, specifically on a production of “Uncle Vanya” that reminds you that life is truly brilliant at imitating art. Many movies offer pat life lessons; this one speaks about what it means to go on living.

When the movie opens, Yusuke is cozily settled in with his wife, Oto (Reika Kirishima), a television writer. Demonstrably affectionate and mutually supportive, the couple have wrapped themselves in a tender cocoon of warmth, desire and creative labor. Their sexual life is fulfilling, too, and informs her fiction writing in surprising ways. After they make love, Oto likes to tell Yusuke stories that have come to her at the moment of climax, narrating them to him as if she were in a trance. The next day, though, she often forgets the story and needs him to remind her of what she said. Sometimes, he makes suggestions for the stories, a continuation of the erotic-aesthetic bond between them.

“Drive My Car” is primarily based on a thin, blunt short story by Haruki Murakami. For the movie, Hamaguchi (who wrote the script with Takamasa Oe) has greatly expanded on the story’s central dynamic, which turns on a sexist widowed actor and the much-younger female driver who motors him around in his cherished Saab. In doing so, she breaches his emotional and psychological carapace without seeming to change him. In the movie, the actor is also known for mounting multilingual productions of plays like “Waiting for Godot” in which the players perform in different languages — one speaks in Japanese, another in Korean and so on — that are translated in supertitles.

The movie is roughly divided into four sections. The first serves as an informal prelude and sketches in Yusuke and Oto’s life as a couple: the casual orderliness of their home, the sincerity of their touch, the anguish of a shared tragedy and the complexities of their relationship that tremble below the placid surface. One of the most charming quirks of their life together is that she makes audiocassette recordings of the plays he’s working on that he listens to while driving his vintage red Saab. He pops in the tape and, as her voice fills the car, he drives — he insists on driving himself, a habit that’s refracted in the title — listening to her and listening to the plays, having already committed both to heart.

A virtuoso of intimacy, Hamaguchi has a thing for cars or, more specifically, the familiarities their tight spaces create. You spend a lot of time in Yusuke’s Saab, a pristine beauty. The car is at once his refuge and escape, a place where he works and thinks, as well as a sturdily built emblem of his being. The occasional bird’s-eye shots of it tooling along the highway amid a sea of blandly colored vehicles suggest that its popping red is unusual and perhaps a display of vanity or pride for its otherwise outwardly unassuming owner. Over time, the car will serve as a confession box and therapist’s couch for its drivers and passengers alike, a place for confidences and communion.

That Yusuke hasn’t upgraded the analog sound system in his carefully maintained car says something about his character, the mysteries of which are whittled away over the course of the movie. The second and longest section involves the production of “Uncle Vanya,” which he directs during a residency in Hiroshima. There, against his wishes, he is given a driver, Misaki (a fantastic Toko Miura), a closemouthed young woman with mournful eyes, and he begins rehearsals. It goes slowly, at times amusingly, as he insists to the bewildered, frustrated cast that they focus on the text. And so they do, reading words that, line by line, shed light on Yusuke and the world he’s made.

The car also proves to be a stage for Yusuke, the space where his life is rocked first by one of his actors, Koshi (Masaki Okada), a disgraced young television star whose promontory features look hewed by a backwoods Picasso. The TV actor once worked with Oto and had a relationship with her. Hamaguchi likes to stack the narrative decks, and he’s fearless about folding in contrivances, which he naturalizes by not overworking them. Yusuke knows about this relationship (the actor doesn’t know that he knows) and has perversely cast the younger man against type, selecting him to play the sad, angry, 47-year-old Vanya — a role perfect for Yusuke, who knows it too well.

“Drive My Car” sneaks up on you, lulling you in with visuals that are as straightforward as the narrative is complex. The camerawork is unflashy to the point of near-plainness though all the parts — the people, interiors, landscapes — look good, recognizably so. The movie is well-lighted and cleanly edited and, for the most part, unembellished with flourishes that might draw attention away from the story. This unforced minimalism only makes the bold strokes more pronounced: a surprising superimposition, say, or the chromatic jolt of the red car in snow. And then there are the paired images of Oto’s reflection in a mirror. In the first, she is alone as she walks by it; in the next, Yusuke is, unbeknown to her, gazing at her reflection as she has sex with another man.

How Yusuke sees Oto for who she is and how, in turn, he sees himself is a thread that gracefully winds through the movie to the final sections, in which the narrative center of gravity shifts from Yusuke to Misaki, affecting both characters deeply and bringing “Drive My Car” to its shattering close. By the time you get there — at this point, I should mention the movie runs three effortless hours — everything seems imperceptibly blurred, the divide between onstage and off, as well as the different roles that everyone plays in their personal and professional lives. They all have played them to perfection partly because these roles are also who they are: husband, wife, lover, driver.

Hamaguchi’s touch — delicate, precise, restrained, gentle — overwhelms in increments. His reserve is essential to his visual and narrative approach but also feels like a worldview. Things happen, though often quietly, creating a flowing, crystalline ordinariness that, in its very naturalness and in its lack of dramatic inflection, strengthens the realism. He keeps tears and drama in check, letting emotion seep in after the heavy blow and in the meaningful silences which, like the negative space of a painting, complete the picture. In time, all that feeling becomes an inundation in a movie that formally embraces and perfectly distills Chekhov’s observation that “When a man spends the least possible number of movements over some definite action, that is grace.”

Drive My Car is screening on HBO Max and in theaters. Check your local listings.