The US 20-year war and occupation in Afghanistan, waged to avenge the September 11 terrorist attacks that killed nearly 3,000 people, has taken the lives of more than 71,000 Afghani and Pakistani civilians. 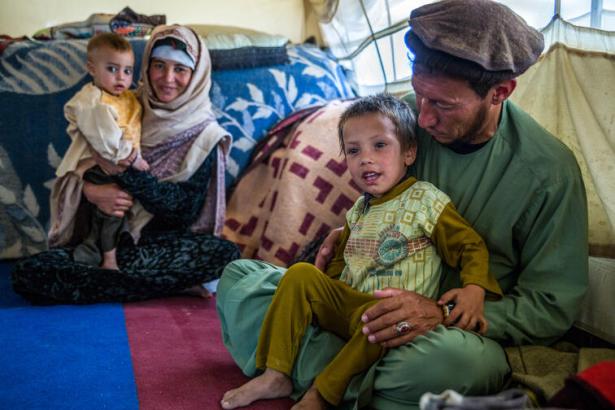 Over 18 million people in Afghanistan require humanitarian aid, a number that has doubled since 2000 and represents nearly half the country.,Photo: International Rescue Committee (IRC)

The people of Afghanistan?

The US 20-year war and occupation in Afghanistan, waged to avenge the September 11 terrorist attacks that killed nearly 3,000 people, has taken the lives of more than 71,000 Afghani and Pakistani civilians.  A massive increase in civilian deaths ensued there in 2017 when the US military loosened its rules of war regarding airstrikes.  The country is left littered with unexploded ordnance, which kills and injures unknowing civilian adults and children as they move through their land.  The war also forced six million people to flee their homes, almost half as refugees to other countries.

None of this tragedy of the US war in Afghanistan has been in our mainstream news.  Could it be because at the war’s onset, George W Bush advised Americans to “go shopping” and forget about our war in a poor, remote, non-Western country?

During the war in Afghanistan, the US poured money into the country, money that flowed to oligarchs within regimes our government propped up, and to US military contractors, civilian contractors and warlords, for which there is little to show.  The US Special Inspector General for Afghanistan Reconstruction concluded, in his March 2021 assessment of the 20 year war, that much of the [US] spending has been “woefully out of touch at best, and delusional at worst” and much of it has gone to simple graft and corruption by US and Afghan profiteers.

When the US fled Afghanistan eight months ago, most foreign funding upon which the country was dependent for its GDP and 75 percent of its public funding also left.   According to the UN, Afghanistan has a 41% rate of stunting in children under five, among the world’s highest; and one-half the population of 40 million are suffering a record level of acute hunger.

After fleeing the country, the US quickly enacted economic sanctions against the brutal Taliban government.  These sanctions, inevitably borne by the Afghani people, “are on track to take the lives of more civilians in the coming year than have been killed by 20 years of warfare,” according to economist Mark Weisbrot.

Why is our news media silent on the US inhumane economic war there?

On February 11, 2022 President Biden signed an Executive Order to free $7 billion of frozen Afghani assets held in the Federal Reserve in NYC – savings of ordinary citizens not the Taliban government - and to split them between humanitarian aid for starving, sick Afghanis and legal fees of surviving relatives of the September 11 attacks.  Even the former US-supported Afghan President Hamid Karzai has called on Biden to reverse his decision and to return the full $7 billion to the Afghanistan Central Bank.

His words: "Withholding money or seizing money from the people of Afghanistan...is unjust and unfair and an atrocity against the Afghan people."

Half of Afghani citizens were born after the US launched war in Afghanistan. And yet, they are being punished by our homicidal economic sanctions and the subsequent theft of Afghani citizens’ savings in the Federal Reserve Bank in New York City.  Further, the Afghani people did not plan and attack the United States on 9/11.  It was primarily Saudi Arabian members of al-Qaeda, who hatched their plot in Germany out of anger for the US setting up military bases in their country and perpetrating war in the Middle East.  No Afghan people were involved.  Why didn’t the US use the CIA, noted for sleuth, entrapment, and assassination of its targets in foreign countries and governments, to capture or, more to their habit, assassinate, Osama bin Laden?

The logical and ethical response to compensating 9/11 victims’ families would be to withhold the millions of dollars in military aid that our government gives to Saudi Arabia each year to finance their purchase of U.S. military training and equipment, and to use that “blood money” for the 9/11 victims.   Doing so, the US would also limit our government’s collusion with Saudi Arabia in the most extreme humanitarian crisis today – the military war on Yemen with its bombing of hospitals and schools and blockades of food and medical supplies.  Two-thirds of the 20 million Yemeni people are in critical of food, shelter, medicines, and health care.

And why is none of this in our news media?

Because the greatest military empire in history failed in Afghanistan?

Because poor, darker-skinned, Muslim, non-Western people on the  other side of the world are of no financial or security value to our government?

Because the 700 Congressional lobbyists for the weapons industry have turned Congressional attention to their new business opportunity – war in Ukraine?

Because the US government has now subordinated its War on Terror to a testosterone-filled Great Power conflict with Russia and China, now inflamed by Russia’s threat of using nuclear weapons.

Empires destroy themselves in the effort to prove they are indestructible.
Reinhold Niebuhr

[H Patricia (Pat) Hynes, retired Professor of Environmental Health, is a board member of the Traprock Center for Peace and Justice.  Her new book, Hope But Demand Justice, is published by Haley’s Publishing.]