In the confirmation hearings of Judge Ketanji Brown Jackson, Sen. Ted Cruz cited the famous “I Have a Dream” speech to suggest King would have opposed race-conscious policies. It was a striking moment, in a day full of them. 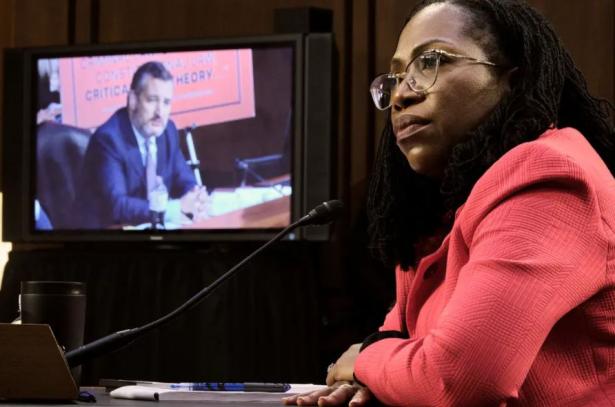 Senator Ted Cruz's comments at the hearings for Judge Jackson are part of a long tradition of conservatives’ invoking Dr. King to oppose affirmative action and other race-based remedies.,T.J. Kirkpatrick for The New York Times

It was a striking moment, in a day full of them.

On Tuesday afternoon, during the confirmation hearings of Judge Ketanji Brown Jackson, Senator Ted Cruz quoted the Rev. Dr. Martin Luther King Jr.’s dream of a world where children would be judged “not by the color of their skin but by the content of their character” — before sharply questioning Judge Jackson about her views on critical race theory.

He held up two books by Ibram X. Kendi that he said had been assigned or recommended at a school where she is on the board of trustees, describing their contents as “the exact opposite” of Dr. King’s famous “I Have a Dream” speech.

“Are you comfortable,” he asked, “with these ideas being taught to children?”

It was a salvo aimed squarely at today’s pitched battles over critical race theory, a once obscure academic discipline that has emerged as a potent political weapon for the right. From the floor of the Senate to the report of the Trump administration’s 1776 Commission, it has been painted as the antithesis of the colorblind America that Dr. King supposedly wanted to create.

But some scholars who tuned into the hearings said they saw a familiar distortion.

Tommie Shelby, a professor of philosophy and African-American studies at Harvard and editor of “To Shape A New World,” a collection of essays about Dr. King’s political philosophy, said those who “selectively pluck” words from Dr. King’s speech during the 1963 March on Washington have not “studied it very closely.”

“It is clear from the broader speech that King thought we were far from realizing that ideal and that, in the meantime, some race-conscious policies would be necessary,” he said.

The moment also crystallized a long-running political battle over the legacy of Dr. King, and his most famous words.

“The right has looked for arguments to push back against affirmative action and what they see as reverse racism,” said the historian Nicole Hemmer, the author of “Messengers of the Right,” a study of conservative media. “And quoting King, instead of a white person, gains that sheen of moral cover.”

Critical race theory is increasingly being used by conservatives as shorthand for various teachings about race. It originated in the late 1980s at Harvard Law School, where both Mr. Cruz and Judge Jackson (whom he also questioned about her views of The New York Times’s 1619 Project) were students at the time.

Critical race theory is a critique of the legal system, and the ways that inequalities can be enforced and perpetuated by seemingly colorblind laws. But it is not, its proponents argue, a rejection of Dr. King’s ideas.

In an opinion article in The Los Angeles Times in January, the legal scholar Kimberlé Crenshaw, one of the founders of the movement, called Dr. King “a critical race theorist before there was a name for it.”

She cited Dr. King’s 1967 book “Where Do We Go From Here?,” in which he wrote that “the doctrine of white supremacy was embedded in every textbook and preached in practically every pulpit,” entrenched as “a structural part of the culture.”

“Contrary to countless assertions from the right, King did not endorse colorblindness,” she wrote. “It wasn’t the remedy for dismantling the ugly realities that white supremacy had produced.”

Though politicians across the political spectrum post quotes from Dr. King every year on Martin Luther King Jr. Day, conservatives (and some liberals) have not always liked Dr. King. In his lifetime he was frequently denounced as a Communist and an “outside agitator,” and subjected to extensive surveillance by the Federal Bureau of Investigation.

A few months before King’s assassination in April 1968, a Harris Poll showed that he had a disapproval rating of 75 percent — at least 25 points higher than in 1963, the year of the March on Washington.

The image started to soften after his assassination, but his reputation remained low among many on the right. In 1983, the Republican senator Jesse Helms led a filibuster of the proposed federal holiday in his honor, calling King an advocate of “action-oriented Marxism” that was “not compatible with the concepts of this country.”

President Reagan ultimately came out in favor of the holiday, which he signed into law that year. In 1986, at a ceremony in the capital where Coretta Scott King was present, he urged America “to never, never abandon the dream” of “a truly colorblind America.”

That emerging ideology of colorblindness, which cast affirmative action as a form of “reverse racism,” was embraced by some Black intellectuals, including Shelby Steele, the author of the 1990 best seller “The Content of Our Character,” and the economist Thomas Sowell.

The 2003 Supreme Court decision in Grutter v. Bollinger, which backed affirmative action, accelerated conservatives’ embrace of the “content of their character” quote, Ms. Hemmer said, with help from the expansion of conservative talk radio and blogs. “There’s more space for it to multiply,” she said. “Suddenly everyone seems to be using it.”

There was also a broader effort to claim Dr. King and his morality-based politics for the right. In “Martin Luther King’s Conservative Legacy,” a 2006 paper for the Heritage Foundation, Carolyn Garris urged conservatives to lay claim to Dr. King’s message, and push back against “decades of its appropriation by liberals.”

“King was no stalwart Conservative, yet his core beliefs, such as the power and necessity of faith-based association and self-government based on absolute truth and moral law, are profoundly conservative,” she wrote. “Modern liberalism rejects these ideas, while conservatives place them at the center of their philosophy.”

Others on the right have used the sanctification of Dr. King as a way to bolster the reputations of the Founders, at a time when attention to their slaveholding was tarnishing their cultural prestige. The conservative commentator Dinesh D’Souza, in a 2021 video, invoked Dr. King’s speech as a vindication of Thomas Jefferson and the words of the Declaration of Independence, while casting Supreme Court Justice Thurgood Marshall and the Black historian John Hope Franklin as allied with the opponents of true equality.

A large photo of Dr. King at the March on Washington also appears on page 2 of the report of the 1776 Commission, established to promote “patriotic education,” which describes the “I Have a Dream” speech as “rejecting hateful stereotyping based on racialized group identity,” and casts affirmative action as a betrayal of Dr. King.

The right has also embraced one of Dr. King’s nieces, Alveda King, a conservative evangelical Trump supporter who visited the White House in 2019.

In the early 1990s, Ms. Hemmer said, Democratic politicians were still quoting the “content of their character” passage in the context of events like the police beating of Rodney King. But today, she said, liberals and progressives are more likely to quote other texts, like Dr. King’s 1963 “Letter From Birmingham Jail,” in which he wrote that the biggest obstacle to racial progress wasn’t the Ku Klux Klan but “the white moderate who is more devoted to ‘order’ than to justice.”

And among scholars, there is far greater attention to the radicalism of Dr. King, who is not seen as antithetical to figures like Malcolm X. They emphasize his opposition to the Vietnam War and his support for the 1968 Poor People’s Campaign and what some see as his backing for reparations. The context may have changed after the passages of the civil rights and voting rights acts, and the emergence of the Black Power moment. But Professor Shelby said it’s not just a matter of separating the early and later Dr. King.

He said many would benefit from reading Dr. King’s book “Why We Can’t Wait,” written in 1963. “Our society has been doing something special against the Negro for hundreds of years,” Dr. King wrote. “How then can he be absorbed into the mainstream of American life if we don’t do something special for him for now?”

[Jennifer Schuessler is a culture reporter covering intellectual life and the world of ideas. She is based in New York. @jennyschuessler]