The Russian invasion of Ukraine spotlights the interconnected crises facing humanity—and the need to link global movements if we are to survive them.

March 31, 2022 Max Elbaum Convergence
Printer friendly
‘Everything Has Changed Except Our Thinking’ – Ukraine Is a Wake Up Call About Today’s World Published March 31, 2022 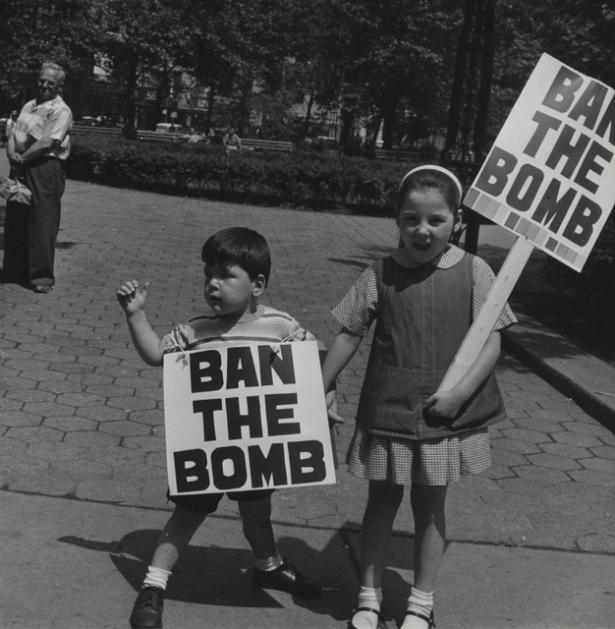 Today the wakeup call comes from the war in Ukraine. Once again a siren screams an important warning about the world we live in.

Three-quarters of a century ago, after the U.S. dropped atomic bombs on Hiroshima and Nagasaki, Albert Einstein wrote in a telegram:

“The unleashed power of the atom has changed everything except our modes of thinking, and we thus drift toward unparalleled catastrophe.”

For the first time since our species numbered in the hundreds, humankind had achieved the means of self-annihilation. Nuclear war could wipe out the human race. And every war in the nuclear age became a slippery slope that could lead to nuclear conflict.

Einstein insisted the nuclear age qualitatively changed reality for human society. War had simply become too dangerous to wage. It was now a mortal threat to all potential combatants, “winners” as well as losers.”

Conflict between nations and classes with different interests would inevitably continue. (Einstein was a socialist and analyzed politics through that lens.) But the new reality of war meant that a check had to be placed on how struggle would be conducted. Humanity’s common interests––above all in sheer human survival––had to take precedence over each of our particular concerns.

Einstein’s view resonated with many intellectuals, peace activists, and important parts of the Left. Proposals were floated to put all nuclear weapons under the control of the United Nations, or to build on the level of global unity forged in the fight against fascism to create some kind of world government.

Such sentiments threatened a U.S. elite obsessed with creating a post-war global architecture that would ensure the “American Century” (that is, U.S. imperial hegemony). So marginalizing them was part of the crusade by the U.S. and its junior partners to isolate the socialist world and dominate the rest of the planet. Washington’s messaging switched from anti-fascist themes to warnings about an “iron curtain” and a “Communist menace.” Coups, bribes, and interventions were used to install or prop up pro-U.S. regimes abroad. McCarthyism and Taft-Hartley were deployed to crush dissent at home.

And for 40 years, the world was locked in the straitjacket of the Cold War.

All-out military confrontation between the U.S. and the Soviet Union thankfully never came to pass, though the Cuban Missile Crisis showed that the threat was always just beneath the surface. And war was only “cold” in (most of) the global North. Across Asia, Africa, the Middle East, and Latin America the guardians of empire never hesitated to use force when needed to deny the “darker nations” the rights to self-determination, democracy and economic development that had been emblazoned on their banners in the war against fascism.

During the Cold War, the guardians of empire never hesitated to deny the nations of the global south the rights to self-determination, democracy and economic development.

Meanwhile other dangers grew. Exploitation of the global South, even when carried out without resort to war, weakened or destroyed local economies. Inequality between the “developed” and “underdeveloped” world grew. The spoilation of the planet for profit increasingly damaged the natural environment.

The first warnings about the danger of climate change were sounded in the 1950s. By the 1980s, major sections of the scientific community were alarmed and calling for action.

To most of the world’s surprise, an unexpected voice emerged to echo––and expand upon––Einstein’s ideas. Mikhail Gorbachev, chosen to head the Soviet Communist Party and Soviet state in 1985, published his book Perestroika: New Thinking for Our Country and the World in 1987. The next year he put forward his ideas in a major speech to the United Nations that was broadcast worldwide.

Perestroika (“restructuring”) was Gorbachev’s plan to radically reform the stagnant Soviet economy and democratize its politics. His proposed “new way of thinking” focused on the common problems that by the 1980s threatened the rights, health and very survival of humanity: nuclear war, environmental catastrophe, and levels of inequality and poverty that produced famine, mass migration, and violent social explosions. According to Gorbachev, new thinking meant that governments of all political persuasions needed to work together to address these problems. Political and ideological conflict­­––including between capitalism and socialism––would continue. But it had to be conducted without resort to war of any kind.

Gorbachev accompanied his message with a series of disarmament proposals and withdrew all Soviet forces from Afghanistan. These steps sparked a resurgence of peace activism across the globe. They put pressure on Washington to respond, and even the bellicose Reagan administration was placed on the defensive by a series of dramatic summits, including one where Reagan was forced into a serious discussion of complete nuclear disarmament.

The fact that the government of a powerful, nuclear-armed state was arguing that its top foreign policy priority was fostering international cooperation to resolve common human problems changed the dynamics of global politics. It opened possibilities for emerging from the Cold War with momentum toward a sustainable and peaceful human future.

But within the Soviet Union, Gorbachev’s restructuring plan foundered. The result was not a renewal of Soviet socialism but the collapse of the USSR. The reasons for this failure are still hotly debated on the Left. But whatever led to the failure of perestroika, once again new thinking about the contemporary world got buried along with it. The Cold War did end. But the prospect of moving toward a better world was submerged under an orgy of capitalist triumphalism. The 1991 US war against Iraq was Washington’s signal to the world that the sole remaining superpower was hell bent on domination by any means necessary. Welcome to the New World Order.

Combined with the seemingly unstoppable ascent of neoliberal economics, all this produced jubilation in the U.S. ruling class in the 1990s. But the rest of humanity––and the natural world––did not get the “End of History” memo authored by then-Neocon Francis Fukuyama. Resistance to injustice continued (this was the period of a Left-led anti-globalization movement). And the dangers to humanity grew. New military technologies––from drones to nuclear weapons “modernization”­­––made war ever more destructive. Wars, intrastate violence, environmental degradation, and capitalist “accumulation by dispossession” devastated entire communities, with famine, extreme poverty, and unprecedented migration following in its wake.

A whole series of wake-up calls ensued. But so far, the powers-that-be have responded to them through the prism of the very same “old thinking” that got the world into its current mess to begin with. The right-wing populist and ethno-nationalist movements that have gathered so much initiative in recent decades have done even worse, offering toxic brews of racism, sexism, homophobia, and outright denial of facts and science in place of acknowledging reality in the modern world.

The terrorist crime against humanity on September 11, 2001 showed how dangerous it is to live in a world where small groups of people can inflict so much damage and throw the entire world into turmoil. But rather than recognize that such acts are only to be expected when whole populations are denied dignity and a decent life, 9/11 was treated as a problem of pathological evildoers to be solved by military force. Is it any surprise that Washington’s actions based on this notion increased rather than diminished the use of terrorism in the world?

Like the 1980s AIDS epidemic, the global SARS outbreak and even more dramatically the still-raging COVID pandemic offer undeniable proof that we live in a deeply interconnected world where there is security for all or security for none. But the dominant response is not a heightened sense of human interdependence and mutual responsibility, much less decisive action to combat disease and unsafe environments worldwide. Rather it is scapegoating, vaccine apartheid, and an outbreak of hyper-individualism and conspiracism so strong that it persists even as its advocates die in higher numbers than other sectors of the population.

The 1980s AIDS epidemic, the global SARS outbreak and the still-raging COVID pandemic offer undeniable proof that we live in a deeply interconnected world where there is security for all or security for none.

And now, the Russian invasion of Ukraine spotlights the whole interconnected package of dangers to humanity. The bombs and missiles massacring Ukrainian civilians fill TV screens with evidence of the destructiveness of modern warfare. How to keep the flow of oil and gas into Western Europe emerges as a preoccupation of Western governments, underscoring how little government policies have changed even after decades of urgent warnings about the perils of dependence upon fossil fuels. President Putin putting Russia’s nuclear forces on alert has again made the danger of nuclear war a topline political concern.

Unfortunately, but predictably, the U.S. and most of its allies are responding with increases in the military budget combined with blatant racist hypocrisy. The current outpouring of self-righteous moral outrage about white Europeans dying at the hands of Russians is in sharp contrast to the dominant attitude when even larger numbers of Iraqi, Yemeni, Mozambican, Indonesian, Vietnamese, and other non-white civilians died at the hands of Western armies and their puppets. And why are sanctions against Russian aggression considered not just appropriate but praiseworthy while sanctions against Israel’s apartheid regime are considered illegitimate if not downright anti-Semitic?

The only positive elements one can identify in the Ukraine crisis are that, first, the tenacious Ukrainian resistance shows again that invasions by big powers don’t go well in today’s world. And second, this war is sparking another upsurge in grassroots peace activism across the globe, including within Russia. The forces arrayed against militarism are still far, far weaker than we need them to be. But the movements that have emerged in numerous countries­­––and the prospect of links among them––gives us something to build on. So does the increasing recognition on all sides that movements against war and climate change and those fighting for democracy and economic, racial and gender justice need to be closely linked to one another.

Together these movements have the potential to awaken ever-broader layers of the population in their respective countries and spark a wave of activism that addresses the realities of the 21st-century world. But as they develop, getting further than the earlier save-humanity surges of Einstein’s era or Gorbachev’s requires breakthroughs in their fight for governing power, especially in one or more of the world’s larger and more powerful states. It will take a new synergy between grassroots global movements and states that think in new ways about international relations to defeat the exploiting classes and reactionary movements that “would hurt all mankind just to save their own.”

Mike Davis has written a searing assessment of what the war in Ukraine tells us about the major powers on today’s world stage, and the bleak prospects for humanity when none consistently lead in a struggle for global cooperation, especially concerning climate change and peace. It can be read as a Cassandra-like prophecy of doom. But the defeats and afflictions that followed Cassandra’s warnings in ancient Greece occurred because her prophecies were not believed because of the curse placed on her by the god Apollo.

We are not bound by such a curse to dismiss the kind of wakeup call Davis and many others are sounding today.

[Max Elbaum has been active in peace, anti-racist and radical movements since the 1960s. He is a member of the Convergence Magazine editorial board and the author of Revolution in the Air: Sixties Radicals Turn to Lenin, Mao and Che (Verso Books, Third Edition, 2018).]