Amazon warehouse workers at the company’s JFK8 facility on Staten Island made history today, voting in favor of the Amazon Labor Union. Is this not glorious? 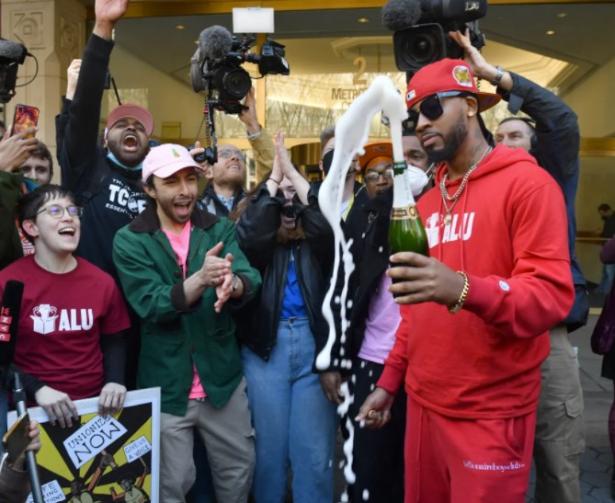 Amazon warehouse workers at the company’s JFK8 facility on Staten Island made history today, voting in favor of the Amazon Labor Union. With 2654 votes for the union and 2131 against, the warehouse becomes the first unionized workplace in the company’s history. It’s astounding that a group of current and former warehouse workers, who are unaffiliated with any existing labor unions, came out on top against one of the world’s most powerful corporations. It’s all the more shocking when you consider the lengths Amazon went to in its attempts to prevent this exact outcome.

In recent months, Amazon tried to overwhelm workers with anti-union messaging, held captive audience meetings to convince them to vote against the union, hired an influential Democratic consultant to produce anti-union materials, told workers that the union organizers are “thugs,” and sent the NYPD to arrest organizers for trespassing when they showed up to deliver lunch to workers on break.

The company and its leading flacks have also pushed back against criticism of how Amazon, whose profits doubled more than 200 percent in the pandemic, treats its warehouse employees who have to deal with grueling hours, lack of paid sick leave, and dangerous working conditions. Last year, in what has to be the biggest “epic clapback” fail in living memory, Amazon mocked a congressman for highlighting the fact that Amazon employees have been forced to pee in bottles while working.

(Amazon managed to outdo itself a week later when it wrote an entire blog post admitting that its workers are, in fact, forced to pee in bottles while on the job.)

Top Amazon flack and former Obama administration lackey Jay Carney even put himself out there on multiple occasions to defend the honor of a trillion-dollar company whose workers are, as the company unequivocally admitted, forced to pee in bottles while on the job. Here’s Carney, ever the consummate smarmster, piping up in “confusion” to defend Amazon’s decision to fire union organizer Christian Smalls after he organized a walkout to demand safe COVID-19 working conditions.

Around this same time, Amazon was discussing plans for how to discredit Smalls and his effort to organize the facility. Vice reported on leaked notes from an internal Amazon leadership meeting in which company execs talked about how to smear Smalls, who they called “not smart or articulate,” as part of a PR strategy to make him “the face of the entire union/organizing movement.” Smalls, along with current Amazon worker Derrick Palmer, are two of the leaders of Amazon Labor Union.

Here was Smalls on Friday after the vote:

Is this not glorious? Does this not bring a happy little tear to your eye? Does is not make you want to yell, HELL YEAH FUCK YEAH EAT SHIT JEFF BEZOS WOOOOOOOO!

Amazon is handling the news as can be expected, saying in a statement that it is “disappointed with the outcome of the election in Staten Island” and that it may file objections based on activities they witnessed in the election. It did not specify which supposed actions it objected to, though it is clear that the Amazon reps who were on site during the ballot counting did not have a good time.

Here’s hoping that the workers who won today’s vote have a fantastic weekend, and that the Amazon executives and flacks who did everything in their power to stop a union from forming, but failed spectacularly for all the world to see, continue to drink mad water.

Laura Wagner is a staff writer for Defector.com.

Defector is an employee-owned, subscription-based sports and culture website brought to you by the former staffers of Deadspin. Our goal is to create a financially stable and independent publication. Please join us.