When almost all of Gaza’s water is not fit for human consumption because of a deliberate Israeli strategy, one can understand why Palestinians continue to fight back as if their lives are dependent on it; because they are.

April 6, 2022 Ramzy Baroud Counterpunch
Printer friendly
Gaza’s Forthcoming Crisis Might Be Worse Than Anything We Have Ever Seen Published April 6, 2022 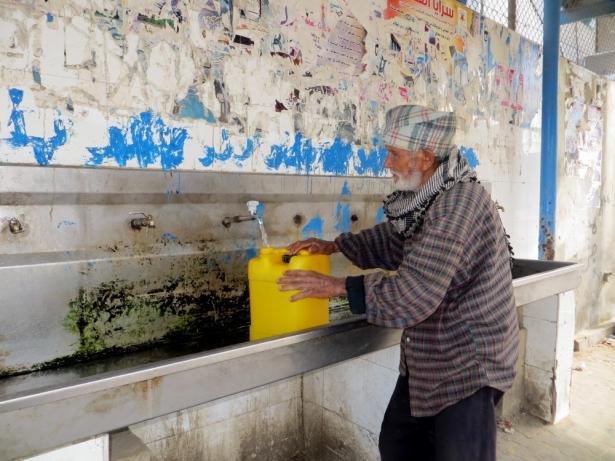 “The water is back,” one family member would announce in a mix of excitement and panic, often very late at night. The moment such an announcement was made, my whole family would start running in all directions to fill every tank, container or bottle that could possibly be filled. Quite often, the water would last for a few minutes, leaving us with a collective sense of defeat, worrying about the very possibility of surviving.

This was our life under Israeli military occupation in Gaza. The tactic of holding Palestinians hostage to Israel’s water charity was so widespread during the First Palestinian Intifada, or upirising, to the extent that denying water supplies to targeted refugee camps, villages, towns or whole regions was the first measure taken to subdue the rebellious population. This was often followed by military raids, mass arrests and deadly violence; but it almost always began with cutting Palestinians off from their water supplies.

Israel’s water war on the Palestinians has changed since those early days, especially as the Climate Change crisis has accelerated Israel’s need to prepare for grim future possibilities. Of course, this largely happens at the expense of the occupied Palestinians. In the West Bank, the Israeli government continues to usurp Palestinian water resources from the region’s main aquifers – the Mountain Aquifer and the Coastal Aquifer. Frustratingly, Israel’s main water company, Mekorot, sells stolen Palestinian water to Palestinian villages and towns, especially in the northern West Bank region, at exhorbitant prices.

Aside from the ongoing profiteering from water theft, Israel continues to use water as a form of collective punishment in the West Bank, while quite often denying Palestinians, especially in Area C, the right to dig new wells to circumvent Israel’s water monopoly.

According to Amnesty International, Palestinians in the occupied West Bank consume, on average, 73 liters of water a day, per person. Compare this to an Israeli citizen, who consumes approximately 240 liters of water a day, and, even worse, to an illegal Israeli Jewish settler, who consumes over 300 liters per day. The Palestinian share of water is not only far below the average consumed by Israelis, but is even below the recommended daily minimum of 100 liters per capita as designated by the World Health Organization (WHO).

As difficult as the situation for West Bank Palestinians is, in Gaza the humanitarian catastrophe is already in effect. On the occasion of the World Water Day on March 22, Gaza’s Water and Environmental Quality Authority warned of a ‘massive crisis’ should Gaza’s water supplies continue to deplete at the current dangerous rate. The Authority’s spokesman, Mazen al-Banna, told reporters that 98 percent of Gaza’s water supplies are not fit for human consumption.

The consequences of this terrifying statistic are well known to Palestinians and, in fact, to the international community as well. Last October, Muhammed Shehada of the Euro-Med Monitor, told the 48th UN Human Rights Council session that about one-quarter of all diseases in Gaza are caused by water pollution, and that an estimated twelve percent of deaths among Gaza’s children are “linked to intestinal infections related to contaminated water.”

But how did Gaza get to this point?

On May 25, four days after the end of the latest Israeli war on Gaza, the charity Oxfam announced that 400,000 people in besieged Gaza have had no access to regular water supplies. The reason is that Israeli military campaigns always begin with the targeting of Palestinian electric grids, water services and other vital public facilities. According to Oxfam, “11 days of bombardment … severely impacted the three main desalination plants in Gaza city.”

It is important to keep in mind that the water crisis in Gaza has been ongoing for years, and every aspect of this protracted crisis is linked to Israel. With damaged or ailing infrastructure, much of Gaza’s water contains dangerously high salinity levels, or is extremely polluted by sewage and other reasons.

Even before Israel redeployed its forces out of Gaza in 2005 to impose a siege on the Strip’s population from land, sea and air, Gaza had a water crisis. Gaza’s coastal aquifer was entirely controlled by the Israeli military administration, which diverted quality water to the few thousand Jewish settlers, while occasionally allocating high saline water to the then 1.5 million Palestinian people, granted that Palestinians did not protest or resist the Israeli occupation in any way.

Nearly 17 years later, Gaza’s population has grown to 2.1 millions, and Gaza’s already struggling aquifer is in a far worse shape. The United Nations Children’s Fund (UNICEF) reported that water from Gaza’s aquifer is depleting due to “over-extraction (because) people have no other choice”.

“Worse, pollution and an influx of seawater mean that only four percent of the aquifer water is fit to drink. The rest must be purified and desalinated to make it drinkable,” UNICEF added. In other words, Gaza’s problem is not the lack of access to existing freshwater reserves as the latter simply do not exist or are rapidly depleting, but the lack of technology and fuel that would give Palestinians in Gaza the ability to make their water nominally drinkable. Even that is not a long term solution.

Israel is doing its utmost to destroy any Palestinian chances at recovery from this ongoing crisis. More, it seems that Tel Aviv is only invested in making the situation worse to jeopardize Palestinian chances of survival. For example, last year, Palestinians accused Israel of deliberately flooding thousands of Palestinian dunums in Gaza when it vented its southern dams, which Israel uses to collect rain water. The almost yearly ritual by Israel continues to devastate Gaza’s ever-shrinking farming areas, the backbone of Palestinian survival under Israel’s hermetic siege.

The international community often pays attention to Gaza during times of Israeli wars; and even then, the attention is mostly negative, where Palestinians are usually accused of provoking Israel’s supposed defensive wars. The truth is that even when Israel’s military campaigns end, Tel Aviv continues to wage war on the Strip’s inhabitants.

Though militarily powerful, Israel claims that it is facing an ‘existential threat’ in the Middle East. In actuality, it is the Palestinian existence that is in real jeopardy. When almost all of Gaza’s water is not fit for human consumption because of a deliberate Israeli strategy, one can understand why Palestinians continue to fight back as if their lives are dependent on it; because they are.

Ramzy Baroud is a journalist and the Editor of The Palestine Chronicle. He is the author of five books. His latest is “These Chains Will Be Broken: Palestinian Stories of Struggle and Defiance in Israeli Prisons” (Clarity Press, Atlanta). Dr. Baroud is a Non-resident Senior Research Fellow at the Center for Islam and Global Affairs (CIGA), Istanbul Zaim University (IZU). His website is www.ramzybaroud.net