Is COVID More Dangerous Than Driving? How Scientists Are Parsing COVID Risks.

The coronavirus remains new enough and its long-term effects unpredictable enough that measuring the threat posed by an infection is a thorny problem. How people perceive risk is subjective. 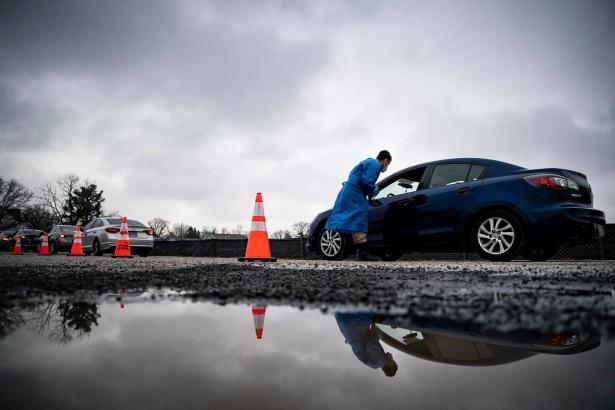 Even as deaths from the first Omicron surge plummeted, the virus was still the third-leading cause of death in the United States last month, behind only heart disease and cancer., Al Drago for The New York Times

Like it or not, the choose-your-own-adventure period of the pandemic is upon us.

Mask mandates have fallen. Some free testing sites have closed. Whatever parts of the United States were still trying to collectively quell the pandemic have largely turned their focus away from community-wide advice.

Now, even as case numbers begin to climb again and more infections go unreported, the onus has fallen on individual Americans to decide how much risk they and their neighbors face from the coronavirus — and what, if anything, to do about it.

For many people, the threats posed by Covid have eased dramatically over the two years of the pandemic. Vaccines slash the risk of being hospitalized or dying. Powerful new antiviral pills can help keep vulnerable people from deteriorating.

But not all Americans can count on the same protection. Millions of people with weakened immune systems do not benefit fully from vaccines. Two-thirds of Americans, and more than a third of those 65 and older, have not received the critical security of a booster shot, with the most worrisome rates among Black and Hispanic people. And patients who are poorer or live farther from doctors and pharmacies face steep barriers to getting antiviral pills.

These vulnerabilities have made calculating the risks posed by the virus a fraught exercise. Federal health officials’ recent suggestion that most Americans could stop wearing masks because hospitalization numbers were low has created confusion in some quarters about whether the likelihood of being infected had changed, scientists said.

“We’re doing a really terrible job of communicating risk,” said Katelyn Jetelina, an epidemiologist at the University of Texas Health Science Center at Houston. “I think that’s also why people are throwing their hands up in the air and saying, ‘Screw it.’ They’re desperate for some sort of guidance.”

To fill that void, scientists are thinking anew about how to discuss Covid risks. Some have studied when people could unmask indoors if the goal was not only to keep hospitals from being overrun but also to protect immunocompromised people.

Others are working on tools to compare infection risks to the dangers of a wide range of activities, finding, for instance, that an average unvaccinated person 65 and older is roughly as likely to die from an Omicron infection as someone is to die from using heroin for a year-and-a-half.

But how people perceive risk is subjective; no two people have the same sense of the chances of dying from a year-and-a-half of heroin use (about 3 percent, by one estimate).

And beyond that, many scientists said they also worried about this latest phase of the pandemic heaping too much of the burden on individuals to make choices about keeping themselves and others safe, especially while the tools for fighting Covid remained beyond some Americans’ reach.

“As much as we wouldn’t like to believe it,” said Anne Sosin, who studies health equity at Dartmouth, “we still need a society-wide approach to the pandemic, especially to protect those who can’t benefit fully from vaccination.” 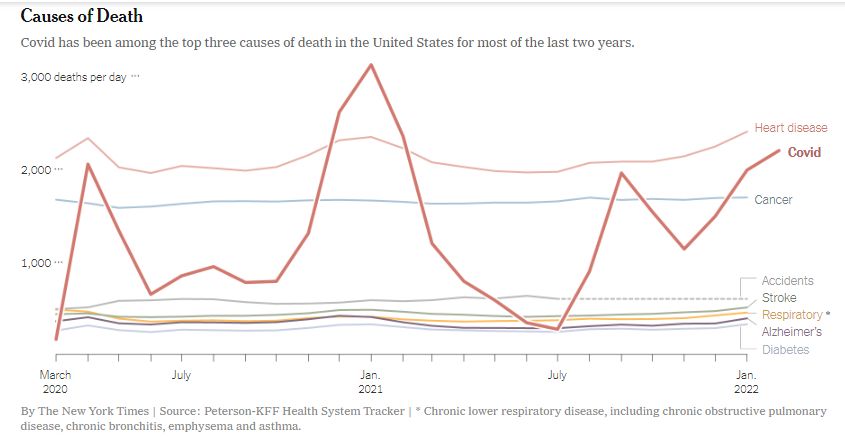 While Covid is far from America’s only health threat, it remains one of its most significant. In March, even as deaths from the first Omicron surge plummeted, the virus was still the third-leading cause of death in the United States, behind only heart disease and cancer.

How much virus is circulating in the population is one of the most important measures for people trying to gauge their risks, scientists said. That remains true even though case numbers are now undercounting true infections by a large margin because so many Americans are testing at home or not testing at all, they said.

Even with many cases being missed, the Centers for Disease Control and Prevention now places most of the Northeast at “high” levels of viral transmission. In parts of the region, case numbers, while far lower than during the winter, are nearing the peak rates of autumn’s Delta variant surge.

Much of the rest of the country has what the C.D.C. describes as “moderate” levels of transmission.

The amount of circulating virus is critical because it dictates how likely someone is to encounter the virus and, in turn, roll the dice on a bad outcome, scientists said.

That is part of what makes Covid so different from the flu, scientists said: The coronavirus can infect many more people at once, and with people more likely to catch it, the overall chance of a bad outcome goes up. 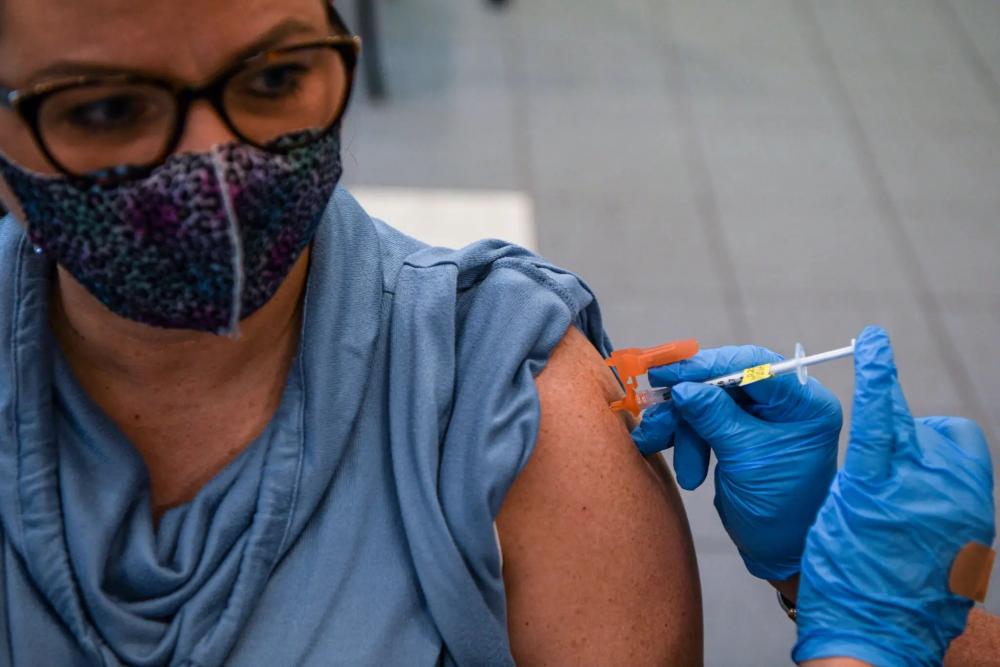 One estimate showed that an average 40-year-old vaccinated over six months ago faced roughly the same chance of being hospitalized after an infection as someone did of dying in a car crash in the course of 170 cross-country road trips. Kenny Holston for The New York Times

“We’ve never seen flu prevalence — how much of it there is in the community — in the numbers we’ve seen with Covid,” said Lucy D’Agostino McGowan, a biostatistician at Wake Forest University.

Even two years into the pandemic, the coronavirus remains new enough, and its long-term effects unpredictable enough, that measuring the threat posed by an infection is a thorny problem, scientists said.

Some unknown number of people infected will develop long Covid, leaving them severely debilitated. And the risks of getting Covid extend to others, potentially in poor health, who may consequently be exposed.

Still, with far more immunity in the population than there once was, some epidemiologists have sought to make risk calculations more accessible by comparing the virus to everyday dangers.

The comparisons are particularly knotty in the United States: The country does not conduct the random swabbing studies necessary to estimate infection levels, making it difficult to know what share of infected people are dying.

Dr. Jetelina, who has published a set of comparisons in her newsletter, Your Local Epidemiologist, said that the exercise highlighted how tricky risk calculations remained for everybody, epidemiologists included.

For example, she estimated that the average vaccinated and boosted person who was at least 65 years old had a risk of dying after a Covid infection slightly higher than the risk of dying during a year of military service in Afghanistan in 2011. She used a standard unit of risk known as a micromort, which represents a one-in-a-million chance of dying.

A micromort is a unit of measurement for risk. One micromort represents an estimated one-in-a-million chance of dying. Efforts to make the same estimates for Covid can vary widely depending on methodology. 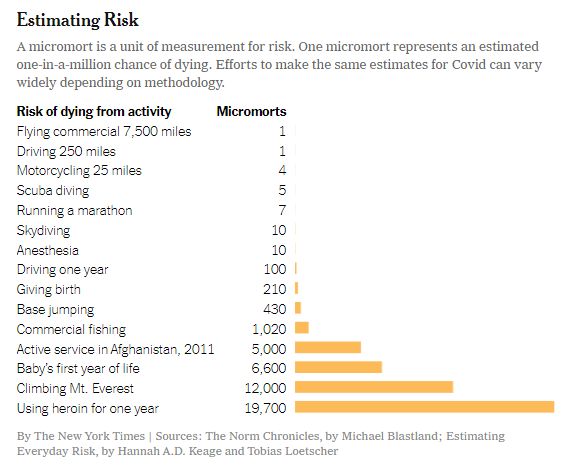 But her calculations, rough as they were, included only recorded cases, rather than unreported and generally milder infections. And she did not account for the lag between cases and deaths, looking at data from a single week in January. Each of those variables could have swung estimates of risk.

“All of these nuances underline how difficult it is for individuals to calculate risk,” she said. “Epidemiologists are having a challenge with it as well.”

For children under 5, she found, the risk of dying after a Covid infection was about the same as the risk of mothers dying in childbirth in the United States. That comparison, though, highlights other difficulties in describing risk: Average numbers can hide large differences between groups. Black women, for example, are almost three times as likely as white women to die in childbirth, a reflection in part of differences in the quality of medical care and of racial bias within the health system.

Cameron Byerley, an assistant professor in mathematics education at the University of Georgia, built an online tool called Covid-Taser, allowing people to adjust age, vaccine status and health background to predict the risks of the virus. Her team used estimates from earlier in the pandemic of the proportion of infections that led to bad outcomes.

Her research has shown that people have trouble interpreting percentages, Dr. Byerley said. She recalled her 69-year-old mother-in-law being unsure whether to worry earlier in the pandemic after a news program said people her age had a 10 percent risk of dying from an infection.

Dr. Byerley’s estimates showed, for instance, that an average 40-year-old vaccinated over six months ago faced roughly the same chance of being hospitalized after an infection as someone did of dying in a car crash in the course of 170 cross-country road trips. (More recent vaccine shots provide better protection than older ones, complicating these predictions.)

For immunocompromised people, the risks are higher. An unvaccinated 61-year-old with an organ transplant, Dr. Byerley estimated, is three times as likely to die after an infection as someone is to die within five years of receiving a diagnosis of stage one breast cancer. And that transplant recipient is twice as likely to die from Covid as someone is to die while scaling Mount Everest.

With the most vulnerable people in mind, Dr. Jeremy Faust, an emergency physician at Brigham and Women’s Hospital in Boston, set out last month to determine how low cases would have to fall for people to stop indoor masking without endangering those with extremely weakened immune systems.

He imagined a hypothetical person who derived no benefit from vaccines, wore a good mask, took hard-to-get prophylactic medication, attended occasional gatherings and shopped but did not work in person. He set his sights on keeping vulnerable people’s chances of being infected below 1 percent over a four-month period.

To achieve that threshold, he found, the country would have to keep masking indoors until transmission fell below 50 weekly cases per 100,000 people — a stricter limit than the C.D.C. is currently using, but one that he said nevertheless offered a benchmark to aim for. 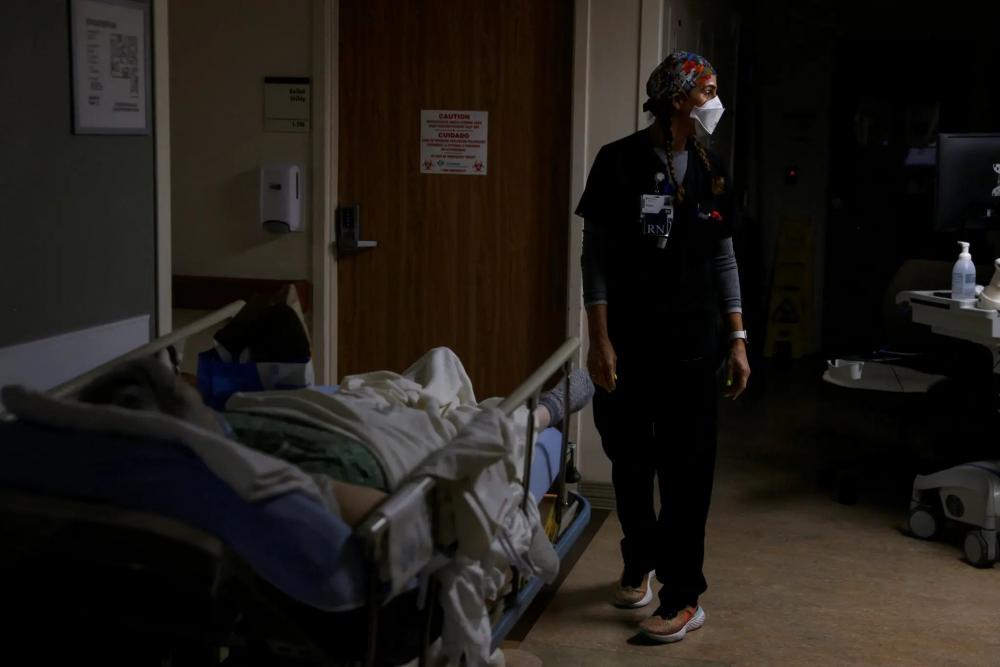 A nurse with a Covid patient in the emergency room of St. Mary Medical Center in Apple Valley, Calif. Shannon Stapleton/Reuters

For people with immune deficiencies, the end of collective efforts to reduce infection levels has been unnerving.

“All of the layered protections we’ve been talking about for the entire pandemic, each of those is being stripped away,” said Marney White, a professor of public health at Yale University, who is immunocompromised. She said families in her local school district were encouraging each other not to report Covid cases. “It’s impossible to calculate risk in these situations,” she said.

Dr. Ashish K. Jha, the White House Covid response coordinator, said that the administration had helped mitigate people’s risks by making rapid tests and masks easier to get and by partnering with clinics to quickly prescribe antiviral pills. Better communication was needed to distribute preventive medicine for immunocompromised people, he said.

“We need a system that can very readily deliver therapeutics for them,” he said. “That’s very much the responsibility of government.”

Preparing better for the present surge — and future ones — could make people’s risks more manageable, even if it does not eliminate them, scientists said. By ventilating indoor spaces, guaranteeing paid sick leave, delivering booster shots to people’s doorsteps and making it easier to get treated, the government could help people make choices with less fear of catastrophe, they said.

“We should be setting infrastructure in place that allows us to respond rapidly when we have the next wave,” said David Dowdy, an epidemiologist at Johns Hopkins University.

“We should be training people that, when those waves hit, there are certain things we’re going to have to do,” he added, like imposing short-term mask mandates. “You can then live your life in respect of that possibility — but not in fear that it might happen at any minute.”

Establishing the Toll of the Pandemic

In the United States

Benjamin Mueller is a health and science reporter. Previously, he covered the coronavirus pandemic as a correspondent in London and the police in New York. @benjmueller