The Washington Bulb Company has agreed to the demands of workers after a three-day strike. 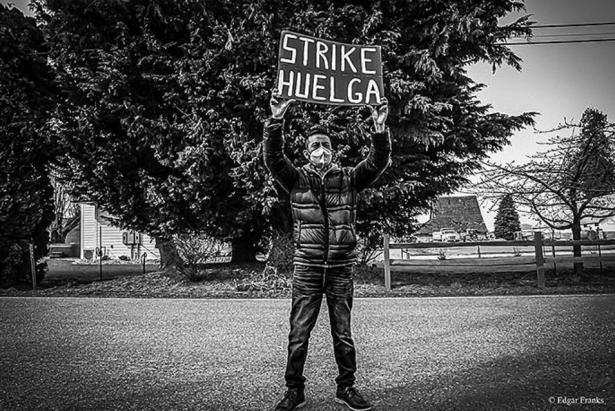 Eight days after more than seventy tulip and daffodil farm workers in Mount Vernon, Washington, went on strike on March 22, their employer, the Washington Bulb Company, and its retail division RoozenGaarde, have agreed to offer higher wages and safer working conditions. The strike, the first in the company’s history, occurred nearly a week before the annual Skagit Valley Tulip Festival was scheduled to begin.

The Skagit Valley Tulip Festival, which started as a three-day festival for local growers to showcase their tulips in 1984, has evolved into a month-long April celebration with a street fair and recreational events to observe the millions of tulip bulbs blooming across acres of rainbow-colored fields in Skagit County. The event draws hundreds of thousands of tourists annually and is expected to bring in at least $65 million in revenue for the county based on figures from previous years. April is a particularly profitable time for RoozenGaarde, an official sponsor of the tulip festival.

The Washington Bulb Company was purchased in 1955 by a Dutch bulb farmer named William Roozen. Thirty years after Roozen bought the company, RoozenGaarde was established as the company’s retail division and display garden. This family-owned enterprise now farms on more than 1,600 acres of land (500 acres of daffodils, 350 acres of tulips, 150 acres of irises, and 600 acres of wheat), making them the largest domestic grower of tulip, daffodil, and iris bulbs in North America.

As the Washington Bulb Company and RoozenGaarde reap their profits, the farm workers who plant and harvest the colorful bounties in the flower fields want their bread and roses, too. Farm workers walked off the job on the morning of March 22, reportedly after a disagreement with management over how bonuses were being distributed.

Edgar Franks, political director for the independent farm workers union Familias Unidas por la Justicia, tells The Progressive that relations between the workers and management had been wilting for quite some time.

“It had been building up for the last couple of years,” Franks says. “This was the thing that pushed it to the level it went to last week. There were a myriad of issues. This [the bonus discrepancies] was just one more thing and the workers wanted to put a stop to it.”

Workers at the Washington Bulb Company labor in the fields for long hours in harsh weather, endure backbreaking labor, and are exposed to pesticides among other hazards. Some have reported sores and lesions on their hands, often attributable to “contact dermatitis” caused by daffodils and tulips, which, as the American Academy of Dermatology Association notes, “are capable of producing skin reactions.” The problem is so common with harvesting such flowers that it has even earned the nickname “daffodil pickers’ rash.” The cost of safety gear, such as gloves and goggles, was being paid for out of the workers’ pockets. 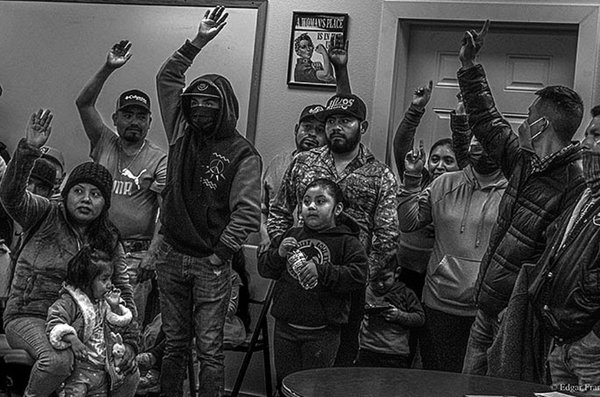 The workers reached out to Familias Unidas por la Justicia for help. Formed in 2013, the organization helped blaze the trail in the fight against poor working conditions, abuse, and wage theft at the berry farm at Sakuma Bros. Farms and Processing in Burlington, Washington. In 2016, it won a union contract guaranteeing a base hourly wage of $15 an hour, full collective bargaining rights, and protections against unjust discipline and retaliation. The union represents more than 400 Triqui, Mixteco, and Spanish-speaking farmers at Sakuma Bros. The Washington Bulb Company workers were also joined in their struggle by Community to Community Development (C2C), a grassroots organization led by women of color based in Bellingham, Washington.

Familias Unidas por la Justicia and C2C organizers took to social media to rally support for the strike with photos, videos, and tweets accompanied by the hashtags “justice for farmworkers” and “huelga,” the Spanish word for “strike.” Strikers elected a committee to represent them and present their demands to company management on March 23.

For three days, nearly 100 workers and their allies gathered outside RoozenGaarde and formed a picket line where people displayed flags, banners, and signs. The tulip workers’ demands included guaranteed eight-hour workdays, improved sick leave, access to safety gear, safer applications for pesticides, and “bonuses to be calculated by bunches of flowers picked regardless of quality” as reported by The Seattle Times.

“The majority of these workers are people from Indigenous communities in Mexico,” Franks says. “They have their own languages, their own traditions. We want to emphasize their leadership role in organizing, not just this strike but also our union. It’s very important to bring up that it’s the people who always have the most to lose, those who can’t speak Spanish or English. They’re willing to fight and risk putting everything on the line.”

On the evening of March 24, tulip workers and allies met at the United Steelworkers Hall (USW Local 12-591) where members of the public were invited to witness “this historic event.” Washington State Representative Debra Lekanoff, a Democrat, was in attendance as a neutral observer when ninety-three Washington Bulb Company workers voted to join Familias Unidas por la Justicia and signed union cards. At the meeting, the workers voted to suspend the strike when company representatives agreed to begin negotiations. The seven members elected to the worker committee engaged in the first round of negotiations with company representatives at Roozengaarde headquarters on March 25. After presenting the workers’ demands, negotiations resumed on March 28.

“We feel that negotiations have been pretty positive,” Franks says. “There’s been some good faith efforts from management to try to resolve this issue. I also think the strike brought up a lot of issues that management wasn’t aware of.”

Familias Unidas por la Justicia assisted in the talks with the company, but it was the workers and their elected committee who took charge, voting on the original list of terms before negotiating with the company.

On March 31, the company presented to the worker committee a document with the conditions agreed upon.

“As far as reading over the document,” Franks says, “the workers pretty much got everything.”

The company agreed to modify and update its policies on worker safety and to provide personal protective equipment such as boots, rain gear, gloves, and eye protection. The company also agreed to add raises to the bonus structure regarding how flowers are gathered, when previously workers were only paid the state’s minimum wage.

“For far too long, this country has taken the essential work performed by farm workers for granted,” Andrew Walchuk, staff attorney for the national nonprofit organization Farmworker Justice, tells The Progressive in an email. “The agricultural industry’s shameful legacy of slavery and racism still affects workers today. Farmworkers are among the lowest paid workers in the country and face exclusion from many basic federal workplace protections, such as overtime pay and the right to organize.”

Walchuk credits Skagit County workers for continuing “a long tradition of farmworker leaders who have courageously spoken out to shine a light on these injustices.”

Federal and state laws are tilted in favor of agricultural employers, leaving the workers vulnerable to exploitation and abuse. Farm workers are excluded from National Labor Relations Act protections, including the right to organize a union. The Fair Labor Standards Act, which excluded farm workers until 1966, and the Migrant and Seasonal Agricultural Worker Protection Act offer some basic protections but still fall short.

“Many of the rules of labor don’t apply to agricultural workers,” Franks says. “I think now workers are realizing that. The system has been unfair even in the legal realm. The only way to change it is to organize and take part in strikes and other activities to take their case to the public. If politicians and lawmakers don’t listen, the public will.”

The announcement of the agreement was made on the eve of Cesar Chavez Day, a national holiday honoring the legendary union organizer and co-founder of the United Farm Workers. Just as poignantly, negotiations occurred during Farmworker Awareness Week.

“It was totally unplanned,” Franks says. “It’s just the way things worked out. Reflecting on it, with farm worker organizing, we still have a long way to go from the days of Cesar Chavez and Dolores Huerta. What happened here in Skagit County, this is our contribution to the movement and hopefully will cause a ripple effect of workers organizing, wanting to be unionized, direct actions, all of these things that have been a tradition not just to farm workers but the labor movement.”

Mike Kuhlenbeck is a freelance journalist and National Writers Union member based in Des Moines, Iowa.