A military romance suffers under the weight of KGB surveillance in this restrained period drama set in Soviet-era Estonia. 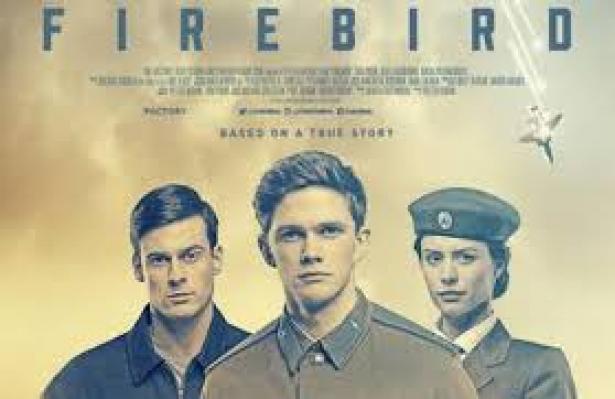 Not that we needed a reminder, but Russia’s recent human rights violations — while flagrant — are sadly not a new phenomenon. David France’s “Welcome to Chechnya” documented the horrific genocide being waged against LGBTQ people in what is now a Russian Republic, a terrifying sign of what could lay in store for LGBTQ Ukrainians. Taking an altogether different tack, the stately period drama “Firebird” tells the true story of an ill-fated military romance between two men in Soviet-occupied Estonia during the late 1970s and early ’80s.

Based on a memoir by Sergey Fetisov, the steamy Cold War drama honors this lost chapter of gay history with a handsome rendering that only occasionally stumbles under the weight of historical accuracy. The film’s tragic throughline won’t break any molds, but with smoldering performances by its two strapping young leads, the target audience is unlikely to care.

Despite the heat of its title, “Firebird” begins in the water as three lithe bodies splash playfully in a dark sea. The horseplay is interrupted when two uniformed men point guns their way, a stark reminder that a military base is no place for fun. A fresh-faced recruit with his head in the clouds, the gentle Sergey (Tom Prior) nurses dreams of becoming an actor. He shows promise as a pilot, however, and is assigned as convoy to a newly arrived, hotshot lieutenant named Roman (Oleg Zagorodnii. Intrigued by Roman’s skillful flying and smooth confidence, Sergey is invited to his private dark room when the men discover a shared interest in photography. After many charged glances and rousing brushes with danger, they give in to their desires with little resistance.

The film runs on a steady rhythm of danger and pleasure, or tension and release. The opening scene’s drama repeats itself almost cyclically, with the stakes climbing higher each time. Another swimming scene, this one more erotic, is shot from afar, under the watchful eye of an unknown meddler who brings an anonymous report up the line. After a trip to the opera, which gives the film its title, the couple is almost caught at a checkpoint, though it’s unclear by whom and why they must hide. Pressed breathlessly against each other in a forest trench, they erupt into a passionate kiss once in the clear.

Each rapturous high is followed by a heart-stopping low, and as soon as they consummate their love they are interrupted by an ominous knock on the door. The prying major (Margus Prange) has his eye on Roman, and never misses an opportunity to remind him the KGB is watching. The threat of a Russian jail looms large over Roman, who feels responsible for Sergey as well. Greasy and heavyset, the major is a broad caricature of a Russian bureaucrat, and his heavy presence, while necessary, lacks much subtlety or creativity.

Understanding the dire consequences for them both, Roman eventually marries Sergey’s friend Luisa (Diana Pozharskay), a lovely girl with medical school ambitions. As the years fly by, Sergey leaves the military to attend drama school in Moscow, forgetting about Roman until he shows up unannounced on a three-month placement. Despite his better judgment, Sergey moves in with Roman and the two enjoy a brief renaissance before Luisa surprises them on Christmas.

The chronology of the film feels a bit clunky at times, likely because of the creative team’s commitment to honoring Fetisov’s story. “Firebird” is the narrative directorial debut of Estonian filmmaker Peeter Rebane, who cut his teeth on music videos and a feature documentary on Robbie Williams. Rebane wrote the script with Prior, who has had supporting roles in “The Theory of Everything” and “Kingsman: The Secret Service.” As first-time screenwriters, their script hits the requisite plot points in a predictable and straightforward manner, kind of like a biopic about someone nobody has heard of.

The first half of “Firebird” feels out of step with the second, as the film jumps from the contained and regimented world of the military base to a relatively liberated 1980s Moscow with little explanation. Once Sergey grows his hair, opting for a kind of feathered David Hasselhoff look, the rules of the world are difficult to track. A raucous party in what is obviously their shared apartment is unceremoniously interrupted by a friend catching them kissing. Once vibrant and ambitious, Luisa is relegated to the forgotten wife role, and her suspicions never come to fruition.

Though set and shot in Estonia, “Firebird” is performed in English, with each actor bringing their own accent to the words. While this obviously made the most sense as Prior is English and Zagorodnii is Ukrainian, the anachronistic choice contributes to a general sense of displacement one feels around a story that is very rooted in a specific time and place. But Prior and Zagorodnii are both so watchable, and their chemistry so electric, that it’s easy to get swept away in their romance. Historical accuracy be damned.