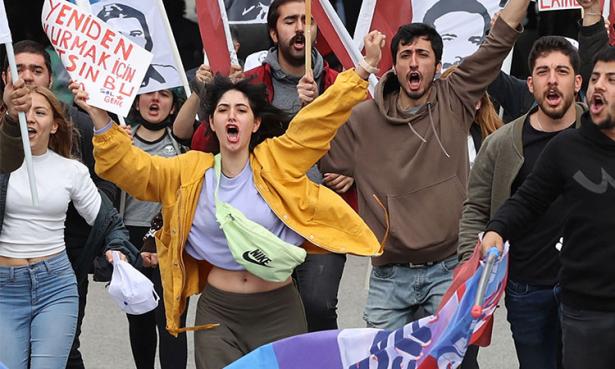 Workers have been participating in monumental struggles since the previous year’s May Day, making this year’s celebration well-deserved. Peoples Dispatch looks back on some of the most important labor struggles of this past year.

It is a time of high emotion for participants and their causes, and Sunday’s May Day marches were no different with police at the ready as street demonstrations commemorated International Workers’ Day. In this year’s May Day messages, national leaders and union officials called for peace and also warned that Russia’s war could spread further in Europe.

We need to think beyond how imperial powers should best manage competition over their respective spheres of interest. A better question for us might be, how can West, Central and Eastern Europe, including Russia, be made into a common home rather than a geopolitical battleground?

Until recently, Sinn Féin struggled to pick up transfers from voters beyond their nationalist heartlands – and, in turn, encouraged their loyal voters not to transfer to anyone else. Now, a new alliance is emerging, which looks set to transform the constitutional politics of the UK.

Most Sri Lankan businesses and schools were closed, and public transport was interrupted on Thursday as workers joined a general strike calling for the president to step down over the island’s growing economic and political crisis.

Despite national defeat, the French left overwhelmingly won the votes of one key demographic: French Muslims. According to IOFP polls, 69% of Muslims voted for Mélenchon, while Le Pen received a measly 7%. What does the overwhelming endorsement of this group mean for the future of the French left?

excerpted from an article in Resumen Latinoamericano (Buenos Aires), translation by Portside

(Read the original in Spanish here.)

The III Continental Assembly of ALBA Movements, held from April 27 to 30 in Buenos Aires, culminated with the reading of a final document demanding the continuation of the struggle for the integration of peoples and their advance against imperialism, and a closing act that brought together militants from Latin America.

The importance and experiences of popular organization in achieving the right to land and work were highlighted. Every speaker highlighted the role of international articulation, the popular economy [informal market], and the experiences of feminist movements. Some highlights:

Esteban Castro, the secretary general of Argentina’s Unión de Trabajadores de la Economía Popular (UTEP), gave an overview of the popular economy in Argentina, sharing the experience of the creation of UTEP, which marked an advance in the conquest of labor rights in the country.

“Having hope is important to develop strategies to think about the future,” he said. “As happened to us in [former president Mauricio Macri’s]  process of neoliberal globalization, we achieved better levels of organization to confront it.. Our humblest people who were denied employment have been building strategies of popular organization.”

Castro stressed that “the strategic policy work is with the whole of society, but fundamentally with a country project that includes everyone. That is why we ask for Tierra, Techo y Trabajo (Land, housing and jobs), a slogan that emerged from the dialogues of the popular movements with the Pope….”

Carlos Ron, president of the Simón Bolívar Institute of Venezuela, recalled the debates that took place in the different working committees, and the idea that revolutionary processes must dialogue with each other.

Thays Carvalho, of the newly-founded Movimiento Brasil Popular, said that the year is decisive for Brazil, but also for Latin America: “We have the challenge of organizing the working class and defeating the extreme right and fascism at the polls, and in the streets with Lula Da Silva. This election is not a guarantee, we must combine it with mass struggle and the organization of the working class.”

From the experience of defending the electoral and democratic process in Peru, Partido Perú Libre’s Zaira Arias noted: “There is a fairly clear struggle and that is that we fight for the poor,” she said. “But we should not understand this struggle as if we were asking for charity, we are asking for justice. In Peru, for example, the right says that poor people are poor because they want to be. But the truth is that our systems reproduce inequality,” she said, pointing out that 1% of the world amasses 82% of the world's wealth.

“How do we explain that according to official figures, Latin America is the most unequal continent in the world, that Africa, being the richest continent, has the poorest people?” she asked. In this sense, she described three guiding principles for the region: ending the right; exposing how corruption is a consequence of the neoliberal model, and that it functions under the hypocrisy of capitalism, which sustains tax havens and builds mechanisms for the systematic usurpation of land and common goods; and, finally, anticipating the pragmatic and political unity of movements and organizations.

In this context of greater representation of the far right in the region, Buenos Aires legislator Ofelia Fernández, of Patria Grande Frente, raised two necessary aspects for militancy and progressive governments: creativity and self-esteem.

“We are facing a very difficult time, with greater uncertainty for my generation [Fernández is 22]. We have to recognize unrest, we are not in a moment of hope,” she said. Assuming the rise of the right wing is the result of the frustration of the population, “It is important to understand that not all discontent is necessarily linked to those right-wing forces.”

She noted, as an example of creativity, the capability of the feminist movements in Argentina to relaunch their agendas after the experience and the consequences coming from the COVID-19 pandemic.

The meeting closed declaring: “[A]fter reviewing, expanding and calibrating our historical foundations, we reaffirm our six fundamental principles: the unity of Nuestro America and internationalism; ideological struggle and decolonization; the defense of Mother Earth and the sovereignty of the peoples; the people’s livelihood; democratization and the construction of people's power; and popular feminisms.”