Housing That’s Affordable – Because the Community Owns the Land

Community land trusts have a long history of helping people afford a home. In a time of skyrocketing housing prices, that’s more important than ever. 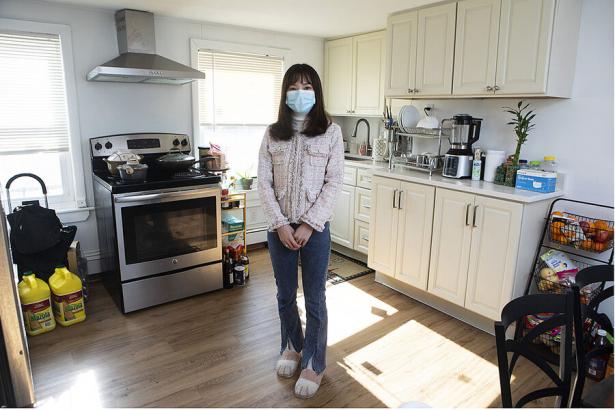 Meidan "Abby" Lin poses in the kitchen of her apartment on Feb. 9, 2022, in Boston's Chinatown. Lin and her husband bought the unit with help from the Chinatown Community Land Trust, whose goal is to stabilize the community through affordable housing,,ownership of land, control of public lands like parks, and the preservation of cultural and historical sights. (Photo by Melanie Stetson Freeman // Christian Science Monitor)

Life in America was not easy. “It was crowded,” Meidan “Abby” Lin says.

In March 2016, Lin; her husband, Yin Zheng; their young son, Yuchen; and Zheng’s mother left Fuzhou, China, a bustling coastal city at the mouth of the Min River, for another port half a world away on the Charles River in Boston.

They shared their first apartment in Boston’s Chinatown with another family. During nights in that cramped space, Lin started dreaming of a place she could call her own. But Boston’s soaring real estate prices seemed to put that dream out of reach. Zheng works at a restaurant. Lin works at home.

Then, a friend told Lin about the Chinatown Community Land Trust. The organization was just getting its start, but maybe it could help.

The group was selling apartments at discount prices, and Lin jumped on the waitlist. But there was only one apartment big enough for her family. “I didn’t think we were able to get it,” she says. All she could do was hope.

Community land trusts, many of them recently founded, are pursuing a novel solution to the nation’s affordable-housing crisis: They’re buying their own properties to preserve them as affordable housing in perpetuity and give residents more say over what happens in quickly changing neighborhoods.

That mission has gained new urgency over the past year as homeowners reap the rewards of a red-hot real estate market while renters are hit with steep rent hikes, deepening the divide between the housing haves and have-nots. Estimates show home values in U.S. metropolitan areas increased a record-breaking 18.8% in 2021. Rents were up by 19.3% over the same period.

“As neighborhoods change and gentrify really fast, the idea of having community control and having more say about how neighborhoods are changing and who’s going to be able to live in the neighborhood over time, from an affordability perspective, I think becomes really important,” says Beth Sorce, who works with community land trusts nationwide at the Grounded Solutions Network, an affordable-housing advocacy group.

Community land trusts have been around for decades, but the trend really began to accelerate after the 2008 recession. In 2019, the Schumacher Center for a New Economics counted 215 land trusts in the U.S. and estimates that there are more than 250 today.

Basically, land trusts raise money from donations, grants, and government funds to buy property. Then, they lease the house or apartment to a buyer well below market value, but the trust retains ownership of the land.

This way, occupants typically get an ownership stake in their homes. They build equity over time, but at a rate that is often capped at 1% or 2% a year. The trust, which is governed democratically by residents and neighbors, can decide to whom the dwelling can be sold and at what price, usually through a covenant in the lease. This ensures the property remains affordable.

The land trust idea was imported to the United States by civil rights activist Charles Sherrod in the early 1970s from the kibbutzim of Israel. Sherrod saw land trusts as a way for Black Americans to buy agricultural land in the South.

“We don’t always talk about community land trusts as tools of justice, but they are,” says Andre Perry, a housing policy expert at the Brookings Institution.

Perry’s own research shows that an “intrinsic value of whiteness” persists at almost every step of homebuying, from the appraisal to the sale. Minorities, but especially Black people, must pay more and get less.

By taking property out of the traditional market, land trusts reduce the discrimination baked into that system and empower communities to actively fight it, Perry says.

When Susan Saegert, a professor of environmental psychology at the City University of New York, compared homebuyers and renters with land trust homebuyers in several U.S. cities, she found that the land trust buyers were more likely to be minorities, especially single mothers. Moreover, she found that they received all the social benefits of homeownership—things like stability and a sense of home—without as many costs.

One of the most striking findings was in survey data from Minneapolis, Saegert says. Freed from the stress of constantly worrying about the next rent hike or eviction, land trust homeowners there reported they had more time to pursue their passions.

“They have breathing space,” Saegert says. “They can now imagine a better life than before.”

In California, justice is what drives Jacqueline Rivera and her fellow housing activists in San Jose. In the heart of Silicon Valley, where even high-paid tech employees struggle to find housing, development was pushing out vibrant Black, Hispanic, and immigrant neighborhoods.

In community conversations Rivera and her colleagues held around the city in 2018, land trusts kept coming up. Rivera grabbed hold of the idea, and by 2020, she was heading up the South Bay Community Land Trust.

Success has not come easily, though.

By definition, land trusts do not make profits, and fundraising is the biggest challenge they face. To buy their first property, a fourplex in downtown San Jose, they need to fundraise at least $1 million, on top of the half-million dollars they need to pay professional staff and make the organization run. Speed is a problem, too. Developers snap up properties with cash in a matter of days, while the land trust moves “at the pace of community,” Rivera says.

Yet, in order to disrupt traditional real estate, land trusts “still have to play in the real estate game,” she adds.

Advocates stress that land trusts are just one tool in a broader approach to the affordability crisis, but it could be a more effective one with government help. Sorce, of Grounded Solutions, says state and local governments should invest money in land trusts and change appraisal policies so land trust properties aren’t paying taxes based on their speculative value.

With or without such help, land trusts must innovate to succeed.

“When we think about community land trusts, so many times we think about just the homeownership level,” says Sheldon Clark, who recently served as president of the board of the Douglass Community Land Trust in Washington, D.C. “And that really just doesn’t cover the housing needs that we have.”

Douglass has units it’s maintaining as permanently affordable rentals and other properties set up as cooperatives. They’ve also helped tenants take advantage of a District of Columbia law that entitles them to buy their unit if their landlord plans to sell.

Really, land trust leaders say, homeownership is just one aspect of their focus on what Clark calls the “big C” in community land trusts: the community.

Douglass organized food drives during the pandemic and helps connect residents to credit unions, as many are unbanked. In Boston’s Chinatown, the land trust helped save a local park.

Lydia Lowe, the Chinatown Community Land Trust’s executive director, strides down the narrow streets of the neighborhood she’s fought for since the 1980s with pride and determination. She points out low-income apartments she’s worked to save from developers on Johnny Court and buildings the land trust is eyeing near the Ding Ho takeout place on Harrison Avenue.

Lowe has needed plenty of determination since the land trust’s incorporation in 2015. “We couldn’t get anyone to give us property, because they’re sitting on a gold mine,” she says. In 2019, the land trust finally secured two row houses, seven units in total, and set about refurbishing them.

Finally, one day in September 2021, the three-bedroom walk-up on Oak Street was ready. After their long wait since moving from China, Lin and her family opened the door and walked in. They could hardly believe what they saw: three cozy bedrooms, a living room with big windows, and a spacious kitchen.

Most of the apartments on Oak Street in Boston are priced from $600,000 to well over $1 million, according to Zillow. Chinatown Community Land Trust sold Lin and Zheng their apartment for about $220,000. Lin said homeownership in Chinatown would not have been possible without the land trust.

“I’m here with my husband and my kids. I have my own family. That’s all that matters,” Lin says. And six years after coming to America, it finally feels like her family has a home.