Veteran Al Jazeera journalist Shireen Abu Akleh was killed by Israeli forces in occupied West Bank. The 51-year-old, covering an Israeli army raid on the Jenin refugee camp when she was shot in the face by a single bullet despite wearing a press vest 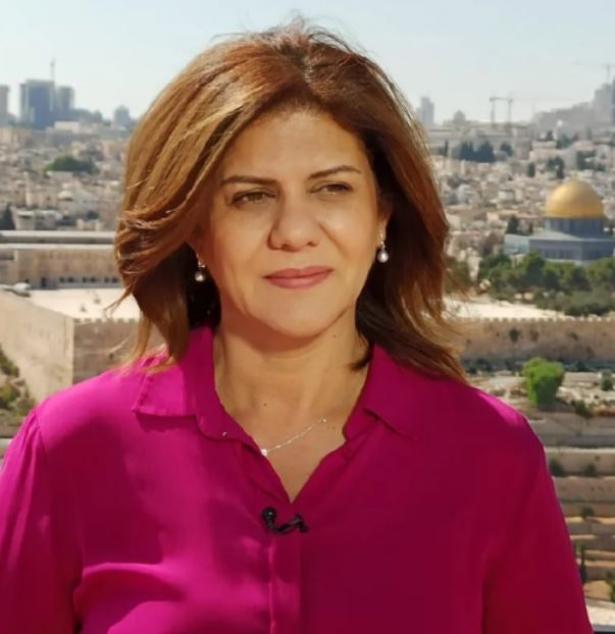 Veteran Al Jazeera journalist Shireen Abu Akleh was shot and killed by Israeli forces in the occupied West Bank. The 51-year-old was covering an Israeli army raid on the Jenin refugee camp when she was shot in the face by a single bullet despite wearing a press vest.

Another Palestinian journalist, Ali al-Samoudi, was wounded in the back but is in stable condition.

Al Jazeera, in a statement, said Abu Akleh was “assassinated in cold blood” and called on the international community to hold Israeli forces responsible.

Below is Al Jazeera Media Network’s statement on the killing of journalist Shireen Abu Akleh:

In a blatant murder, violating international laws and norms, the Israeli occupation forces assassinated in cold blood Al Jazeera’s correspondent in Palestine, Shireen Abu Akleh, targeting her with live fire early this morning, Wednesday, May 11, 2022, while conducting her journalistic duty, clearly wearing a press jacket that identifies her a journalist, covering the Israeli occupation forces storming of Jenin refugee camp in the West Bank.

Al Jazeera Media Network condemns this heinous crime, which intends to only prevent the media from conducting their duty. Al Jazeera holds the Israeli government and the occupation forces responsible for the killing of Shireen. It also calls on the international community to condemn and hold the Israeli occupation forces accountable for their intentional targeting and killing of Shireen.

The Israeli authorities are also responsible for the targeting of Al Jazeera producer Ali al-Samudi, who was also shot in the back while covering the same event, and he is currently undergoing treatment.

Al Jazeera extends its sincere condolences to the family of Shireen in Palestine, and to her extended family around the world, and we pledge to prosecute the perpetrators legally, no matter how hard they try to cover up their crime, and bring them to justice.

As journalists covering the occupied West Bank, we have become accustomed to Israeli attacks against us.

It is the gruelling reality of life under occupation that, most mornings, Palestinians are awakened with the news of Israel arresting or killing their people.

Today was another one of those devastating mornings.

Palestinians were shocked by the news that veteran Palestinian journalist and Al Jazeera correspondent Shireen Abu Akleh was killed by Israeli forces while covering an Israeli army raid on the Jenin refugee camp in the occupied West Bank.

Abu Akleh was a Palestinian icon whose familiar face and voice had entered the homes of millions of Palestinians and Arabic speakers around the world for more than two decades, as she covered the Israeli occupation.

She was one of the brave Palestinian voices who covered Israel’s deadly incursion on the Jenin refugee camp in 2002, which she wrote about last year, saying:

“To me, Jenin is not a one ephemeral story in my career or even in my personal life. It is the city that can raise my morale and help me fly. It embodies the Palestinian spirit that sometimes trembles and falls but, beyond all expectations, rises to pursue its flights and dreams.”

Now, 20 years later, Abu Akleh was killed in the same place where she so valiantly told the stories of Palestinian resistance under occupation for so many years.

The videos that have surfaced of the moment Abu Akleh was shot are bone-chilling. The piercing screams of her colleagues ring through the screen as Abu Akleh, still wearing her helmet and blue flak jacket marked with the words “PRESS”, lies face down near a tree.

A young Palestinian man from the area manages to hop a fence and pull her body to safety, as gunfire rings in the background.

According to the journalists who were stationed around Abu Akleh, the group was clearly marked as press and made themselves known to Israeli forces in the area.

Despite Israeli claims that Abu Akleh was hit by Palestinian gunfire, journalists present at the scene say it was an Israeli sniper that targeted them.

Abu Akleh’s killing is devastating, but it is not surprising.

Abu Akleh’s killing immediately brings back memories of our colleague Yaser Murtaja, a young Palestinian journalist in Gaza who was shot dead in 2018 by Israeli snipers while covering the Great March of Return protests.

Murtaja, like Abu Akleh, was also clearly marked as press, and was killed while wearing his blue flak jacket.

As journalists covering the occupied West Bank, we have become accustomed to Israeli attacks against us. When covering demonstrations or confrontations in the West Bank, journalists are often shot at with tear gas, rubber bullets and live ammunition.

In cases where Israeli aggression against journalists is not lethal, it can lead to life-threatening injuries and lifelong disabilities. In 2019, Palestinian journalist Muath Amarneh lost his eye after Israeli forces shot him with a rubber-coated steel bullet.

Between 2020 and 2022 alone, PJS says that six Palestinian journalists were killed in the occupied West Bank and Gaza.

It is devastating enough to know that Abu Akleh is not the first Palestinian journalist to be killed by Israel, but it is even more distressing to live with the knowledge that she surely will not be the last and that justice for her and her family is but a faraway dream, unlikely to ever be achieved.

Any expressions of “sadness” or calls for an “investigation” into her death by Israel or any of its supporters – including the United States – are just lip service and most certainly are not expressed in good faith.

Israel’s propaganda machine is already working in overdrive to deflect and reassign blame.

The Israeli government has already positioned itself as a benevolent figure, with Prime Minister Naftali Bennett saying it “has called on the Palestinians to conduct a joint pathological analysis and investigation, which would be based on all of the existing documentation and findings, in order to get to the truth. So far, the Palestinians have refused this offer”.

But how can Israel be expected to carry out a proper investigation when it has already absolved itself of the crime?

We have seen these same tactics employed time and time again. In the few instances where Israel launches an investigation into the killing of a Palestinian, those “investigations” are almost always closed.

As B’Tselem, Israel’s leading human rights organisation, put it previously, “other than a handful of cases, usually involving low-ranking soldiers, no one has been put on trial for harming Palestinians”.

Israel consistently violates international human rights laws in the occupied territory, but rarely is accountability ever demanded by third-party states and the global institutions responsible for ensuring and implementing justice.

The lack of political will among world leaders, institutions, and agencies to hold Israel to account for its crimes was on full display last year when Israel bombed the al-Jalaa tower in Gaza, home to the media offices of Al Jazeera and The Associated Press.

So long as Israel continues to operate with impunity and commit human rights violations with no accountability from the international community, we will inevitably see more of what we witnessed today.

Shireen Abu Akleh – who was killed by Israeli forces while reporting – was a role model, colleagues and friends say.

Al Jazeera’s Shireen Abu Akleh, a 51-year-old Palestinian-American native of Jerusalem, was on assignment in the occupied West Bank when Israeli forces shot and killed her while wearing a blue flak jacket clearly marked with the word “PRESS”.

The veteran journalist, who was shot in the head, was a role model for generations of Arab journalists and a voice for the voiceless according to her colleagues and friends, having reported on Palestine and the surrounding region for three decades.

Here is how some of them have chosen to remember her:

Jarrar said that Abu Akleh was the voice of Palestinians and was killed by “the monstrosity of Israeli colonialism and occupation”.

“Shireen was always my voice from the prison cells,” she said, adding that a month into her last detention by Israel, Shireen was the first person she saw at her court hearings.

“Shireen was our voice. It is unbelievable. It is a crime, it is all clear – intentional and direct targeting. She was targeted. It’s clear.”

Al Jazeera journalist Tamer Mishal said Abu Akleh was a role model “for every Palestinian journalist and for every Arab journalist”.

“Till the very last second, Shireen Abu Akleh was professional and persevering,” he added.

The last message Abu Akleh sent to Al Jazeera was an email at 6:13am local time (03:13 GMT) in which she wrote: “Occupation forces storm Jenin and besiege a house in the Jabriyat neighbourhood. On the way there, I will bring you news as soon as the picture becomes clear.”

Al-Omari said that at the time of Abu Akleh’s killing, there were no confrontations between Israeli soldiers and Palestinian fighters.

“It seems that she was targeted even though she was in her journalist vest; she was not known to have biases towards certain parties that would make her a clear target, and she covered the truth and the whole truth,” he said.

Ibrahim, an Al Jazeera correspondent and colleague of Abu Akleh’s in the occupied West Bank, said “she was kind, dedicated and devoted”.

Speaking through tears, Ibrahim described Abu Akleh as a “unique” human being who was “very well known, but modest” and committed to personal excellence.

“Shireen knew the story through and through and she understood the nuances. She brought a wealth of information to her reporting,” she said.

At the time of her death, Abu Akleh had been learning Hebrew in order to understand Israeli media narratives better, and had just finished a diploma in digital media, Ibrahim said.

“She’s not only someone who was a veteran, who’s been here covering the story for years, but also someone who was eager to keep learning and keep reporting using new means.”

Hatuqa, an Al Jazeera journalist who was a close friend of Abu Akleh, said “Shireen was a trailblazer, an inspiration for us all”.

“Her presence became synonymous with Al Jazeera,” she said.

Hatuqa said that to her friends, Abu Akleh was far more than the face of Al Jazeera in Palestine.

“She had an infectious laugh. She loved to travel, see the world, shop, party,” Hatuqa said. “She lost her mother and father when she was younger and saw so much cruelty in the world, especially in Palestine, but that never stopped her from appreciating and enjoying life.”

“Shireen Abu Akleh is a professor in the world of journalism, a professor in humanity and manners. I’ve been a journalist in Jerusalem for more than 12 years – I learned from Shireen on all levels, not just journalism,” Rinawi told Al Jazeera.

“We would meet for hours in the field, we would be arrested together, we were wounded together,” she said. “We lost Shireen because the killing of Palestinians has become an easy matter.”

“There are no words to explain the pain that we are all going through, every Palestinian and Arab journalist is going through, and especially those who worked with her and saw her high professionalism and manners. We are very sad.”