labor We Failed To Protect Abortion Rights. We Need a Labor-Based Strategy.

Despite majority support for abortion rights, we failed to build a majority coalition to defend reproductive freedom. We should honestly assess our failures — and then build a movement that ties together labor, feminists, and health care organizing.

May 12, 2022 Lillian Cicerchia Jacobin
Printer friendly
We Failed To Protect Abortion Rights. We Need a Labor-Based Strategy. Published May 12, 2022 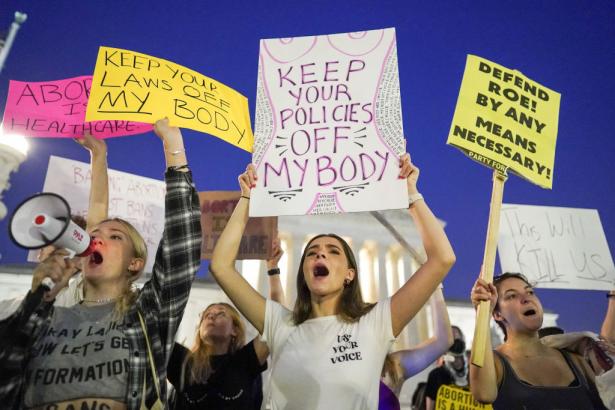 A crowd gathers outside the Supreme Court to protest against the overturning of Roe v. Wade.,(Kent Nishimura / Getty Images)

There is not much new to say about the leaked Supreme Court decision that is poised to overturn the legal precedent set in Roe v. Wade (1973). That precedent stated that women have a right to privacy and therefore the right to an abortion. The shortcomings of the privacy precedent are clear. It’s only indirectly a right to have an abortion, as it’s really a right to not have the state directly involve itself in one’s medical decisions.

The US right has challenged this ruling for years in the streets and in the courts, state by state. The story of the end of Roe is the story of the most organized, militant, and successful conservative social movement of the past fifty years. In the end, the Democratic Party didn’t stop them. Neither did the reproductive rights and the social justice nonprofits that so many depend on for health care and legal support.

Am I angry with the Right? Oh, yes. Beyond the court cases, I have watched them harass, intimidate, and lie to women in front of clinics over and over again. I have never lived in a country where they did not dominate the political argument. I have watched them invade and bomb clinics, murder doctors, stalk clinic workers, and follow women around their neighborhoods and to their homes, all in the name of protecting “life.” From Texas to New York City, the antiabortion right is unscrupulous and unforgivable.

But this outcome was entirely expected. As a result, I am now angrier with the abortion rights movement — from leftists to liberal Democrats.

Now that Roe is almost dead, I’d like to be clear about why. Seventy percent of the US population supports abortion rights. The fact that we have lost these rights to a minority coalition should prompt self-criticism. It is our responsibility to put together a majority coalition that can safeguard basic reproductive rights. It is our responsibility to frame the issue in a way that challenges culture war narratives with a universalist program that advocates for those rights. We didn’t. So let’s take stock.

At every turn, from Hillary Clinton’s abortion should be “safe, legal, and rare” speech to the Right’s “abortion is racist” charge, we implicitly accepted that abortions are malign or allowed ourselves to be put on the defensive. We decided that it was better to downplay abortion services at women’s clinics and instead argue for the funding of Planned Parenthood because it provides routine pap smears. Well, the Right wasn’t coming after Planned Parenthood because of the pap smears, were they? It is contradictory to demand that the abortion rights movement de-emphasize abortion when abortion is the issue that animates the Right’s challenge.

By tailing the Right, we have blurred what should be a principled line between respecting women’s autonomy and taking it away. The Right says that abortion is racist because its provision is a concerted attempt by white people (feminists) to kill black babies in the womb — and we seem to agree at times by describing the history of abortion rights in the United States as a white women’s issue, always and everywhere marred by the country’s horrific episodes of forced sterilization. (This kind of rhetoric, though common in movement circles, tends not to make it into print — thus the Twitter link.)

But it is not racist to provide abortion services. Rather, it is racist to force people to have abortions because of their race (which is still not the same thing as forced sterilization). Abortion is not the only reproductive health care issue that matters — far from it — but the contradiction between the demand to de-emphasize abortion in the movement and abortion being the spearhead of the Right’s offensive holds here as well. How, exactly, do we plan to defend the right to abortion by incorporating it into a broader health care agenda if we can’t even defend the right to abortion in the first place?

Finally, the abortion rights movement has allowed the Right to present itself as not only anti-racist, but feminist as well. The “pro-life feminist” script taps into the intuition that the Democratic Party does not really care about most women, despite their “girl boss” rhetoric. The Right then turns around and says that they care about women. Although the Right doesn’t have any social policies that would support women and their dependents, they sell the lie that they might do so with vague promises of church, family, and community support. Seems like a nice tradeoff for reproductive rights, doesn’t it?

Second, the abortion rights movement has become captive to the liberal nonprofit world, with all of its terms and conditions.

This captivity is both strategic and moral. The nonprofits are “doing the work.” They are “community organizing” and “in the struggle.” They are providing vital services that people need. They surely know what’s best, especially when it comes to securing public and private funds for their operations. Only they know how to navigate the legal and electoral systems with their lawyers, lobbyists, and grant writers.

This world contains an intricate web of professional activism that you almost need a degree to understand, which puts us on amateur footing when we notice their strategy is failing. Upon receiving criticism, the nonprofits pull out their moral guns by insisting that they are the ones on the front lines protecting the most vulnerable women — and that their “privileged” critics have nothing worthwhile to say.

Third, the movement did not unambiguously get behind a federal universal health care plan.

Here it is worth distinguishing between socialists and liberal Democrats since the former have strongly supported Medicare for All. The latter, however, have not, which can be seen in Planned Parenthood’s inconsistent state-by-state position on the matter. In some cases, they support it. In other cases, they don’t. I suspect that either position is largely dictated by their relationship to their state Democratic Party.

But we ought to ask why feminist actors have been unable to push nonprofits like Planned Parenthood to the left on health care. The only way out of the state-by-state strategic morass is to win a federal health program that includes abortion coverage — so it is important to assess our seeming incapacity to knit together a reproductive rights coalition that sees universal health care as a medium-term goal.

The issue, it seems, is intimately related to the nonprofit capture problem. And it also speaks to why calls to deemphasize abortion lack a concrete policy strategy. How can we guarantee abortion access without integrating it into a compelling universal program that protects other reproductive rights as well?

Fourth, the movement criticized its own ideology, and then made no strategic improvements.

For thirty years now, left feminists have been criticizing liberals’ “pro-choice” ideology for failing to address a wide array of reproductive health concerns and inequality of access to it. The “pro-choice” framework is indeed insufficient, but the alternative “reproductive justice” framework is still a largely academic and nonprofit-driven idea that falls prey to the same strategic problems.

In other words, these internal disagreements have done a respectable job of challenging some mainstream liberal feminist narratives but have done little to change the course of the movement. It is politically impotent to have two competing ideologies with no discernible strategic differences. What does it matter if you have a more robust ideological framework if it doesn’t generate a distinct politics? How, we should always ask, does it change the strategy to win abortion rights specifically?

Fifth, the abortion rights movement accepts outdated narratives about what this is all about.

The Left has held onto the notion that the antiabortion movement is a backlash against the feminist and civil rights movements. The Right, the narrative goes, wants white women back in the home and pumping out babies so as to control them and prevent Anglo-Saxon demographic decline. Women of color are simply collateral damage in this effort. It is, therefore, some amount of feminist success that propels these reactionary politics.

This idea, I think, is upside down. It is feminism’s failure to attack the deep ills of the United States’ political economy that make antiabortion politics a force for reaction. Just look at countries without a militant antiabortion movement: they have public programs to support women, their dependents, and working-class families through crises and tough times. Even if such programs have been hit by austerity, they are there, and they matter. They have insulated abortion rights from conservative challenges by giving everyone a stake in defending those social benefits.

Instead, in the United States, we have white supremacists, black Baptists, Latino Catholics, and “pro-life” Evangelical feminists joining together at demonstrations to accuse clinic escorts of being the Ku Klux Klan incarnate. It’s wild stuff, and it’s partly thanks to our historic inability to win broader social protections.

People are anxious about the social status of the family and women’s fertility for extremely assorted reasons, some of which are completely contradictory. Abortion gives them a focus. What the Left should emphasize, though, is the need to create ties between feminists, the labor movement, and health care campaigning. There is currently a middle- and upper-class bias to most feminist politics in the United States that needs to be thoroughly dissected, understood, and repudiated.

I don’t have an uplifting message to close on. I only have my two cents: the Left should take a deep breath, then regroup to fight on a stronger footing than before. It’s taken the Right fifty years to get where they are, so it is hysterical to insist the “fascists” are now, finally, charging at the gates — or that another harried vote for Democrats will suddenly change things.

If the antiabortion right are fascists (and some surely are), then consider that they’ve been there, chipping away, for decades, often through the regular organs of the US political system. If that’s the case, then we have long since been living in their world in practice if not in law. Panic is of little political value. So we may as well stop and reflect on our strategic failures, lest we wind up doing the exact same thing over and over again.

And maybe — just maybe — our side will have a “come to Jesus” moment of its own.

Lillian Cicerchia is a postdoctoral researcher in philosophy at the Free University of Berlin, with a focus on political economy, feminism, and critical theory.