For 40 years, scientists thought a specific gene was linked to aggression in hamsters. Removing it, however, had violent consequences. 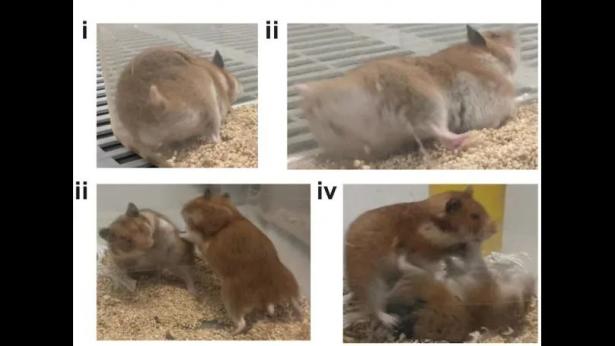 In i and ii, a male hamster flank marks the corner of its cage. In iii and iv, a larger female attacks and pins a smaller female., Jack H. Taylor et al., PNAS, 2022)

Hamsters have a social organization and stress response that is more human-like than any other rodent. Thus, behavioral scientists have relied on hamsters to understand the forces that govern behavior. According to a recent study, however, these forces are less well-understood than previously thought. The researchers used gene-editing technology to delete a receptor thought to cause aggression in hamsters. Instead of becoming more cuddly, however, the hamsters got mean.

A gene that regulates aggression

In 1984, a group of researchers set out to study the circadian rhythm by injecting small amounts of hormones into the brains of hamsters. One of the hormones, arginine vasopressin (AVP), had an immediate and surprising effect. It didn’t alter the hamsters’ sleep cycle, but it did induce a dramatic behavioral change. The hamsters began soaking their hips (where the scent glands are located) with saliva and rubbing themselves vigorously against the wall of the cage, a behavior indicative of aggressively claiming their territory.

One study, however, created an air of mystery around Avpr1a. In 2007, a team of researchers at the University of Buffalo knocked out the Avpr1a gene in male mice, expecting the mice to show reduced aggression due to a lack of AVP signaling. However, the Avpr1a-lacking mice were no more or less aggressive than normal mice. For over a decade, this discrepancy was explained as being due to developmental compensation — that is, the embryo compensated for the lack of Avpr1a by modulating other behavioral pathways.

A team of researchers at Georgia State University led by Elliott Albers and Kim Huhman, however, disagreed. The major gripe that they had with the 2007 study was that Avpr1a was knocked out in mice, rather than hamsters. Such differences matter. So, the researchers used CRISPR-Cas9 gene-editing technology to mutate the Avpr1a receptor gene (so that it was no longer functional) in male and female hamsters.

The researchers believed that, by removing the hamster’s ability to make Avpr1a, the hamsters would become less aggressive. Their hypothesis was incorrect. To the contrary, all Avpr1a-lacking hamsters, regardless of sex, exhibited far more aggressive behavior, doing twice as much flank marking as well as chasing, biting, and pinning down other same-sex hamsters.

The authors did not expect angry hamsters. “This suggests a startling conclusion,” Albers said. “Even though we know that [AVP] increases social behaviors by acting within a number of brain regions, it is possible that the more global effects of the Avpr1a receptor are inhibitory. We don’t understand this system as well as we thought we did. The counterintuitive findings tell us we need to start thinking about the actions of these receptors across entire circuits of the brain and not just in specific brain regions.”

Dr. Peter Rogers grew up milking cows and building barns. This provided him the transferable skills necessary for a smooth transition into academic research. Three years of genetics research led to six years of immunology research, which led to a PhD from Auburn University. That led to three and half years of instructional design research at Tufts University School of Medicine.

His expertise includes biomedical sciences & technology, social determinants of health, bovine birthing, training & development, and cognitive psychology. He’s taught dozens of university courses, ranging from Principles of Biology to Advanced Medical Immunology. He is currently co-writing a book with his father, George Rogers, called How to Correctly Hold a Flashlight: A Disagreement in Academic and Agricultural Perspectives.

Get Big Think in Your Inbox. Join our community of more than 10 million lifelong learners and get smarter, faster today.