Originalism, as used by this Court, just provides cover for a right-wing polit­ical agenda. It is a threat to democracy. 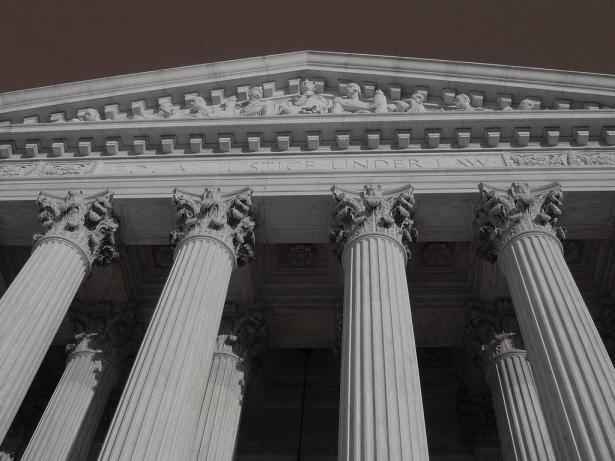 Last week’s Supreme Court rulings on abor­tion and guns shook the coun­try. Both rely on a radical approach to how to read the Consti­tu­tion: making major social policy by purport­ing to use “origin­al­ism.” Together they show how flawed that can be. Liber­als must find their voice and put forward a better way to explain the Consti­tu­tion and how it works  — or we can expect more weeks like this one every June as we wait for oracles in robes to consult the vapors of history and tell us our fates.

The notion that the Consti­tu­tion should be read as frozen in time is a relat­ively new inven­tion. Certainly it is not what the found­ing gener­a­tion had in mind. As Chief Justice John Marshall wrote, “We must never forget that it is a consti­tu­tion we are expound­ing.” A great charter would enable a grow­ing nation to meet new chal­lenges. Dred Scott was the first major origin­al­ist ruling, claim­ing to find its defense of slavery and its asser­tion that even free Black people could not be citizens in the original intent of the founders. It was such a notori­ous disaster that the approach was shelved for a century.

The insist­ence that “original intent” or “original public mean­ing” is the only legit­im­ate way to read the Consti­tu­tion came as part of the conser­vat­ive reac­tion to expand­ing rights in the 1960s and 1970s. Supposedly it would take the polit­ics out of judging. It was a wildly contro­ver­sial idea first proposed in a big way in a speech by Attor­ney General Edwin Meese III and then defen­ded by Robert Bork in his doomed nomin­a­tion for the Supreme Court.

Soon it became a comfort­able talk­ing point. It reson­ated with conser­vat­ive reli­gious prac­tice — a form of consti­tu­tional funda­ment­al­ism and liter­al­ism. It coin­cided with “Founders Chic,” all the thick biograph­ies of the found­ing gener­a­tion. By the time of her confirm­a­tion hear­ing, Elena Kagan would quip, “We are all origin­al­ists now.” At times the approach has helped forge a major­ity for unex­pec­ted rulings on crim­inal justice.

But the Supreme Court rarely preten­ded it could just take a time machine to ask the guys in powdered wigs what to do. Justice Antonin Scali­a’s big ruling in 2008, D.C. v. Heller, purpor­ted to rely on history when he found that it recog­nized an indi­vidual right to own a gun to protect “hearth and home.” But it also made clear the vast major­ity of gun rules to protect public safety could stand.

Scalia was asked what the differ­ence was between him and Justice Clar­ence Thomas. “I am an origin­al­ist. I am not a nut.”

Well, it was Thomas who wrote the major­ity opin­ion in last Thursday’s big Second Amend­ment case. In New York State Rifle & Pistol Asso­ci­ation v. Bruen, the Court struck down New York’s 1911 law largely prohib­it­ing people from carry­ing a concealed weapon in the Big Apple. Thomas’s opin­ion mentions “public safety” as a goal precisely once in 63 pages (and only to criti­cize an earlier ruling that used that rationale). Regu­la­tion of fire­arms has ebbed and flowed. During peri­ods of high crime, we tightened gun laws, and with good reason: times change. An honest read­ing of history would acknow­ledge this fact. Thomas makes no effort to under­stand the reason why the law was enacted over a century ago, how it has worked, or the fact that New York and other states with a similar law have lower rates of gun crime than else­where.

Instead, Thomas ransacked the histor­ical record, clas­sic “law office history” that seeks support­ing evid­ence. Justice Stephen Brey­er’s dissent mocked the opin­ion: “Some of the laws New York has iden­ti­fied are too old. But others are too recent. Still others did not last long enough. Some applied to too few people. Some were enacted for the wrong reas­ons. Some may have been based on a consti­tu­tional rationale that is now impossible to identify. Some arose in histor­ic­ally unique circum­stances. And some are not suffi­ciently analog­ous to the licens­ing regime at issue here.” Dr. Seuss could not have said it better.

The most danger­ous part of the ruling was the Court’s new doctrine that all gun regu­la­tion now must be assessed only by look­ing at “history and tradi­tion.” This approach will now be parsed and followed by judges all across the coun­try, forced to play as amateur histor­i­ans, look­ing for analo­gies. Where do modern weapons, modern needs, modern “sens­it­ive places” like the subway fit in? We don’t know.

Thomas’s opin­ion in Bruen shows that for all its pretense, origin­al­ism in the hands of this Court was fake. Justice Samuel Alito’s use of origin­al­ism in Dobbs v. Jack­son Women’s Health Organ­iz­a­tion shows it to be danger­ous and reac­tion­ary.

Dobbs distorts history too. Abor­tion was legal at the time of the found­ing (up until quick­en­ing), but faced bans later in the 19th century. But here was the heart of Alito’s opin­ion: “The Court finds that the right to abor­tion is not deeply rooted in the Nation’s history and tradi­tion.” What that means, in prac­tical terms, is the Court looked to a time when women could not vote or sit on juries, when Black people were slaves, when sexual orient­a­tion was a shame­ful secret. The opin­ion purpor­ted to just turn the issue of abor­tion rights over to the people in the states, but in terms of the Consti­tu­tion, it would repeal the 20th century.

It fell to Thomas to spell out the consequences of this vision: target­ing marriage equal­ity, LGBTQ rights, and the right to contra­cep­tion, among other things. At least 10 of his former clerks are now federal judges. We can expect some to pick up on his hint and take up the cause in months to come.

Yes, those appalled by these rulings should make the point that they mangle history. We will have no choice but to point to other better read­ings of the past.

But it is well past time that liber­als on and off the courts spell out why this approach — this sudden conver­sion to origin­al­ism in the two biggest cases of the year — is an absurd way to run a coun­try or inter­pret a consti­tu­tion. It cloaks conser­vat­ive policy choices in preten­tious garb. But it is hardly a coin­cid­ence that these two rulings would allow red states to ban abor­tions while barring blue states from regu­lat­ing guns.

Justice William J. Bren­nan Jr. rebuked the first argu­ments for origin­al­ism in the 1980s. “We current Justices read the Consti­tu­­tion in the only way that we can: as twen­ti­eth-century Amer­­ic­ans,” he said then. “We look to the history of the time of fram­ing and to the inter­­ven­ing history of inter­­­pret­a­­tion. But the ulti­mate ques­­tion must be: What do the words of the text mean in our time? For the genius of the Consti­tu­­tion rests not in any static mean­ing it might have had in a world that is dead and gone, but in the adapt­­ab­il­ity of its great prin­­ciples to cope with current prob­lems and current needs.”

Today we might find Bren­nan’s argu­ment too vague, too much a cloak for liberal justices making liberal rulings. But now we have conser­vat­ive justices pretend­ing to use history to advance their own policy goals. Liber­als and progress­ives will need to offer robust and persuas­ive public argu­ments. That’s import­ant for the courts. It’s even more import­ant for the court of public opin­ion.

Bren­nan’s basic point was endur­ing and right: the only way a great nation can govern itself is to recog­nize that the Consti­tu­tion respects and advances the great goals of free­dom, dignity, and demo­cracy in a chan­ging coun­try in chan­ging times. Right now, as used by this Court, origin­al­ism just provides cover for a right-wing polit­ical agenda. And to para­phrase Antonin Scalia of all people, it’s nuts.