With Rising Book Bans, Librarians Have Come Under Attack

Caustic fights over which books belong on the shelves have put librarians at the center of a bitter and widening culture war. Some of the conflicts have gotten so heated that community members have tried to seek criminal charges against librarians. 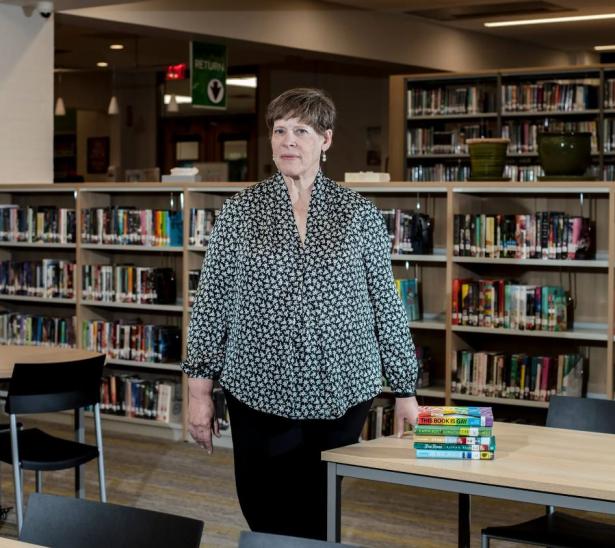 Martha Hickson, a librarian, said that when book ban attempts turned into personal attacks she became so stressed she couldn’t sleep and lost 12 pounds in a week.,Credit: Bryan Anselm for The New York Times

Martha Hickson, a high school librarian in Annandale, N.J., heard last fall that some parents were going to call for her library to ban certain books. So at 7 p.m., when she and her husband would usually watch “Jeopardy!” she got comfortable in her recliner and turned on a livestream of the local school board meeting.

A parent stood up and denounced two books, “Lawn Boy” and “Gender Queer,” calling them pornographic. Both books, award winners with L.G.B.T.Q. characters and frank depictions of sex, have been challenged around the country and were available at the North Hunterdon High School library. Then the woman called out Ms. Hickson, who is the librarian there, by name, for allowing her 16-year-old son to check out the books.

“This amounts to an effort to groom our kids to make them more willing to participate in the heinous acts described in these books,” said the parent, Gina DeLusant, according to a video recording of the meeting. “It grooms them to accept the inappropriate advances of an adult.”

Ms. Hickson said the accusation left her sick to her stomach, with a tightness in her chest. “I was stunned,” she said. “I couldn’t believe it.”

As highly visible and politicized book bans have exploded across the country, librarians — accustomed to being seen as dedicated public servants in their communities — have found themselves on the front lines of an acrimonious culture war, with their careers and their personal reputations at risk.

They have been labeled pedophiles on social media, called out by local politicians and reported to law enforcement officials. Some librarians have quit after being harassed online. Others have been fired for refusing to remove books from circulation.

In many communities, putting books on the shelves has become a polarizing act and has “turned librarians into this political pawn,” said Ami Uselman, the director of library and media services for Round Rock Independent School District, in Texas.

“You can imagine our librarians feel scared,” she said, “like their character was in question.”

Librarians are taught to curate well-rounded collections that represent a range of viewpoints, especially on contentious topics, according to the American Library Association; they use award lists, reviews and other publications to inform their choices.

Addressing book challenges has always been part of the job, but efforts to ban books have spiked in recent months, reflecting a clash over whether and how to teach children about issues like L.G.B.T.Q. rights and racial inequality. The library association tracked 1,597 books that were challenged in 2021, the highest number since the organization began tracking bans 20 years ago.

Traditionally, concerned community members might approach the library staff to discuss a title. Parents could often prevent their children from checking out specific books, or if they thought a title should be removed from circulation, they could fill out a form to start a reconsideration process, where the book’s suitability would be reviewed by a committee.

These challenges would come from both the left and the right — there might be objections to L.G.B.T.Q. characters, or racial slurs in “Adventures of Huckleberry Finn.”

Those quieter confrontations continue today, librarians said, but conflicts around books have drastically escalated. Now, the Proud Boys, an extremist group, might show up at a school board meeting because books are on the agenda, as they did last fall in Downers Grove, Ill. Last month, members of the Proud Boys disrupted a drag queen-hosted story hour for families in San Lorenzo, Calif., and an L.G.B.T.Q.-themed story time in Wilmington, N.C.

In Cabot, Ark., the local police department investigated a woman who said that if she had “any mental issues,” staff at a local school library would be “plowed down” with a gun, according to a police report. The police determined that the incident, which took place at a meeting of Moms For Liberty — a group that has pushed for book bans around the country — was not made in context of a threat and there was no need to file charges.

Frequently, these battles are portrayed as liberal librarians defending left-wing books, but Carolyn Foote, a retired librarian and a founder of the group Freadom Fighters, which organizes to defend librarians, said the idea that everyone in the profession is liberal isn’t true, especially in a place like Texas, where she lives. For most librarians, she said, the issue is not one of politics but of professional ethics.

“It’s crushing,” she said of efforts to restrict access to certain books. “You know what your job is, you know what the best practices and standards are for your profession, and you’re being made to do things that you know violate all of that.”

Increasingly, the personal and professional integrity of librarians is also being called into question.

In May, a Republican state representative in Virginia Beach, Tim Anderson, filed a Freedom of Information Act Request to learn the identities of librarians at schools that had copies of books some parents complained included sexually explicit material.

“The question is, how are pervasively vulgar books getting into the schools?” he said in an interview. “Is it the librarians that are doing this?”

Some of the conflicts have gotten so heated that community members have tried to seek criminal charges against librarians. In Ms. Hickson’s district in New Jersey, a complaint was made to the Clinton Township Police Department about obscene materials in a library book. The Hunterdon County Prosecutor’s Office said none of the information it received indicated criminal conduct. In Granbury, Tex., a county constable opened an investigation about books available in a high school library after receiving a complaint.

Many librarians have quit — or lost their jobs — after clashes over books.

Suzette Baker was fired from her job at the head of Kingsland Library branch in Llano County, Tex., after she repeatedly refused to remove books as county officials had demanded, according to a lawsuit. The suit was filed this spring by residents against county officials, saying they violated the First Amendment by censoring books.

Among the titles officials wanted removed were “How to Be an Antiracist,” by Ibram X. Kendi, and “Between the World and Me,” by Ta-Nehisi Coates. Llano County officials and the county attorney did not respond to a request for comment.

Debbie Chavez, who worked as a librarian for 18 years, decided to leave the profession after a parent who met with her to discuss his objections to “Lawn Boy” recorded their conversation without her knowledge. Excerpts were posted on Facebook, and commenters called for Ms. Chavez to be fired and said she was “grooming children.” She received vicious messages on her school email, she said, and ultimately left her job as a high school librarian in Round Rock in March.

“It was so horrific to see that my words were being used as a rallying cry for the book censors, and to see that my conversation had been misrepresented,” she said. “And I was supposed to still get dressed and go to school and do my job.”

Tonya Ryals quit her job as the assistant director of the Jonesboro Public Library, in Craighead County, Ark., in February after her library board introduced a slate of new policies, including requiring board approval for every new book acquired for the children’s collection. The policies were voted down, but the vitriol she encountered online became too much, she said.

“There were comments about library staff, calling us groomers and pedophiles and saying we needed to be fired, we need to be jailed, we needed to be locked up, that all the books needed to be burned,” she said. “It got to a certain point where I thought, do I want to live here? Is this something I can subject myself to?”

Sometimes the books in question disappear from the shelves, even though library policies generally dictate that books should remain available until the challenge process is complete. Deborah Caldwell-Stone, the director of the office of intellectual freedom at the library association, said her office has received reports that some groups are checking out books they deem objectionable.

Libraries also face increasing pressure from legislators, who are crafting new laws and procedures intended to make it easier to remove books that are challenged. At least five states, including Arizona, Georgia and Kentucky, have passed laws that change the way libraries handle complaints about material, or the way library board members are appointed, according to EveryLibrary, a political action committee for libraries.

Many states have laws that shield teachers, researchers and librarians from prosecution so they can use educational materials that some might consider objectionable. Those laws are also being challenged.

Oklahoma recently passed a law that will remove exemptions for teachers and librarians “from prosecution for willful violations of state law prohibiting indecent exposure to obscene material or child pornography.”

To some librarians, the moment has been especially jarring because when pandemic restrictions were in place, they were hailed as heroes for delivering books and laptops to students at home. Now, said Audrey Wilson-Youngblood, a library services coordinator in Texas, librarians are seen by some as villains.

“It felt like a knife in my heart,” she said of allegations that library staff were doing harm to students. “That grief is what led me to make really difficult decisions, to make changes for myself and my family.”

Ms. Wilson-Youngblood resigned last month from her position at the Keller Independent School District because of the toll the stress was taking on her family. She had worked there for 19 years.

[Elizabeth A. Harris writes about books and publishing for The New York Times. A Times reporter since 2009, she has covered education, retail companies for the business section, real estate as the “Appraisal” columnist, New York politics and the arts. Her work has been honored with awards from the New York Press Club and the Silurians Press Club.

Alexandra Alter writes about publishing and the literary world for The New York Times. Before joining The Times in 2014, she covered books and culture for The Wall Street Journal, where she was a reporter for seven years. Prior to that, she reported on religion, and the occasional hurricane, for The Miami Herald. She holds a bachelor’s degree in religion from Columbia University, and received master’s degrees in religion and journalism from Columbia.]

More on the Rise in Book-Banning Efforts