The Supreme Court’s attack on abortion rights will strengthen employers seeking to maintain their unilateral power over workers within and outside the workplace. Luckily, the labor movement knows that abortion rights are workers’ rights. 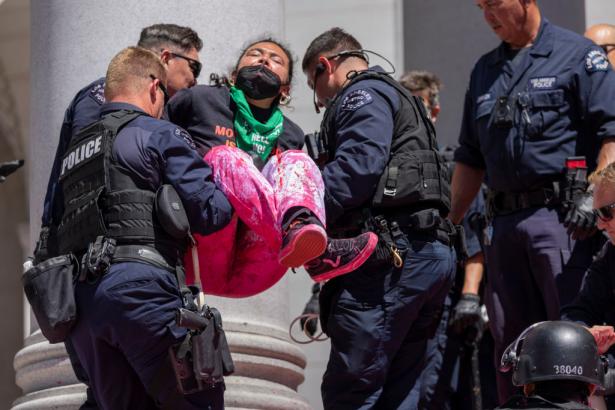 "Choice and self-determination are at the foundation of why we formed our union seventy-five years ago,” said Sara Nelson, president of the Association of Flight Attendants (AFA)-CWA, following the Supreme Court’s Dobbs v. Jackson Women’s Health Association ruling.

It was once standard for airlines to restrict flight attendant jobs to a particular type of person: “white, single, childless women under age thirty-two who met specific height, weight, and male-defined appearance standards,” as Nelson describes it. “Even if you met those “standards,” getting pregnant, having a baby, choosing to marry or gaining a few pounds meant giving up your job and handing in your wings.” Unionized flight attendants fought against such control, making a worker’s lifestyle and appearance her business, rather than that of her employer.

With Dobbs, one of workers’ critical life choices is now more closely tied to their employer. The ruling effectively leaves the matter of abortion up to states, some of which had trigger laws in place anticipating the ruling and others of which are quickly moving to similarly ban legal abortion. Such unevenness across states has clear implications for workers.

Tying health care provision to employment status, as we do in the United States, strengthens employers’ leverage over workers. If your ability to get medical treatment depends upon remaining employed, you are less likely to speak up about problems at work or organize with your coworkers to fix those problems, up to and including going on strike — as we saw last year, employers whose workers went on strike were quick to suspend health insurance, even during a pandemic.

While unionized workers are more likely to have health benefits than nonunion ones, the very fact that health insurance is a subject of bargaining hurts workers who could otherwise use their leverage to make advances on other issues. Following Dobbs, some unions are pushing to add employer reimbursement for abortion-related coverage to their contracts and otherwise creatively solve this new problem; rightly so, but that’s one more thing that shouldn’t be a chip on the bargaining table in the first place.

Dobbs should be read in this light, as giving employers yet further power over workers’ health care. Now, if your job options are narrowed because you want to live in a state where abortion is legal, or because you only want to work at a company that covers the cost of travel for abortion, you will be under greater pressure to take what you can get, even if that means worse wages, worse working conditions, a worse schedule, and so on. And as union members know, when your coworkers are willing to accept lower standards, yours will decline too. While some union leaders may be reluctant to say or do much in response to Dobbs for fear of alienating members who support the attack on abortion rights, such a stance is shortsighted.

We’re already seeing how the Supreme Court’s attack on worker self-determination will play out. Some employers — Apple, Dick’s Sporting Goods, Disney, and Meta, to name a few — have declared their intention to offer reimbursement for workers who need to travel for an abortion. (Of course, we should suspend belief in such proclamations until we see the details in writing).

The fissured workplace, where many companies’ operations are composed of a labyrinth of subcontractors, means that while some workers will get such coverage, others won’t. DoorDash, Lyft, and Uber will continue covering employees’ health care–related travel expenses, but as their business models are predicated on denying that drivers are employees, those low-wage workers won’t be covered. While Uber and Lyft have created a “Driver Defense Fund,” pledging to cover legal fees for any driver sued under Oklahoma and Texas’s anti-abortion laws that allow individuals to sue anyone who “aids or abets the performance or inducement of an abortion,” including by driving a patient to a medical facility, that is not the same as ensuring drivers themselves can access necessary health care.

The same issue applies to Amazon. The company will offer all US employees an annual reimbursement of up to $4,000 for abortion-related travel, but the key word is “employees.” The roughly 115,000 delivery drivers who ferry packages to customers’ doors are excluded, as they are technically employed by other companies, known in Amazon parlance as “delivery-service partners.” That these are among the lowest-paid workers in the Amazon workforce only compounds the injustice.

Meanwhile, at Starbucks, while workers now seem to be covered for abortion-related travel expenses, some employees at newly unionized stores say the company has used this newfound power to continue union busting, deeming it unclear whether such coverage is guaranteed at unionized locations.

Abortion access now becomes a cudgel, a threat dangling over workers’ heads, increasing their dependence on the boss. Even the most well-meaning employer should not have such power; Dobbs, decided by a vehemently anti-worker Supreme Court, hands it right to them.