food How To Trick Your Brain Into Better Eating Habits

Research shows that the ways we engage with our food--appearance, smell, utensils, even background music--play a role in how healthily we eat. 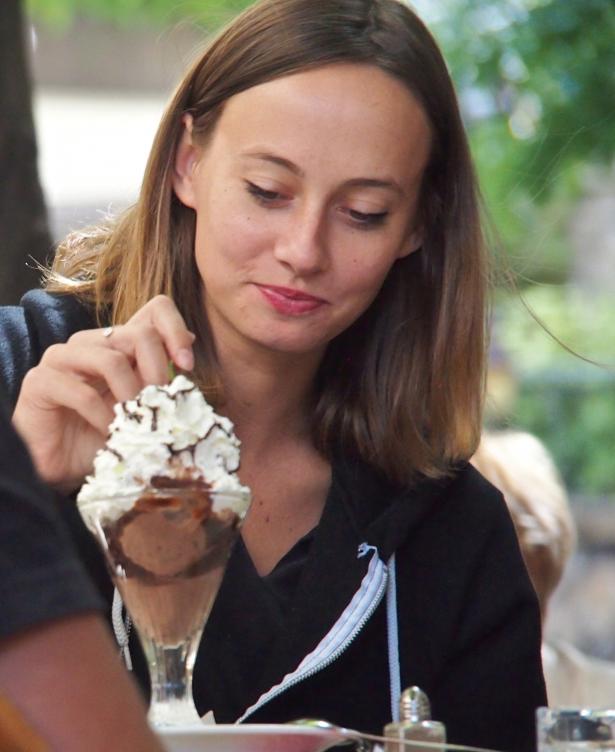 Really engage with your food. ,jeannetteferrary.photoshelter.com

Before diving in at a dinner party, my friend Lizzie always makes a point of asking the host to describe each dish they’ve made. It’s a way of acknowledging their efforts – but, according to food psychology, she could also be helping herself and her fellow diners eat better by making them more mindful of their meal.

Charles Spence is a professor of experimental psychology at Oxford University, who researches the factors that influence what we choose to eat and what we think about the experience. His research highlights the extent to which those choices are shaped by the ways in which we engage with our food; in short, what our meals look and smell like, whether we eat them with forks or fingers – even the music we’re listening to while eating or food shopping can all play a role in how healthily we eat. The following techniques will help you “trick” your brain into making better decisions for your body.

Use heavier cutlery or – better still – no cutlery at all

Many of us now know that serving meals on a smaller plate can control how much we eat, because our brains believe there to be more food there than there actually is. This has a profound effect on satiety (how full you feel), yet the brain can also be fooled by the tools we use: heavier cutlery enhances our appreciation of it, as does eating with our hands, which engages our senses and makes us more mindful. “With a fork, you don’t have to think about it,” says Spence. He cites the example of chef Andoni Aduriz of the world-famous Mugaritz restaurant in Errenteria, northern Spain, who has taken cutlery away for all courses in order to make people “think more about how they interact with their food”.

Make eating as sensory an experience as possible

“Anything you can do to pay more attention and eat more slowly, to be more mindful in the moment, will likely enhance the sensations associated with eating and mean that you are satisfied with less,” says Spence. Not only will this affect satiety, it could also help you make healthier choices – and enjoy those choices more. “If it’s true that 75%-95% of what we taste, we really smell, then the aroma is really important. Yet many of our food behaviours are not optimised for that. If you’re drinking coffee from a takeaway cup with a lid, you’re missing a key part of the experience,” he says – one which would be enhanced by smelling the aroma wafting out of a beautiful mug while cupping your hands around it. Enjoy your first coffee like that, and perhaps you won’t feel so tempted by a second. This example also highlights the role touch can play in satiety and satisfaction. Spence believes one of the reasons behind the rising popularity of bowl food in recent years is that you can pick it up and bring it closer to you: “Feeling its weight and warmth, breathing in the scent – it helps to maximise the multisensory experience.”

Cook – and eat – with your eyes

As Roman gourmand Apicius famously noted – and food psychologists have since proven – we eat first with our eyes, and that dictates much of our experience. Indeed, by shaping our expectations, the appearance of foods has even been shown to influence what we taste when we eat them; so a big, beautiful salad boasting a variety of leaves and colours and textures won’t just look better than a handful of spinach; it will taste better, too. We should also remember that we eat with our eyes when it comes to premade food, Spence says – particularly when it’s something asymmetrical (or without a uniform appearance). For all the heated discussion about which way round to eat a chocolate digestive – to flip or not to flip – it seems eating it chocolate side up maximises our sensory experience, because it is the energy-dense, chocolatey top our brains find so appealing.

There’s a reason the first bite of a chocolate bar tastes better than subsequent bites; the first bite is novel, then our tastebuds become habituated. “Even when the flavour of each bite or slurp is slightly different, if it looks the same our brain tends to assume that the taste also remains the same,” Spence says. The flipside of that is that we can use this reaction to our advantage and reduce the quantity of unhealthy food we consume by packing as much of it as possible into that first mouthful. This is harder to do at home but it is coming into play in the design of readymade foods. “Some companies are now designing foods with asymmetric ingredients,” says Spence: for example, at Unilever Research, readymade lasagnes are made with salt sprinkled on alternate layers.

Choose your music carefully – and turn down the volume

“A lot of the literature in sensory marketing shows that you can change people’s food choices with music,” says Spence. For example, people will drink about 30% more if the music is fast and loud. There is emerging evidence to suggest loud noises trigger less healthy food behaviours – “which might be because there’s so much noise, you can’t really taste what you’re eating”. Genre matters too: listening to jazz and classical music increases people’s preferences for healthy savoury foods more than American rock, for example, which leads us more towards burger and chips; something to bear in mind if you’re listening to music while shopping. Spence is increasingly interested in whether the sounds of nature can influence our decision to make healthier food choices; ina study by Portuguese researchers, a supermarket played the sound of the sea near the fish counter and fish sales rose dramatically. “We know being exposed to nature is good for mental wellbeing, and I can’t help but wonder if playing these soundscapes harnesses that.”

Make shared meals as engaging and memorable as possible

It is true that we tend to eat more in the company of others – “but one doesn’t want to recommend eating alone,” says Spence – at least, not habitually. There are ways to enhance the sensory experience of a communal meal and encourage diners to focus on the food as well as the conversation. One is to get people involved in the process: serving up in dishes so they can help themselves or encouraging them to customise their plate with, say, herbs or seasonings. “It elicits the so-called Ikea effect. They feel ownership for what they’re eating.” Multiple courses, rather than one big spread, also creates “hooks for memory” – and, helpfully, slows people down. Finally, Spence agrees with my friend Lizzie. “It strikes me how often you go to people’s houses, and they’ve made food, and we don’t discuss it; and how nice it would be if they were to describe, say, the carrots as zingy.” When it comes to eating more mindfully, there’s a lot to be said for simply talking about the food more.

...we have a small favour to ask. Tens of millions have placed their trust in the Guardian’s fearless journalism since we started publishing 200 years ago, turning to us in moments of crisis, uncertainty, solidarity and hope. More than 1.5 million supporters, from 180 countries, now power us financially – keeping us open to all, and fiercely independent.

Every contribution, however big or small, powers our journalism and sustains our future. Support the Guardian from as little as $1 – it only takes a minute. If you can, please consider supporting us wit